It might still be summer, but what looks like the first snowfall of the season has come down decently close to Calgary.

The cold weather we’ve been seeing mixed with a bit of rain to bring down a few premature flakes early this morning, and it was all caught on a traffic camera set up on Highway 1 near Canmore just east of Deadman’s Flats Overpass.

The snow had stopped by dawn, and while no trace could be seen by 7:22 am, that early morning dusting is just a glimpse of what is to come for the Rocky Mountains and the areas around Calgary as we head into fall and winter. 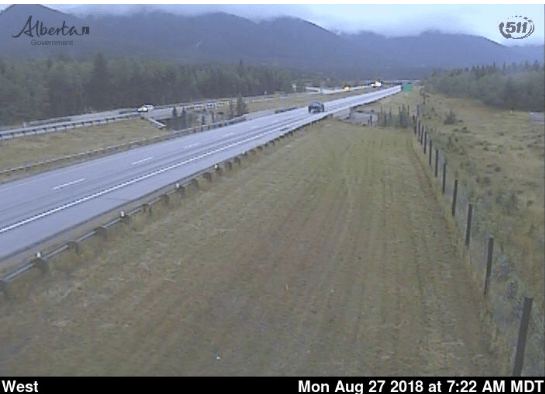 A traffic cam near Canmore (roadreports.ama.ab.ca)

According to this year’s forecast from the Old Farmer’s Almanac, Calgary’s temperatures will be colder than normal, with above-normal precipitation and snowfall.

Taking a look at things a little closer to the present finds a bright and sunny week for Calgary, though getting unseasonably cold in the night.

Monday night will get all the way down to 5°C, so it’s definitely not a stretch of the imagination to think that Canmore — which has an altitude over 1,000 feet higher than Calgary, mind you — has seen some snow on August 27.