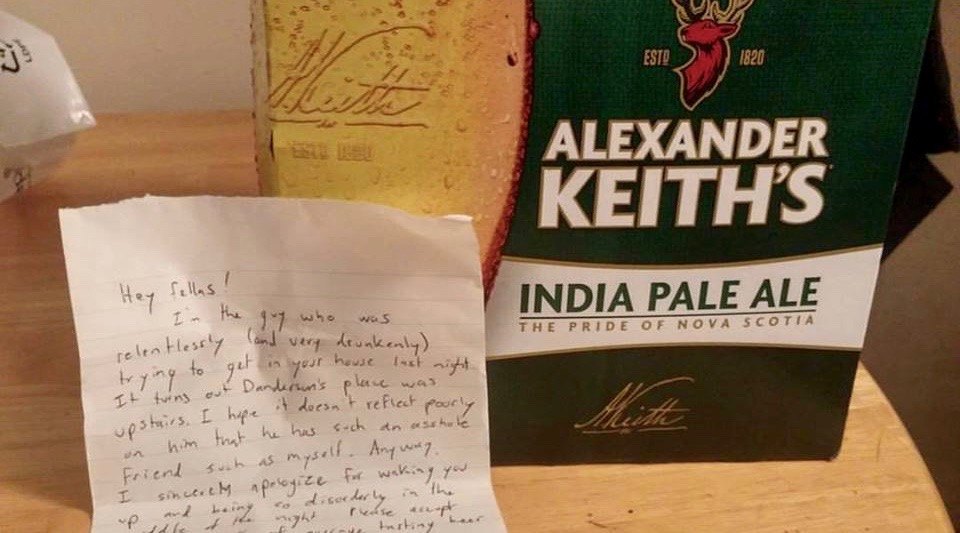 And we say that knowing we’re a nation or sorryers.

Earlier this month, Caitlynne Hines found a note, and a case of Keith’s, waiting for her at her home in Halifax, NS. She posted a photo of the apology alongside the beer online with the following caption:

Shout out to the guy who tried to break into our house at 4a.m. last night and left apology beer on the step this afternoon.

Since then, Hines’ post has been shared nearly 1,000 times on Facebook and garnered more than a hundred comments:

It turns out the guy trying to break into her house was ‘very drunkenly’ confused about which apartment he was trying to enter, due to his friend occupying the apartment above Hines’ in the house.

The 6-pack is a sweet move by any standards, but it’s the note’s P.S. that seals this apology with a smile.

Most Canadian apology ever…

I’m the guy who was relentlessly (and very drunkenly) trying to get into your house last night.

It turns out Danderson’s place was upstairs. I hope it doesn’t reflect poorly on him that he has such an asshole friend such as myself.

Anyway, I sincerely apologize for waking you up and being so disorderly in the middle of the night. Please accept this six pack of average tasting beer as a token of my appreciation.

P.S. I walked like 8km to some random girl’s house after all that. It was the best of times, it was the worst of times.