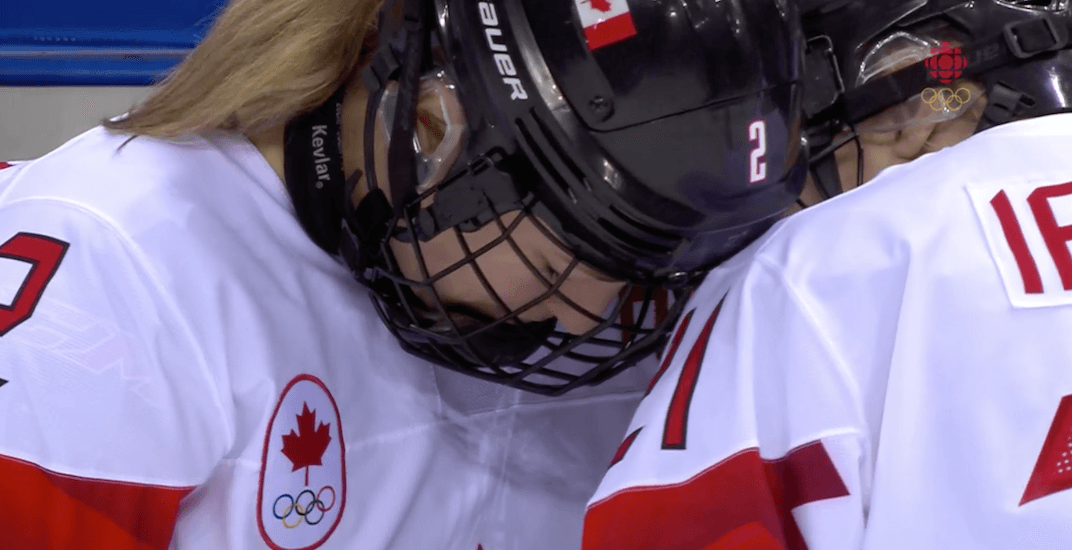 Canada and the United States played another classic for the gold medal in Olympic women’s hockey. A battle until the bitter end, the Americans won the game 3-2 in a shootout.

Both teams put forth a valiant effort through 60 minutes of regulation time and 20 minutes of four-on-four overtime. Nail-biting, edge of your seat stuff, it even had Scott Moir fired up.

USA took a 1-0 lead on a power play goal from Hilary Knight in the last minute of the third period.

#USA finally converts on a PP, Hilary Knight makes it 1-0 for the Americans

#CAN IS ON THE BOARD

Haley Irwin scores and we're all tied up at 1

But a bad line change with under seven minutes left in the third period opened the door for the Americans, who capitalized. Monique Lamoureux-Morando scored on the resulting breakaway.

But really, what would the #gold medal game be without a 3rd period tie?

Though the game went to a shootout, it should be said that USA deserved to win. If not for goaltender Shannon Szabados, it could have been over much sooner. USA had more of the run of play through most of the game, and increasingly so in overtime.

Still, Canada had a glorious chance to win with an overtime power play.

USA outscored Canada 3-2 in the shootout, with Jocelyne Lamoureux-Davidson getting the winner. Meghan Agosta, who scored in the second round, had the last chance for Canada. She was unable to beat American goalie Maddie Rooney.

This is USA’s first gold medal in women’s hockey since it debuted at the Olympics in 1998. Canada had won the last four gold medal games – three of which came against the Americans.

Canada will settle for silver, as they did in 1998. Finland wins bronze.