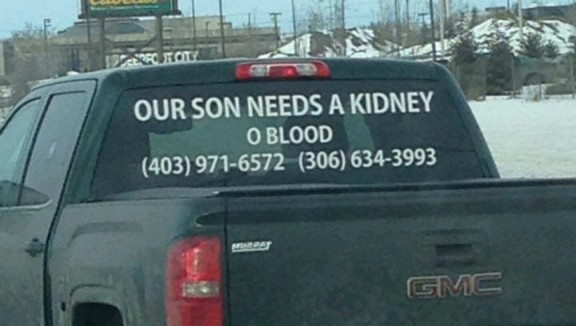 Ryan Mclennan has been dealing with kidney failure since 2003. Now he needs a donor and his family is doing whatever it takes to get the word out.

Now his name and story is emblazoned on everything from trucks and billboards across Calgary.

Everyone in his family is determined to find a living donor that’s a match for his rare type-O blood.

What began as a small poster asking for potential donors to come forward, hung in the window of a family member’s restaurant, has grown into 27 full panel advertisements across the city, and has been drawing interest from around the world.

Besides Canada, messages of support have come in from Malaysia, Finland, Romania, and the USA.

“This has definitely changed our lives,” said his wife, Shakina. “The response from the billboard has been really good.”

Besides the billboards, six people, McLennan’s parents included, drive their vehicles decals asking for donors to contact them.

One of 27 billboards purchased by Ryan McIennan and his family. (Mclennan Family)

Initially drawing a large amount of attention, interest has dwindled and a donor yet to be found.

“The response has been slowing down a lot,” says Shakina. “We are looking at other alternative ways to get our story out there to find more help.”

A former mechanic, McIennan became a teacher when his health made it impossible to handle the physical aspects of the job.

Both doctors and McIennan have no idea what caused his kidney’s to fail. The condition was only discovered after a new job on a cruise ship required a physical.

“I didn’t believe them,” McIennan said. “For a few months, I believed that there must have been some mistake.”

McIennan’s life completely changed after the diagnose. Medical expenses ate away at his savings. Desperate, he moved back in with his mother, Elaine Austin.

“If it wasn’t for my mom, I would have been sleeping on the streets.”

Austin even donated a kidney to her son in 2003.

“She took me in, she took care of me, and she gave me a life once again.”

However, as time goes on McIennan’s condition has worsened, leaving him with only six percent kidney function and needing another transplant.

Currently, he is being treated using peritoneal dialysis, a procedure in which the peritoneal membrane – located in the abdominal cavity – is used to filter blood.

This is keeping him alive, but the process is causing him incredible pain.

In spite of this, McIennan remains optimistic.

“If there is one positive thing I got from this experience, it’s the kindness, support, encouragement and help I received from everyone.

“There are not enough words to describe how thankful I am.”