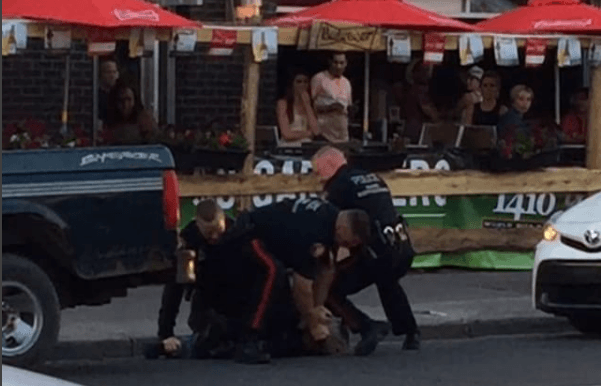 The video circulating various social media channels was posted by jk00ks on Instragram late Friday night and has already amassed over 3,000 views on Instagram at the time publish.

The Calgary Police Department state that the video only tells a part of the story. They have posted the following response on their Facebook page:

The Calgary Police Service is aware of a video that is circulating on social media today showing the arrest of a man in the downtown area yesterday evening.

Officers were conducting a walk-through of licensed premises in the area, when they were alerted by citizens to a situation unfolding in the street. The officers left the bar to determine what was occurring.
They were immediately approached by an aggressive man who refused to cooperate with their demands and then attempted to leave the area.

This man had exited his vehicle following a road rage incident involving a pedestrian, and refused police requests to provide information about his identity.

This video only captures a small portion of the interaction between the man and the officers and does not tell the full story.

This man was given a ticket for stunting after driving in an unsafe manner along the roadway and was released following his arrest.
The CPS encourages anyone with a concern to file a complaint with the Professional Standards Section.