The towering ski jumps at Calgary Olympic Park (COP) are some of the most iconic landmarks in the skyline to the west, and they could have a new lease on life from the construction of a new tower of another type.

WinSport, the non-profit organization that owns and operates COP, is seriously considering a major mixed-use redevelopment of one of its parking lots to help fund the continuity or replacement of the ski jumps and other facilities at the recreational park.

The tentative proposal would redevelop the large parking lot north of Frank King Day Lodge into a 913-foot-tall, 73-storey tower, making it the tallest building in the city.

It will have an indoor mall with 50 shops and restaurants within a two-storey podium, 462 guest rooms within a four-star hotel within the first 32 storeys of the tower, and 514 upscale market condominium units within the upper levels.

Revenue generated by the new redevelopment will go towards the construction cost of modifying the ski jumps or building new ski jumps that meet the latest international competition standards. 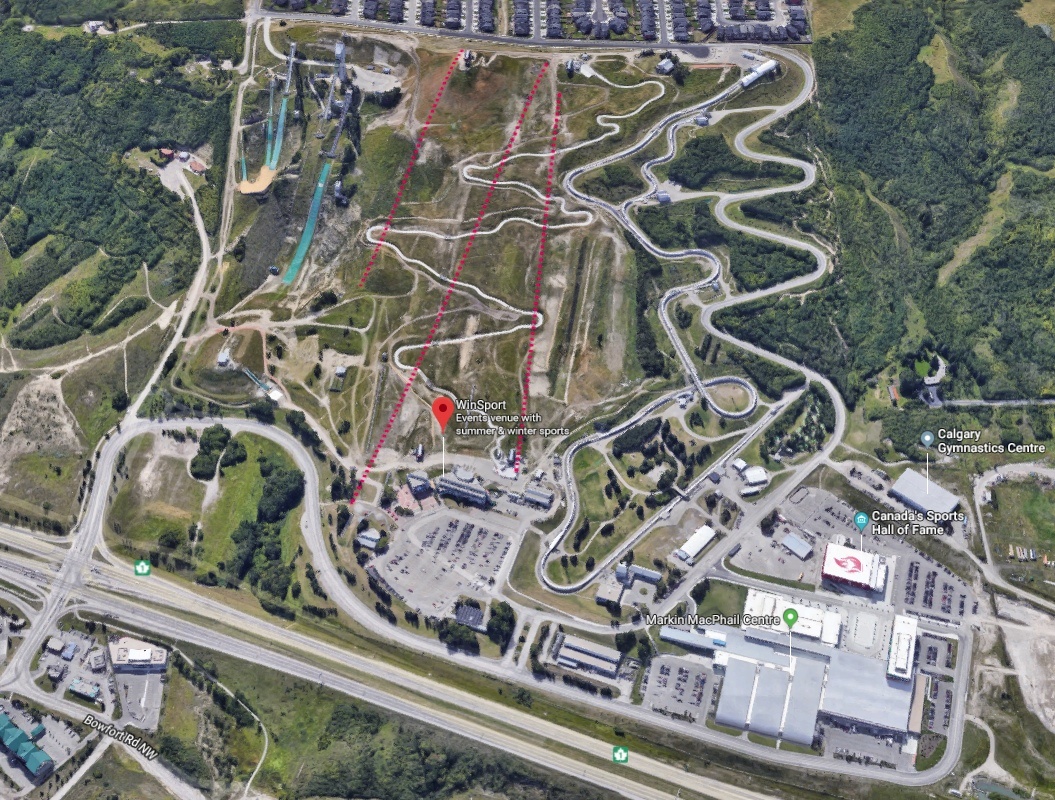 When complete, the skyscraper will also provide a continuous stream of revenue that will not only cover the annual operational cost of the ski jumps but also other facilities such as the ski terrain, luge track, and arenas.

“We’re really doing our best to ensure the legacies of Calgary 1988 remain strong or at least the spirit of those legacies in all of their forms,” said Matti Ploc, the director of strategy for WinSport.

“We’ve been reevaluating how we use our assets and determining the best way to extract more value out of them.”

Ploc added that WinSport has had early discussions with both the City of Calgary and the team putting together Calgary’s potential 2026 Winter Olympics bid.

A private developer has also been chosen, but they are not revealing their partner company and building design at the moment. It is also unclear exactly how much revenue the redevelopment could raise.

COP currently has six jumps ranging in size, including a 30-metre training jump and three towers at 50 metres, 70 metres, and 90 metres. None of these jumps are suitable for international competitions.

Regardless of whether the ski jump is modified or replaced, a far larger landing area than what was built in 1988 will be required and it may even necessitate the demolition of a portion of the mountain bike park and a reroute of Canada Olympic Drive SW, as present day ski jumpers would likely be flying over the roadway with the latest advances in the sport.

During the 1988 Games, wild chinook winds forced organizers to reschedule bobsled, luge, and ski jumping events held at the Olympic Park due to dangerous conditions. The ski jumping venue was originally planned for the nearby town of Bragg Creek, but it was relocated to Calgary due to local opposition.

If the skyscraper approach does not receive approval, the existing ski jump towers will be fully decommissioned and demolished as funding to keep the facility operational has ended. The future over the ski jumps has been up in the air for years, and in 2015 a $225,000 contribution over three years was provided by the Canadian Olympic Committee to keep the jumps open for training purposes until after the Pyeongchang 2018 Games.