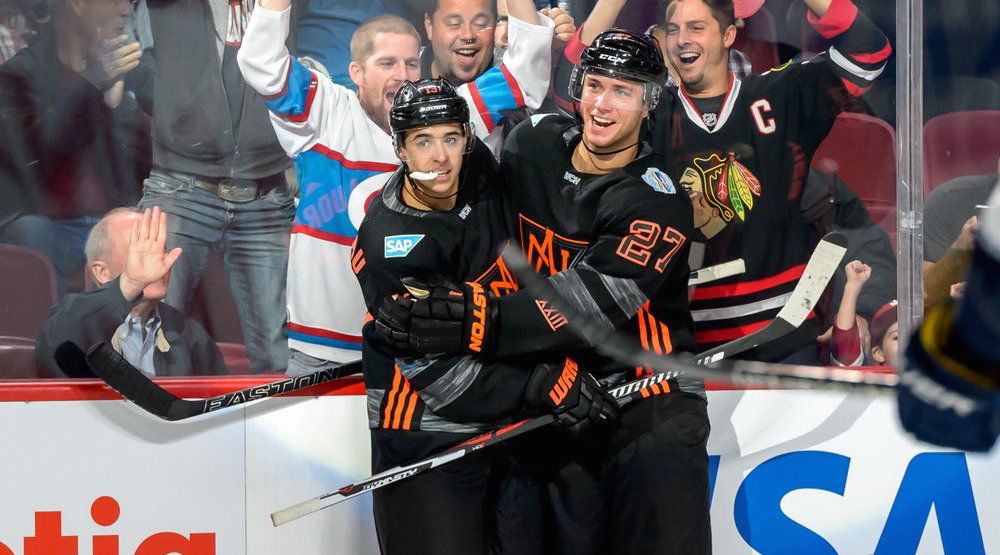 Plenty of phrases have been used to describe the upcoming World Cup of Hockey.

A display of hockey’s elite talent, a gimmick, an exciting best-on-best tournament, and even an embarrassment by some hockey purists.

While the full impact of the tournament probably won’t be felt for weeks or even months, Calgary Flames fans can expect to see some of their favourite players in the Toronto-based tourney.

With a back injury holding Sean Monahan off Team North America, the Flames are sending three roster players and two free agents, though one of those free agents is more likely to ink a contract than the other.

Without further adieu, here are some projections for Calgary’s five players at the 2016 World Cup of Hockey:

"He's a game-changer in my opinion."
Johnny Gaudreau is impressing at #TeamNA camp: https://t.co/smPtgPjfjT #WCH2016 pic.twitter.com/nxmQBJWW5C

The most high-profile Flame to suit up at this year’s World Cup, Johnny Gaudreau will be under the microscope for his on-ice contributions, as well as his ongoing contract talks.

Still without a contract for the upcoming season, Gaudreau had said he wants to focus on his play at the tournament and would not negotiate a new deal with GM Brad Treliving during this time. Although his rights remain with Calgary as a restricted free agent, Flames fans are becoming more restless as opening day of the NHL season approaches.

Expected to be a key contributor on Team North America, Gaudreau finished as the highest scoring North American player last year with 78 points in 79 games. Skating on a line with wunderkinds Connor McDavid and Jack Eichel, Gaudreau will get the opportunity to flex his offensive muscles that he’s developed after two seasons with Calgary.

Playing in an exhibition game against Team Europe, Gaudreau scored a backhand, highlight reel marker for his second goal of the evening. Expect more of the same from #13 throughout the tournament, as his line mates are two of the fastest rising players in the sport.

Team North America will likely go as far as their goaltending will take them, but with Gaudreau playing top-line minutes, points shouldn’t be hard to come by for this ‘young guns’ squad.

"It's a dream come true." – Mikael Backlund on playing in the #WCH2016 ~ https://t.co/0LkqPUfZE0 pic.twitter.com/WCLiwhhtot

Passed over for Sweden’s Olympic team in 2014, it’s a safe bet to say Mikael Backlund will try to get the most out of his World Cup experience.

An omission again for Sweden’s final roster, Backlund answered the call to join the ‘Tre Kronor’ after captain Henrik Zetterberg pulled out of the tournament with a knee injury.

A strong two-way player on the NHL sized ice, Backlund posted career highs of 82 games played, 21 goals, and 47 points as a checking centreman for the Flames in 2015-16. Playing his best hockey with like-minded wingers, Backlund would be best suited to play alongside strong two-way forwards like Colorado’s Gabriel Landeskog or St. Louis’ Patrik Berglund.

Due to being a later addition to the team, Backlund has bounced around from Sweden’s 13th forward to a checking role on the third line.

With an all-star heavy defence and Henrik Lundqvist between the pipes, Sweden has a great shot at moving onto the knockout stage and potentially a finals berth.

#Flames GM Brad Treliving is hopeful Jyrki Jokipakka will be ready to play at the #WCH2016 ~ https://t.co/abVmUSrAqU pic.twitter.com/Ido79LRN7y

Although he goes by ‘Kevin’ in the Flames dressing room, Jyrki Jokipakka will feel right at home with a scrappy Finland team at the World Cup.

Brought over to Calgary in the Kris Russell trade from Dallas, Jokipakka scored six points in 18 games down the stretch drive of the 2015-16 campaign in a bottom-pairing role.

Despite undergoing hip surgery during the off-season, the big 6’3” blueliner elected to participate in the tournament. That decision seems to be paying dividends for the Tampere native, as he has been paired with Anaheim Ducks stalwart Sami Vatanen on the Finns’ second defensive pairing.

Jokipakka will also be looking for his first international medal, as he recorded a pair of 6th place finishes with Finland at the 2011 World Juniors and 2015 World Championships.

Although they boast a strong goaltending tandem of Pekka Rinne and Tuukka Rask, an average forward and defence core might make a playoff berth a tough task for the Finns.

Congrats to Michael Frolik on being named to the Czech Republic's 2016 World Cup of Hockey roster! #WCH2016 pic.twitter.com/xArhQCk4gr

The definition of an international veteran, this will be Michael Frolik’s 11th appearance for the Czech national team.

Picking up an impressive five bronze medals over his career, Frolik will be relied upon for secondary scoring by the Czechs, much like he has over seven NHL seasons.

With offence first players like Jakub Voracek, Ondrej Palat, and Tomas Plekanec dotting the Czech roster, Calgary’s Frolik will provide a defensive presence and will attempt to shut down some of the planet’s top offensive stars.

Scoring will be expected out of the former Rimouski Oceanic star however, as he scored 15 goals and 32 points in his first season in Flames silks last year. Injuries to David Krejci and Tomas Hertl ahead of the tournament will also open up some valuable ice time for players like Frolik.

Expect Frolik to play alongside the likes of Ales Hemsky, Martin Hanzal, and former Calgary product Roman Cervenka either on the second or third lines.

"I think I can play in the NHL & I believe in myself." – Jakub Nakladal ~ https://t.co/FJnppcoeQ1 pic.twitter.com/0mDCS3i4oQ

The second Flame to crack the Czech Republic, Jakub Nakladal is technically a free agent but is listed as a Flames player for the tournament.

Bouncing between Calgary and the Stockton Heat last year, he played in 27 NHL games posting five points and six penalty minutes after signing a one-year contract.

Preliminary paired with Carolina’s Michal Jordan (not to be confused with the 14-time NBA All-Star), Nakladal could climb as high as the second line or sit out games in the press box. With Chicago’s Michal Kempny serving as the team’s highest scoring blueliner, there is plenty of opportunity on the Czech defence.

More than anything, this tournament could serve as a try-out of sorts for Nakladal, as he tries to earn himself an NHL contract ahead of the start of the 2016-17 campaign.

Although the 2016 World Cup has drawn ire from some hockey fans, the buzz surrounding the event can’t be ignored with the top hockey players in the world converging on the Air Canada Centre.

In time these Flames will become teammates once again in a chase for Lord Stanley’s Cup. But for two weeks it’s country vs. country (vs. continent), and the spotlight will remain fixed on this goofy, exciting, intriguing tournament.