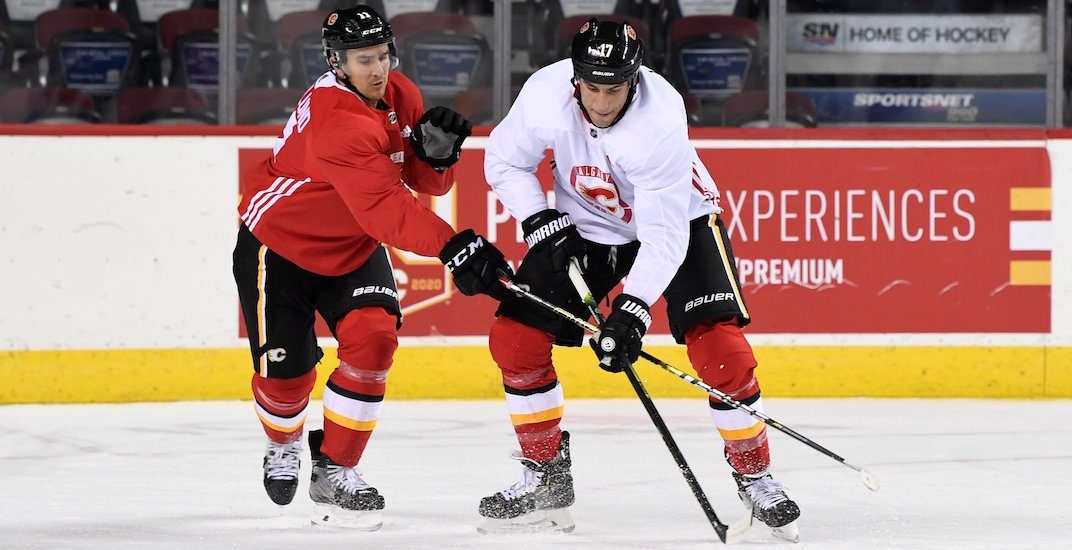 The puck drops on the NHL preseason for the Calgary Flames tonight.

They’ll play not one, but two games, against a pair of Vancouver Canucks split squads.

After hosting training camp the Canucks the past three days, Victoria will be the site of the Flames’ away game. That game begins at 8 pm MT and can be seen on Sportsnet.

Most of the Flames’ top players will remain in Calgary, where they’ll take on the Canucks at the Scotiabank Saddledome. The top line of Johnny Gaudreau, Sean Monahan, and Elias Lindholm will suit up, as will Milan Lucic, who makes his Flames preseason debut.

#Flames projected lines and pairings for home game vs. #Canucks:

The game in Calgary will be broadcasted via live stream on CalgaryFlames.com at 7 pm MT. Here are the lines and defence pairings for the Canucks for that one:

This group skated already and is en route to Calgary. ✈️ pic.twitter.com/tDKXfFSlYc

An undermanned group of Flames will play at the Save-On-Foods Memorial Centre in Victoria, while the Canucks dress a more representative lineup.

This group is currently on the ice and will face the Flames at the Save-On-Foods Memorial Centre in Victoria.

Here’s how the Flames’ lineup will look in Victoria:

#Flames split-squad going to Victoria tonight looks like this:

The Flames will play eight preseason games this year before the regular season begins on October 3. The San Jose Sharks visit the Saddledome next on Wednesday.