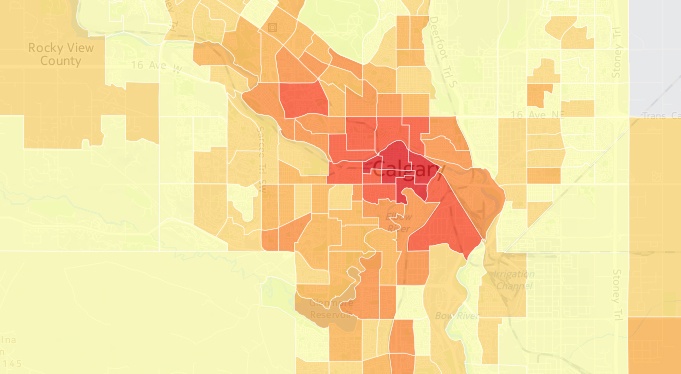 Map of walking commute in Calgary (The 10 and 3)

A set of new transport heat maps, created by data visualization website The 10 and 3, is revealing how Calgarians really get through their commute.

Arik Motskin and Zack Gallinger used data from the 2011 National Household Survey to map how working residents get between home and work.

Motskin told Daily Hive he wasn’t surprised to find Calgary was still dominated by cars. But he was surprised by the low numbers using public transit.

“It seems like surprisingly few people are choosing to take public transit even when they live near C-train stations,” said Motskin.

“Despite how bad traffic is getting in the city, people still choose to drive their cars when there are reasonable alternatives.”

According to the team’s findings, published online in a blogpost, almost 90% of Calgary residents live in low density suburban environments.

And outside of the city centre, they found, more than three quarters of commuters are hitting the road by car each day for what can be a long and gruelling trip.

“Only deep in the city centre does the reliance on cars dip substantially,” reads the post. “Yet even there, over 20% of Calgarians are driving to work.”

“But the news is not all grim,” reads the blogpost. “The C-train [boasts] the second highest ridership among all light rail systems in North America.

“Public transit usage appears to continue growing in Calgary, despite the city’s continual sprawl in all directions.”

The team found along much of the C-train’s blue and red lines, at least 20% of commuters use public transit to get to work, with a peak of 36.1% in the Downtown West End.

That still looks pretty lame however, compared to Toronto, where the team found more than 60% of residents rely on public transit in that city’s hottest spots.

Biking is even less popular in Calgary, despite numbers of cyclists being on the rise in neighbourhoods like Parkdale and Ramsay.

“The cycling rate is remarkably low downtown,” said Motskin, who admits the data is already a few years old and pre-dates efforts by the city to encourage cycling.

“Nevertheless, it shows what kind of serious cultural challenges the city is up against to get people riding their bikes.”

The team found outside of a few select areas within the city, cycling appears to be a non-starter for most commuters, the preferred choice of fewer than 2% of people going to work.

Of course, Calgarians may not bike like Vancouverites, and they may not ride transit like Torontonians, but they are a tough lot.

According to the team’s findings, more than 40% of Downtown residents walk to work, even in the winter.

To see the full interactive maps, head over to The 10 and 3.