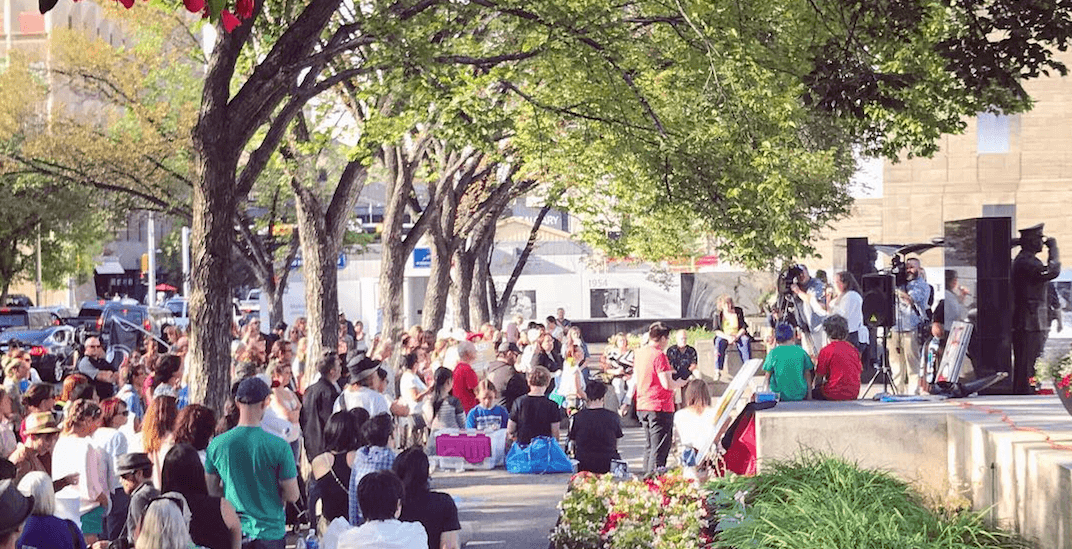 A vigil was held Wednesday, August 16 at Calgary’s City Hall to show solidarity with the anti-fascists in Charlottesville.

The Calgary Anti-Fascist Action group organized the event posting this on their Facebook event page:

“On August 12 white-supremacist, fascist violence erupted in Charlottesville, Virginia. Anti-fascists from various backgrounds organised and protested the “Unite the Right” rally, a national gathering point for American white supremacists. However, the latter responded with violence including one fascist who rammed his car into a crowd of anti-fascist activists. Nineteen people were injured and one, Heather Heyer, was killed.

This is the most recent occurrence in the growing wave of far-right violence in North America, and which is targeted at Muslims, Jews, People of Colour, Queer and Trans people as well as at anti-fascists. These acts of fascist terror are carried out in the name of re-asserting the white supremacist, Western imperialist, and patriarchal order they feel is under threat.

Please join Calgary Anti-Fascist Action in showing solidarity with the anti-fascists in Charlottesville, in remembering and honouring both those who were injured and our fellow anti-fascist who was murdered, Heather Heyer. ”

Over 100 Calgarians showed up to the event Wednesday evening.

Vigil for #charlottesville and #heatherheyer in #yyc

Just attended the #yyc vigil for #Heatherheyer, so much love for her and what she fought for. We all need to stand up against intolerance. Be vocal, be present and take action if need be. Be safe everyone. #standup #heatherheyer #antifascist #yyc #vigil #love #bepresent #besafe