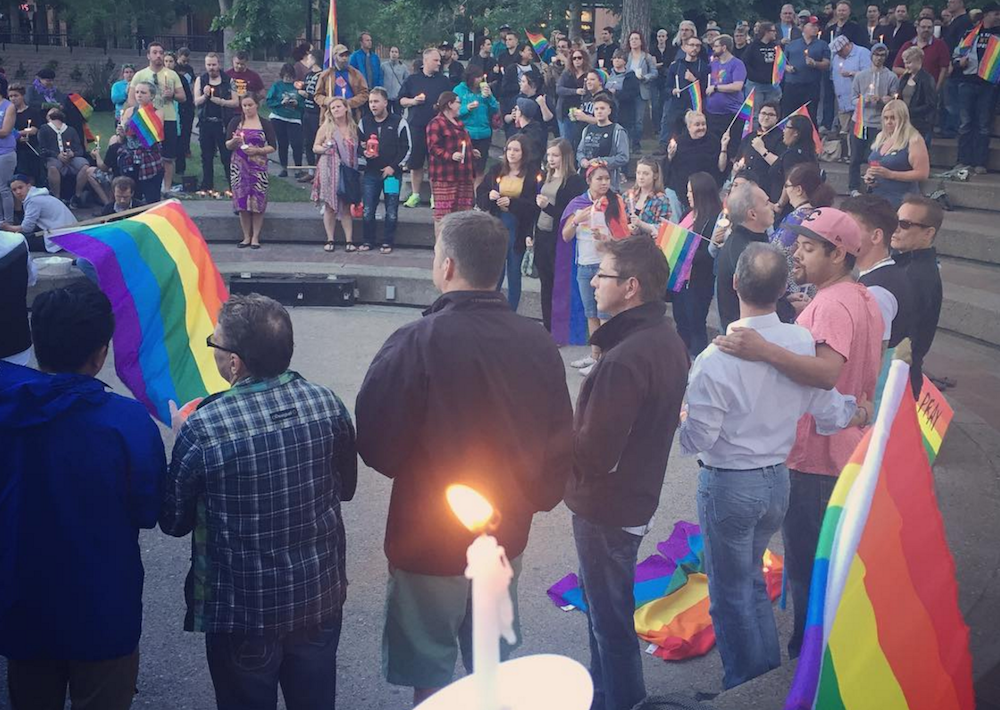 On Sunday evening, around 500 Calgarians gathered at Olympic Plaza for a candlelight vigil held in remembrance of the Orlando nightclub massacre victims.

Early Sunday morning at Pulse Nightclub in Orlando, Florida, 50 people were killed and over 50 were injured when shots began ringing out at about 2 am local time.

The Calgary Tower, Langevin Bridge and Stephen avenue were lit in rainbow colours to show solidarity with the LGBTQ community. In Edmonton, flags at the legislature were lowered to half-staff.

#ableg flags flying at half mast. Our thoughts are with the victims & their partners & loved ones. #OrlandoShooting pic.twitter.com/N5BCTVmpXt

We mourn and cry and hope in solidarity. May vigils become obsolete. #yyc4orlando pic.twitter.com/DMB8hOhevB

Human rights are human rights. And neighbours are neighbours. Thanks #yyc. #yyc4orlando pic.twitter.com/Wc7j5YryKD

don’t let them erase who you are. don’t let the lives lost be forgotten. continue to spread love, because fear and hate will never, ever win. #yyc4orlando #rip

Tonight with @carlos.corp, @mikebaut, @permanenttouristyyc, @hitorikanazaki and hundreds of other Calgarians, we all came together for a candle light vigil to mourn and stand up for those lost in the tragic Orlando shootings. It was touching to feel the solidarity amongst our LGBTQ brothers and sisters and our many allies in this thing called life. #insolidarity #yyc4orlando #prayfororlando #noh8

A moment of silence and a moment of noise for the victims of the Orlando shooting. #yyc4orlando