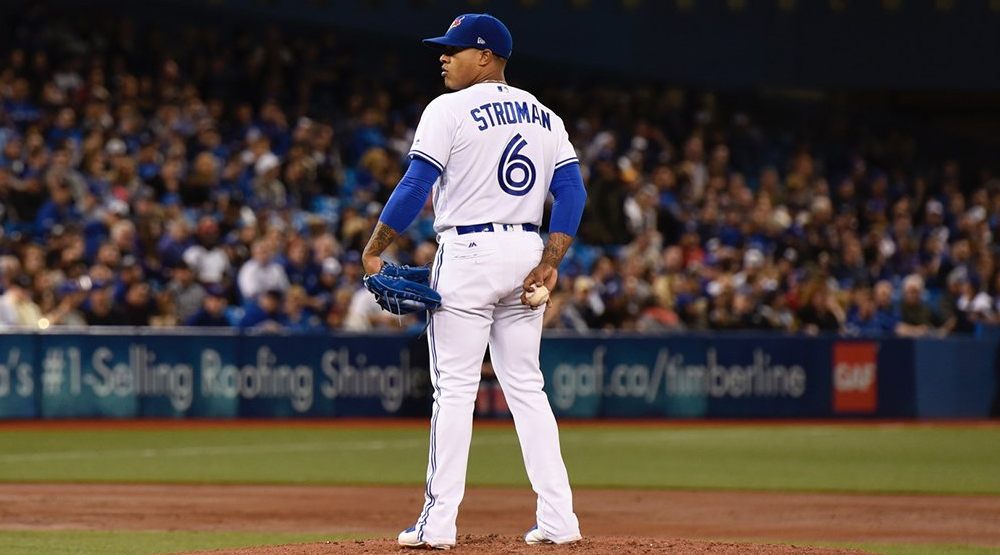 In less than 24 hours, the Toronto Blue Jays unloaded their two most valuable trade pieces: J.A. Happ to the Yankees and Seunghwan Oh to the Rockies. Once initial reports surfaced, it wasn’t long before both deals were finalized, sending both veterans to contending teams.

But the Blue Jays may not be done making moves yet.

The team still has a handful of players on expiring contracts, making them prime trade candidates. Along with playoff rentals, the Blue Jays also have some interesting pieces which contenders would be very interested in acquiring … not only for this year, but down the road as well.

So, which Blue Jays could be traded next? It ranges from a few fan favourites, to some unheralded arms in the bullpen, to a veteran left-handed bat who could beef up a lineup.

Jon Morosi of MLB.com was the latest to report the Blue Jays and Atlanta Braves have discussed a deal for Marcus Stroman. “The Braves and Blue Jays have spoken about a possible Stroman trade,” Morosi says, although there’s no indication of much progress between the teams.

The right-hander has been somewhat of a thorn in the Blue Jays’ side this season, lashing out publicly against the Blue Jays front office and snapping against a member of the media a few weeks ago. Stroman is incredibly talented and enjoyed some successful seasons with the Blue Jays, but there may come a point when the front office feels like the drama isn’t worth it.

One thing working against the Blue Jays here is Stroman’s value isn’t particularly high. Despite setting career bests in strikeouts and ERA last year, the right-hander struggled mightily earlier this season. Before landing on the disabled list in mid-May, Stroman posted a 7.71 ERA in his first seven starts of the season.

Since returning from the DL, Stroman looks like the Stro Show of old again, owning a 3.03 ERA in six starts. He’s seemingly turned the corner on his 2018 season, but Stroman’s value could be much higher this offseason.

However, given the lack of attractive starting pitching options on the trade market, maybe a team comes out of nowhere and offers the Blue Jays a king’s ransom in exchange for Stroman.

After the Blue Jays added Brandon Drury from the J.A. Happ trade, the team has a bit of a logjam when it comes to infielders on the team. Suddenly, someone like Yangervis Solarte looks expendable.

As a switch hitter who can field multiple positions, Solarte is a veritable Swiss Army knife for potential suitors. He’s done an admirable job with the Blue Jays this season, hitting 17 home runs in 98 games, but Solarte fell into a swoon since his early-season tear in April and May.

With two-plus seasons of team control remaining on a club-friendly contract, surely there’s a team who would love Solarte’s versatility. He was one of the most entertaining Blue Jays players to watch in the first half of 2018, slashing .265/.328/.497 with 11 home runs in his first 50 games. In 50 games since, Solarte has fallen back down to earth, hitting .211/.256/.348 with six home runs to his name.

Part of that decline could be attributed to the wear-and-tear of playing every day, but it appears as though Solarte may have already reached his ceiling with the Blue Jays. However, that doesn’t mean he can’t be a useful piece on a playoff-bound team in a part-time capacity.

One of the American League’s most-established closers changed hands earlier this week when the Baltimore Orioles sent Zach Britton to the New York Yankees. Given the controversy surrounding Roberto Osuna, might another AL East closer be in a new uniform later this year?

As of this moment, Roberto Osuna isn’t eligible to return from his suspension until August 5th. By then, the non-waiver trade deadline will have passed, but that doesn’t mean teams won’t inquire with the Blue Jays on the availability of Osuna until the August 31st waiver trade deadline.

The Blue Jays are in an incredibly difficult position with Osuna and so long as he’s in Toronto, his status looms a black cloud over the team. Much like with Stroman, the Jays are better served to explore trading Osuna in the offseason, when they have more time to regroup and decide upon the 23-year-old’s future with the team.

The latest report from Ken Rosenthal of The Athletic reveals the upstart Philadelphia Phillies have interest in the Blue Jays veteran outfielder Curtis Granderson. He’s on a modest one-year deal with the Blue Jays and found himself traded to a contender last season as well.

Granderson is a part-time player on the Blue Jays as-is, which means he’d see even more limited playing time on a contending team. As a veteran left-handed bat who can hit right-handed pitching, he’s a nice piece to have, but teams aren’t clamouring to give up one of their Top 30 prospects for him.

At this point, the Blue Jays should probably just take whatever they can get for Granderson, which won’t be very much in return; perhaps some salary relief or a fringe prospect at best.