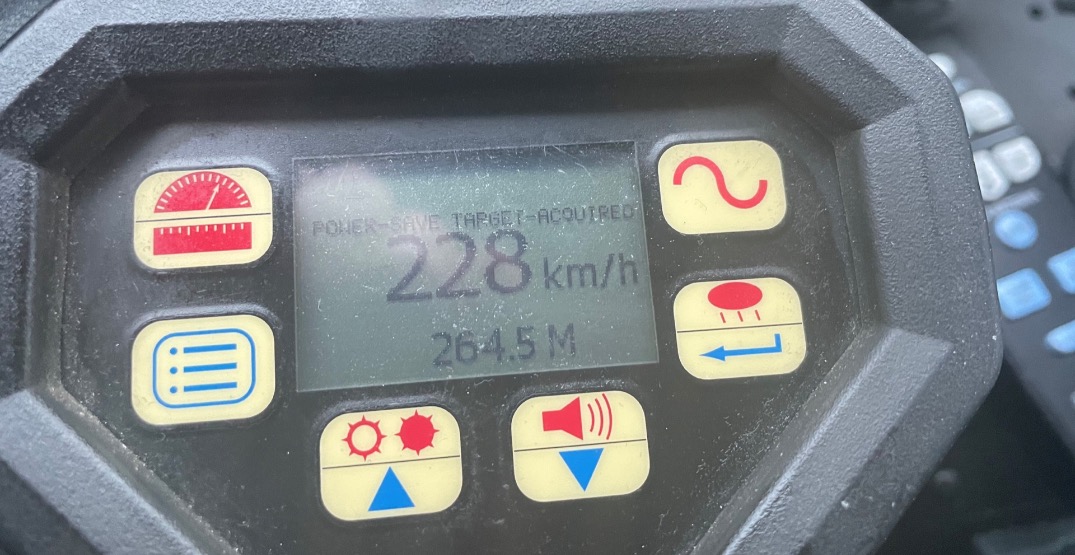 A BMW driver in Alberta will be making an appearance in court after a Sheriff Highway Patrol member clocked them, going more than 100 km/h over the speed limit.

According to a Facebook post from Alberta Sheriffs, the motorist was going 228 km/h in a 110 km/h zone on Monday night.

The sheriff was parked near the intersection of Highway 16 and Range Road 270 in Parkland County a few minutes before 9 pm when he saw the BMW approaching at high speed. A laser reading confirmed the vehicle was going 228 km/h before the driver pulled over.

A 20-year-old man driving the BMW received a court summons, which is automatic in cases when a driver exceeds the posted speed limit by more than 50 km/h.

Upon conviction, the maximum penalty is a $2,000 fine, six months in jail or both. A conviction also carries six demerit points, and the court has an option to suspend the offender’s licence.

The post also alludes to a case last month when a sheriff caught an Alberta driver going 189 km/h in a 110 km/h zone.

The 39-year-old woman was pulled over, and the sheriff demanded a breath sample. The driver failed the initial breath test and an appeal test.

The member immediately seized the vehicle for 30 days, and the driver received an automatic 90-day licence suspension and a $1,200 fine.
To resume driving following the 90-day term, she must participate in the ignition interlock program for a year and attend a mandatory one-day course for first-time offenders.
“Since being given expanded authorities to investigate impaired driving and other criminal offences in July 2021, the Sheriff Highway Patrol has taken nearly 1,700 impaired drivers off provincial highways within their jurisdiction,” the post added.
Alberta Sheriffs cautioned that nearly 25% of fatal collisions involve drivers exceeding the posted speed limit or travelling too fast for weather and road conditions. Speeding can pose a significant threat to the safety of people on highways.