1. Pizza worker on her work break saves a kidnapped child

When Courtney Best was taking a smoke break from her job at Papa Murphy’s pizza in Corpus Christi, Texas, she was not expecting to save a child’s life. “I stepped outside, I was standing by the trashcan, and I [saw] a white car pull up, and I just happen to take my phone with me, cause we don’t look at our phones at work, and I looked down and I saw ‘white Dodge Avenger Amber Alert,’ and I was like, ‘Nah, that’s not [the kidnapper],'” Best told KRIS TV. It turns out the Amber Alert was for a missing seven-year-old named Nicholas Gomez. Best was able to match the license plate on the vehicle she saw with the one mentioned on the Amber Alert. She immediately called the police and authorities were able to save the child.

2. Father saves the day at a wedding when his little girl did not want to be flower girl anymore

When his little girl was too nervous to be the flower girl at a wedding, her dad did the most adorable thing by taking over her job. As she enters the wedding chapel, the crowd frightens her but luckily dad is there to save the day. Watch the video to see how this father becomes the best flower girl ever.

Donald Gould is a 51-year-old homeless man who was recently caught on film playing the piano on one of Florida’s free public street pianos. Gould is a former Marine who also studied music theory in college. After his wife died in 1998, Gould faced some financial challenges and ended up homeless. The video of Gould playing the piano caught the attention of a local news station that looked into his back story. Soon, his former college saw the video and decided to give the man a $30,000 scholarship to return to school. The college will also be providing Gould a life coach to help him stay on the right path and remain off the streets.

4. Teenager wins $10,000 at Calgary Stampede Talent Search competition and donates all of his winnings to local homeless shelter 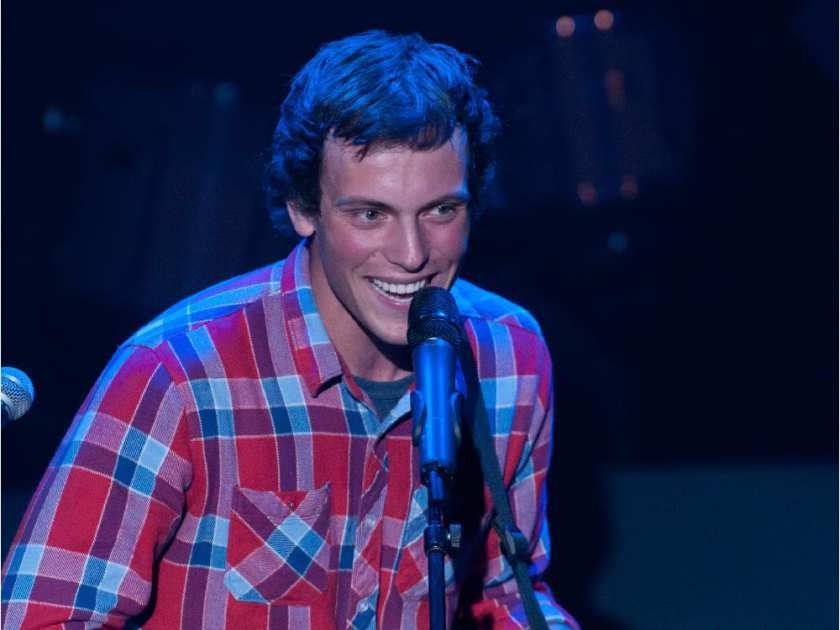 After winning $10,000 at the Calgary Stampede Talent Search competition, 19-year-old singer Christian Hudson knew exactly what he wanted to do with the money. Instead of keeping it for himself, he has decided to donate all of his winnings to the Calgary Drop-In and Rehab Centre. Hudson told reporters he was inspired to donate the money after meeting some people at the shelter and hearing their stories.

“It’s a true testament to the type of individuals we have participating in our competition,” Andrew Bunka, chair of the Talent Search committee, said. “What Christian did tonight shows his generosity and where his values are. I have absolutely no doubt he’s going to take his craft to the next level and make it some day and this will all be something he can look back on and be very proud of.”

5. Long lost identical twins find each other on YouTube

Anais Bordier was in utter shock when she saw a girl who looked exactly like her in a movie trailer on YouTube. At first, Bordier thought that the similarities between her and the girl in the video were a coincidence. But after watching the video over and over again, Bordier had a feeling that the girl who looked like her twin could actually be her twin. Bordier was born in South Korea but resides in France because that is where her adoptive family lives. She was told that by adoption officials that she was an only child and was abandoned at a shelter in South Korea but when she watched the video with the girl who looked exactly like her, Bordier knew that she could very well have sister.

After looking up the cast in the film’s trailer, Bordier found out the name of the girl was Samantha Futerman. She got in contact with Samantha, who lives in the U.S., and the two women discovered that they shared the same birthday and they were born in the same city. After some DNA testing, it was confirmed that the Bordier and Futerman were long lost twins.  The sisters’ story is so captivating that a film is being released about them and how they were able to find one another.

6. Terminal cancer patient gets married from his hospital bed

Keith Borum has gone through some extremely tough times. He has been battling non-Hodgkin’s lymphoma for 18 months and he was recently diagnosed with a cancerous mass in his stomach. He can’t walk because of the pain he is experiencing and as a result he has been a patient at the Good Samaritan Hospital in West Islip, New York, for the last several months. Luckily, Borum has the support of his loving girlfriend Nina Scott, who he has been dating for three years.

Last week, Borum and Scott got married at the hospital and the two were able to share a very special moment that they did not think they would be able to celebrate due to Borum’s illness. “The whole thing was great. I don’t know what my favorite moment was,” said Nina Borum. “I couldn’t imagine how great it could be or would be. The staff just outdid themselves … We couldn’t have done it no better.” Nurses and medical staff at the New York hospital were able to make the day come together by donating flowers, a cake and rings. Borum told reporters that the wedding at the hospital was “the best day of his life.”

7. B.C. bear rescuer who got suspended from his job for refusing to euthanize bear cubs is back on the payroll

A B.C. conservation officer who was suspended without pay after he refused to euthanize two orphan bear cubs is back on payroll. Instead of killing the cubs, Bryce Casavant decided to take the baby bears to the North Island Wildlife Recovery Association rehabilitation facility. He was then suspended without pay for refusing to euthanize the bears despite being ordered to do so.

After news got out of Casavant’s suspension, an online petition collected over 50,000 signatures supporting the reinstatement of the officer. The story also caught the attention of actor and animal activist Ricky Gervais who supported Casavant’s decision to save the bears. The Government and Service Employee’s Union has now confirmed that Casavant is being paid again, although he is still suspended from his job.

After surviving a horrific plane crash that is believed to have killed her grandparents, 16-year-old Autumn Veatch walked through the wilderness for three days before finding safety. Veatch trekked through the harsh terrain of Washington State, surviving on her own after the crash and was able to flag down a passing car after reaching a highway.

The driver of the car drove her to a nearby gas station where she was able to calmly call for help. Veatch miraculously escaped the crash and the wilderness with only a few cuts and bruises. Although the story is bittersweet, Veatch is being credited for her quick thinking and her ability to help rescuers try and recover the bodies of her grandparents. The teenager said that watching survival shows on TV helped her trek through some of the most dangerous forest and mountain terrains in the state.

9. Dog helps save baby dolphin after finding the animal stranded on the beach

After discovering a stranded baby dolphin on the beach, Leia the Cocker Spaniel began to bark in hopes to catch the attention of her owner. “I was taking photos of the fantastic scenery when I heard my dog barking at me from further down the beach… clearly she had found something,” explained Leia’s owner, who is a local fisherman. He was able to free the dolphin back into the ocean all thanks to the dog’s sharp senses.