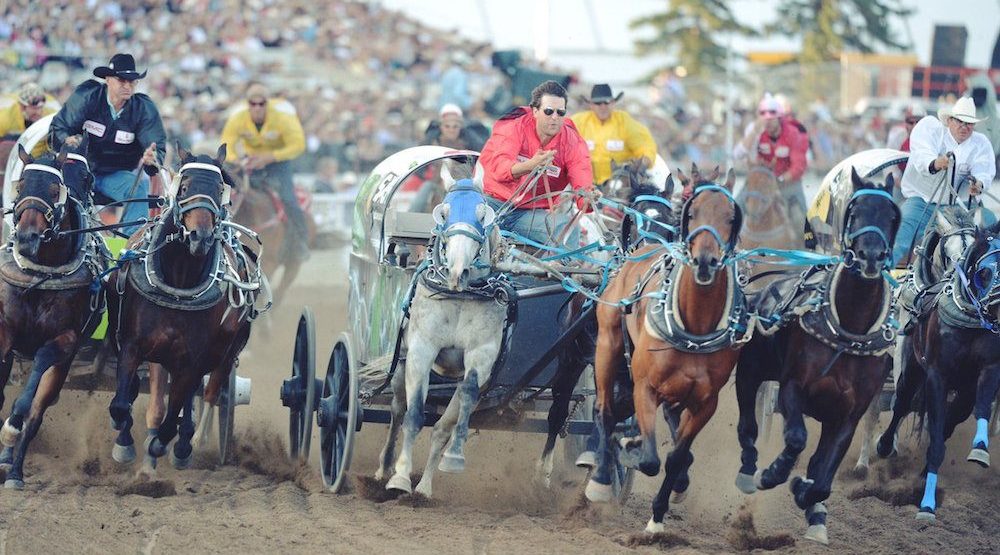 The ‘Greatest Outdoor Show on Earth’ is set to kickoff for its 105th year on July 7, with a number of events hitting the Calgary Stampede Grounds over the 10 day event.

Concerts, rides, and the rodeo are staples year after year, but one of the biggest draws annually is the sixth stop on the chuckwagon racing season.

Calgary will host 36 chuckwagon drivers, as they all compete for the biggest annual payday of their season in the Rangeland Derby.

While chuckwagon racing is ingrained as a piece of Western Canadian culture, the rules and regulations can be confusing if you haven’t spent much time at the track.

Whether you’re going to be viewing the races on TV or actually heading down to watch the chucks live in person, here’s five things to know before watching the 2017 Rangeland Derby:

Often called the ‘half-mile of hell,’ the track at Stampede Park is a gruelling test for the continent’s top chuckwagon drivers.

Racers start in the infield, which is usually used for the Stampede’s rodeo events, and begin with a pass around a specific barrel. From there, the drivers race counter-clockwise and enter the backstretch, which is the farthest area from the infield and the fans watching in the grandstand.

This area is particularly important for drivers, as the straightaway allows them to begin to separate from the pack and generate speed.

After coming through the final turn on the left side of the track, the drivers enter the homestretch and their last chance to gain positioning before the finish line in front of the grandstand.

While the majority of attention is paid to the chuckwagon drivers and their teams of horses, the outriders play a big part in determining who walks home with the Stampede paycheque.

Outriders are members of the driver’s team, tasked at calming down and focusing the horses before the starting horn and breaking camp (more on this later) once the race begins.

During the race, outriders play a big role as they can only be a maximum of 150 feet behind the drivers and count towards the overall time of the chuckwagon.

A late outrider can have huge consequences such as the recent Medicine Hat WPCA races, as Kurt Bensmiller looked to have won the final heat before a late outrider gave Luke Tournier the title.

In 2012, the Stampede made the decision to lower the amount of outriders per team from four to two due to safety concerns at the track.

It’s an aspect of chuckwagon racing that may seem arbitrary, but has deep roots in prairie traditions of old.

Once the starting horn sounds, one of the outriders must pack up barrel representing a stove into the back of the wagon to simulate a cowboy quickly breaking camp.

This must be done with extreme speed and skill, as the team’s horses are already manoeuvring through the barrels before making the first turn on the track.

Original stoves used for chuckwagon racing weighed up to 70 pounds and were made of metal, though they’ve been replaced by rubber versions these days.After successfully loading the camp stove, the outrider must get on his horse and catch up to the chuckwagon.

A hundredth of a second can determine who wins in the @CS_rodeo Barrel Racing event. pic.twitter.com/ripVi0meXu

In a sport where tenths and even hundredths of a second count, penalties can be extremely costly when chasing a championship.

There are numerous penalties for both drivers and outriders, but some of the more common ones include knocking over a barrel, starting before the klaxon (opening horn), failing to load the stove, and late outriders.

These penalties usually add between one and two seconds to a team’s final time, which can bump a driver down the standings quite significantly.

The two mostly costly penalties in terms of time added include knocking over a barrel which adds five seconds, and missing a barrel outright which adds an additional 10 seconds.

Living legend, Kelly Sutherland, is retiring from chuckwagon racing in 2017 after a historic career at the Stampede. https://t.co/KsCdlcnIK6 pic.twitter.com/u7v1KH0dG1

Thirty-six drivers begin the 10 days of racing, but only one can call themselves a Calgary Stampede champion.

Over the first eight days of competition the drivers’ times are combined into an aggregate time, with the top eight racers qualifying for ‘Semi-Final Saturday.’

From there the top four will qualify for the ‘Dash for Cash’ on Sunday, which is a sudden-death final heat to award the Rangleland Derby championship.

The winner of the Rangeland Derby will be awarded a purse of $150,000, while the fastest driver each day winning $6,000.Last year, Grande Prairie’s Kirk Sutherland took home the Stampede title, while his brother Kelly ‘The King” Sutherland is the winningest driver in Stampede history with 12 titles, and will be competing in his final Rangeland Derby this year.

The 2017 Rangeland Derby runs every night at the Stampede Grounds starting with the opening heats on July 7 and wrapping up with the Dash for Cash on July 16.