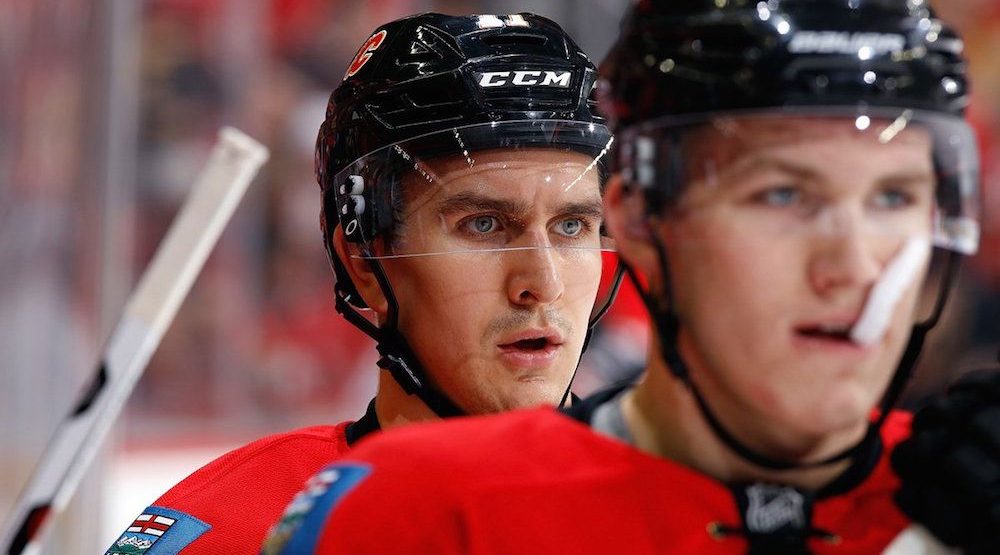 It takes a special three players to earn a forward line a nickname, especially in today’s NHL.

The Triple Crown Line, the Legion of Doom, and the Production Line have etched themselves into hockey lore, with more recent entries like Tampa Bay’s Triplets Line and Los Angeles’ That 70’s Line making their names known over the last few years.

But, another trio has burst onto the scene with plenty of Calgary Flames fans as surprised as the rest of the league.

Playing together for most of the year, the line of Mikael Backlund, Michael Frolik, and Matthew Tkachuk has been the go-to grouping for providing an offensive spark for a Flames team that already boasts the names of Gaudreau and Monahan.

While hockey players and media aren’t always the most creative bunch, the newly christened ‘3M Line’ has more to do with the adhesive company than just sharing the same first initial.

All three have proven to be durable, show flexibility, and most importantly stick together in high pressure situations.

For as well as the 3M Line has been playing over the last few weeks, it’s impressive to note that the trio of Backlund, Frolik, and Tkachuk have only been playing together for a short amount of time.

Tkachuk is obviously the newbie on the team with just 43 NHL games under his belt, but many forget that Frolik is only in his second season in Calgary.

Despite their short time together as teammates, their line has emerged as Calgary’s top line statistically and have also been able to serve as a quality shutdown trio as well.

Historically since 2007-08, the 3M line is holding up next to probably the best Flames line assembled in decades (Huselius-Langkow-Iginla) pic.twitter.com/XpuQj1u7lT

Heading into Thursday’s game against the Nashville Predators, the forwards are all ranked in the Flames top five point scorers, with Backlund topping the squad with 32 points in 47 games.

This has been a renaissance campaign for the 27-year-old centre, as he is on pace to shatter his career-highs in goals, assists, and power play points. Consider this, if the season ended today Backlund would have already amassed his third-best year for points since joining the NHL in 2009.

“I just want to win,” Backlund stated. “I’m here to go to playoffs, [it’s been] too many years here that we’ve missed playoffs so it’s a main goal this year. I’m happy to get the team there by producing, but I’d rather have 10 points and a playoff spot than 60 points and no playoff spot.”

Building his career as a defensive-first centre, Backlund’s offensive output in 2016-17 even sparked a mini-campaign to bring the Swede to the All-Star Game before Johnny Gaudreau was selected on the Flames behalf.

Still, Backlund has taken the most faceoffs of any Calgary centre and is not only being used to shut down the NHL’s top offensive weapons, but is finding the back of the net at a good clip himself.

Although his play has taken a step back from the scorching pace displayed in November, Frolik has also been pulling his weight lately for the Flames.

Like Backlund, Frolik has the potential to set career-highs in a number of statistical categories with 27 points in 47 games. As a comparison, Frolik’s previous best came during his rookie season back in 2008-09 when he scored 45 points with the Florida Panthers.

The Czech national has done a great job of taking Tkachuk under his wing and showing him how to be an effective two-way winger in the NHL.

Just behind Tkachuk, Frolik currently holds the best Corsi percentage on the team at 55.42% which shows his ability to expertly possess the puck and find proper shooting lanes.

An underrated part of Frolik’s game is also his shorthanded acumen, as he ranks second on Calgary for minutes on the penalty kill with over 123 minutes accrued so far. He is also tied for the Flames lead with a pair of shorthanded markers on the season.

Though he isn’t as flashy as Tkachuk or putting up the points that Backlund has, Frolik quietly is carving out one of the best seasons of his almost decade-long NHL career.

And that brings us to the rookie Tkachuk, who has surpassed most expectations through his first season of professional hockey.

"They can play both (sides of the puck), that's something they're teaching me." – Matthew Tkachuk on his linemates pic.twitter.com/XS41GCNvif

Sitting tied for fourth in rookie scoring, the power forward from St. Louis, Missouri has been able to establish a physical presence while making an impact on the scoresheet.

Tkachuk has posted historic Corsi numbers for a rookie forward since the stat started being officially collected during the 2007-08 season. For forwards who have played at least 20 games this season, Tkachuk is the top ranked rookie and is eighth overall in the entire NHL.

While he still takes the occasional undisciplined penalty, the rookie has done a solid job of drawing his opposition into heading to the sin bin himself.

Scoring 14 points over his last 14 games, Tkachuk is heating up at exactly the right time thanks to both the on and off-ice support he’s received from his line mates.

While many of the Flames have been able to enjoy some strong performances over the last few weeks, the 3M Line has even drawn the attention of Flames bench boss Glen Gulutzan.

“Once again, they do everything right,” Gulutzan said. “Most nights they’re playing exactly the way we want to play and they’re getting rewarded for it. But, they’re three good players that have a little chemistry as well.”

It’s been an exceptional first half of the year for the 3M Line, and we’ll see what kind of encore they’ll deliver for the stretch drive of the season.