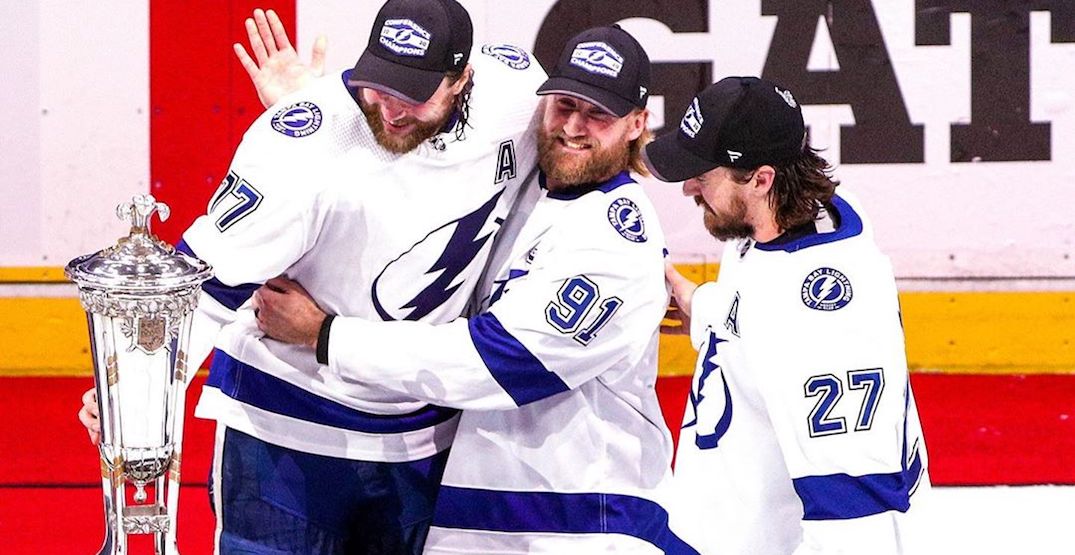 The 2020 Stanley Cup Final is set, with the Tampa Bay Lightning set to face off against the Dallas Stars on Saturday night.

Whoever wins the series will hoist the Stanley Cup, pass it around, and parade it around the ice. It’s a wonderful tradition, and the best trophy presentation in all of sports.

The NHL also hands out trophies for the Eastern and Western Conference champions, though that trophy presentation is often less than glamorous.

Tampa Bay was presented with the Prince of Wales Trophy on Thursday for winning the Eastern Conference. The players touched the trophy and picked it up, which is notable, because a bizarre tradition has gained traction over the past two decades.

The Stars chose to participate in this nonsensical tradition when they punched their ticket to the Stanley Cup Final on Monday. Dallas captain Jamie Benn posed with Clarence Campbell Bowl, but did not touch it — in fact he didn’t even look happy to have to stand near it.

The theory behind not touching the conference championship trophies is clear. Players compete to win the Stanley Cup, so any other trophy presented to them doesn’t deserve to be recognized.

The problem with that is it makes no sense. Making it to the Stanley Cup Final is a big deal and players have acknowledged that fact. They wear Conference champions hats for crying out loud.

Some non-touching teams have taken group photos with the trophy, which begs the question: if the trophy doesn’t deserve to be celebrated or recognized, why are you celebrating and recognizing it? Just touch it!

And yet 22 of the last 30 times a conference trophy has been presented, the team that won it chose not to touch it.

What’s most bizarre about the tradition is that it hasn’t been very successful. Touching the trophy doesn’t jinx anyone. In fact, if there’s a jinx of any kind, you can argue it’s for the non-touchers.

Eric Lindros was the first not to touch the Prince of Wales Trophy in 1997 when the Philadelphia Flyers went to the Final. His team was promptly swept by the Detroit Red Wings, whose captain Steve Yzerman touched the Clarence Campbell Bowl.

You’d think that would put a stop to the madness, but in 1999 Buffalo Sabres captain Mike Peca didn’t touch the Wales Trophy. They ended up losing to the Dallas Stars, who did lay their hands on the Clarence Campbell Bowl.

Teams touched their respective conference trophies until 2003 when Paul Kariya didn’t touch it on behalf of the Anaheim Ducks, who lost to trophy-touching Scott Stevens and the New Jersey Devils.

Trophy snubbing became much more fashionable after that.

Since 2005, only one Western Conference team has touched the Campbell Bowl, the Vegas Golden Knights, who lost in the Cup Final. The Eastern Conference has been more split, with seven teams touching the Wales Trophy and eight teams keeping their hands to themselves.

Trophy-touchers have been successful 58% of the time since 1997 (11 wins, 8 losses), while trophy-snubbers only have a 44% success rate (11 wins, 14 losses). But a trophy-snubbing team has only beaten a trophy-toucher twice, in 2004 when Tampa Bay beat Calgary and in 2018 when Washington beat Vegas.

Perhaps if the trophy-touching Lightning beat the snubbing Stars this year, this ridiculous no-fun tradition will be gone forever. One can only hope.