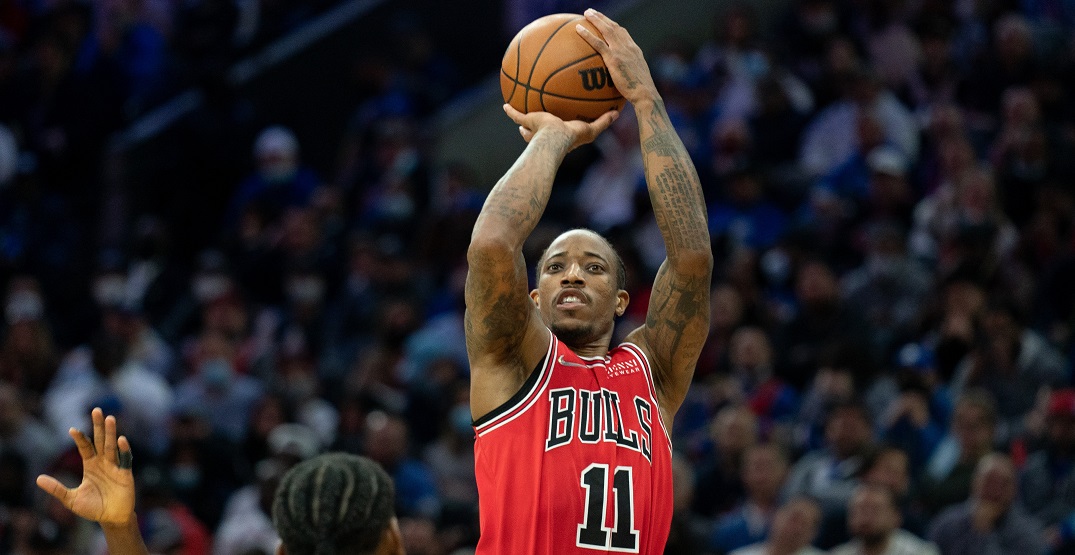 To say DeMar DeRozan has been fitting in nicely in his first year with the Chicago Bulls would be an understatement.

The Toronto Raptors’ all-time leader in both games played and points scored, the 32-year-old shooting guard seems to have found his mojo after a few rocky seasons.

At 10-5, the Bulls sit third in the Eastern Conference, with DeRozan leading his new team in scoring.

DeRozan’s exit from the Raptors as the centrepiece of the trade to San Antonio for Kawhi Leonard back in July 2018 wasn’t exactly pretty, but it was a savvy piece of business for Toronto.

DeRozan was a four-time all-star in Toronto and took the Raptors to the Eastern Conference Final back in 2016, and it was an extremely common opinion that the trade was disrespectful to DeRozan because of how out of the blue it was. DeRozan said this summer that he’d been told two days earlier the Raptors were planning on keeping him, before getting the phone call that he was shipped to the Spurs.

And yet, even if Leonard was just a Raptor for a lone year, it’s hard to imagine the trade working out better for Toronto, with the team winning the NBA title in 2019 with Leonard as the NBA MVP.

DeRozan, on the other hand, has had his ups and downs since.

DeRozan and the Spurs did finish seventh in the Western Conference in 2018-19, the first year following the trade, but fell in the first round to the Denver Nuggets in seven games.

The Spurs missed the playoffs in each of the past two seasons, including falling in the play-in game last season to the Memphis Grizzlies.

All things considered, it’s not too surprising why the four-time all-star was looking for a fresh start once again when he signed a three-year, $85 million contract with Chicago as part of a sign-and-trade deal this summer.

And make no mistake, DeRozan’s heard all the critics.

“People [have been] saying I was washed for the last few years,” he told reporters earlier this week. “[There’s] the narrative [that I] ‘won’t fit’ [with Chicago and San Antonio]. I can find all types of chips that I use as my motivation. I just want to be a winner and enjoy this ride.”

In his time with Chicago, DeRozan had a much more active shooting role than in any of his years with the Spurs. He’s currently averaging 18.8 field goal attempts per game, his second-highest total of his career, behind only the 2016-17 season with Toronto.

One of the biggest knocks on DeRozan’s game has always been his chronically poor shot selection. But it’s not like DeRozan has been wasting his shots in Chicago, as he’s got the second-best effective-field goal percentage of his career at .525.

DeRozan’s fifth in the league with 26.6 points per game, while teammate Zach LaVine is just behind him at 26.5.

Scoring isn’t everything, but it’s easy to see why a team with two top-10 scorers currently sits third in the Eastern Conference. His points-per-game mark is also the second-highest mark of DeRozan’s career.

And it’s also a pretty good way to tell who’s bound for the All-Star Game, as all 10 of the NBA’s leading scorers from last season ended up being voted to last year’s contest in Atlanta.

DeRozan has been key in the Bulls’ transformation

The Bulls’ front office has been active in attempting to return their team to the glory days of the 1990s. Sure, DeRozan might not be a Michael Jordan–level talent, but it’s also a roster that’s won just five playoff rounds since Jordan left in 1998.

They’ve missed the playoffs in five of the past six years, but look poised to be among the contenders in the east this year.

In short, it’s no surprise why management has been overhauling the team’s roster.

Of their five most frequently used players, four are in their first or second season with the team. Beyond DeRozan, they’ve acquired Nikola Vucevic, a two-time all-star who made his way to Chicago last season as the team’s starting centre.

Playing at point guard for Chicago is Lonzo Ball, the second pick in the 2017 draft, and he is already on his third NBA team. But like DeRozan, the fresh start for Ball seems to have jumpstarted his game.

They’ve also added Alex Caruso, a key veteran who averaged 24.3 minutes a night for the 2020 champion LA Lakers during their playoff run.

It is early for the new-look Bulls, but it is working. And for Raptors fans who felt slighted that DeRozan didn’t get his fair shake in the trade, it should make them more than happy to see him thriving in Chicago.