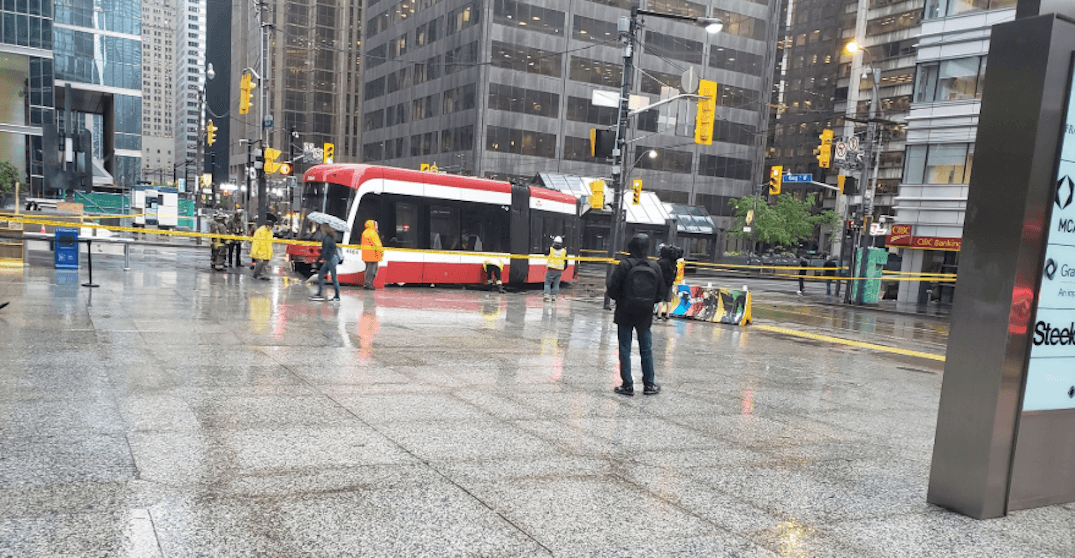 Update: As of 9:20 am, Toronto Police say that all injuries following the streetcar derailment were minor. They also say the derailment will require heavy equipment to fix, and the intersection is expected to be closed for up to 5 hours.

A TTC streetcar has derailed during this morning’s rush hour.

According to Toronto Police, they are are investigating after an SUV and streetcar crashed, causing it to derail at King Street West and University Avenue.

The intersection is fully closed at this time.

The TTC’s Stuart Green calls this “a significant derailment,” and said there is no ETA on when this will be cleared.

This is a significant derailment. Advise to plan accordingly. No ETA to clear at this moment, more info to follow… @TTCnotices will have the latest. https://t.co/3dNO2bmexL

The 504 King streetcar route now has shuttle buses running, with detours through the downtown core to avoid the intersection.

The TTC says no major injuries have been reported at this time.

Update: 504 King Shuttle Buses: Detour eastbound via John, Adelaide, Bay and westbound via York, Richmond, John, Bathurst due to a collision at King and University.

Streetcar derailed at King and University. SUV has a Lyft sticker in windshield. #ttc pic.twitter.com/TiISIsp3uI