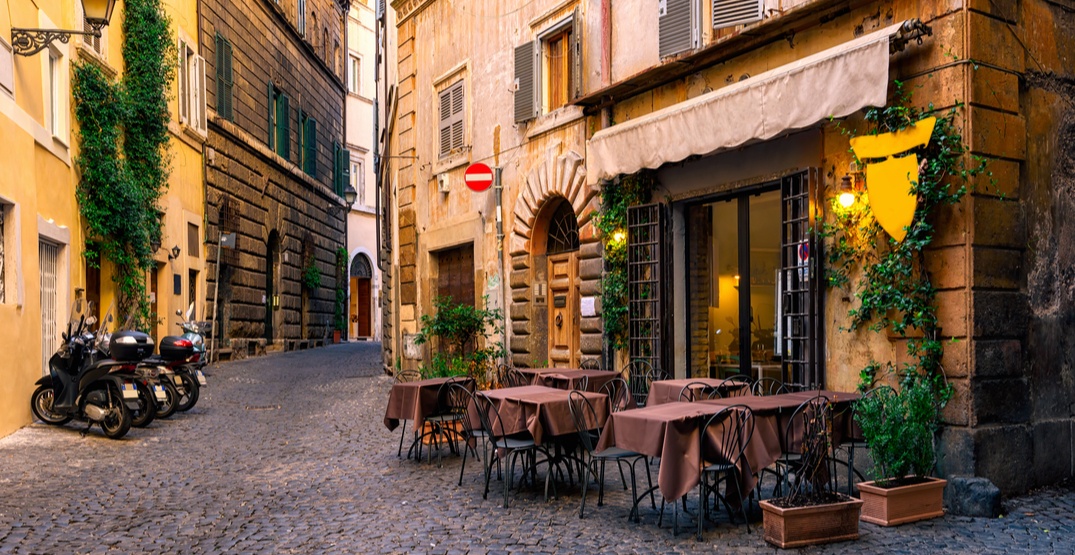 Rome is one of the longest occupied sites in Europe, dating back 2,800 years, all the way to  753 BCE. As you wander the streets of this metropolitan Italian city, you will find centuries of history on every corner. Part of Rome’s charm lies in its juxtaposition of the antiquity of The Colosseum in the historic centre to the rationalist architecture of the Colosseo Quadratic in modern areas.

Today, Rome is made up of a number of concentric neighbourhoods surrounding Termini Station (the central train station in Rome). The extensive metro system makes travelling from one area to the next easy and affordable, and helps offset how pricey accommodation can be within the main areas of the city.

Whether you opt for a lavish hotel by the Spanish Steps or a quaint Airbnb with a terrace, here is our neighbourhood guide to the trendiest spots in Rome. 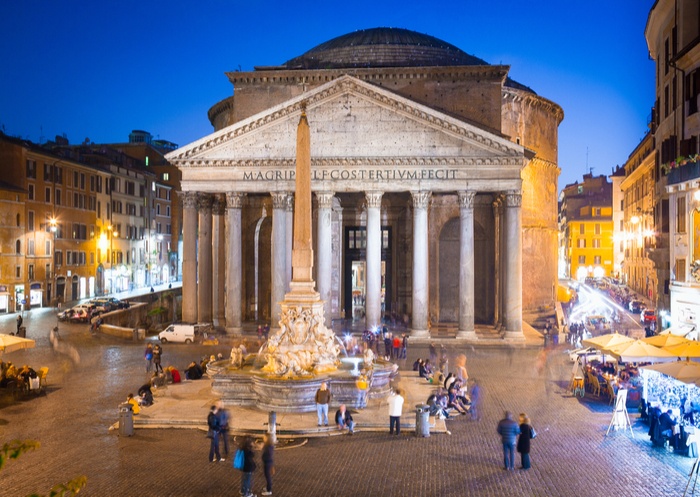 Colonna is the central point in the city and is often one of the first areas visitors plan to see in Rome. Named after the tall Column of Marcus Aurelius, other historic sites to visit in the area include the Pantheon, Hadrians Temple in Piazza di Pieta, Fondazione Roma Museo and Palazzo Doria Pamphilj. 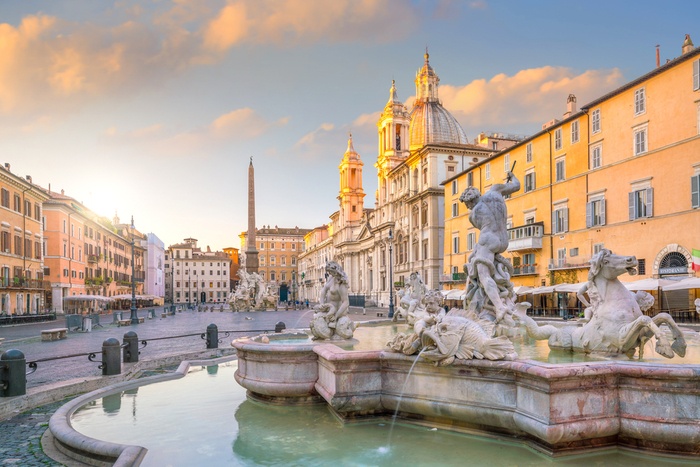 Centro is in the heart of  Rome and has remained the center of commerce in this city since the early Renaissance. Today, Centro is filled with cafes, galleries and shopping surrounding the monuments.

Piazza Navona in Centro is one of the prettiest squares in the city to enjoy the sunshine on a patio. For those looking for a bite to eat or a drink, Camp de Fiori stays vibrant all day and night with people filling the square to celebrate from the afternoon to the early hours of the morning. 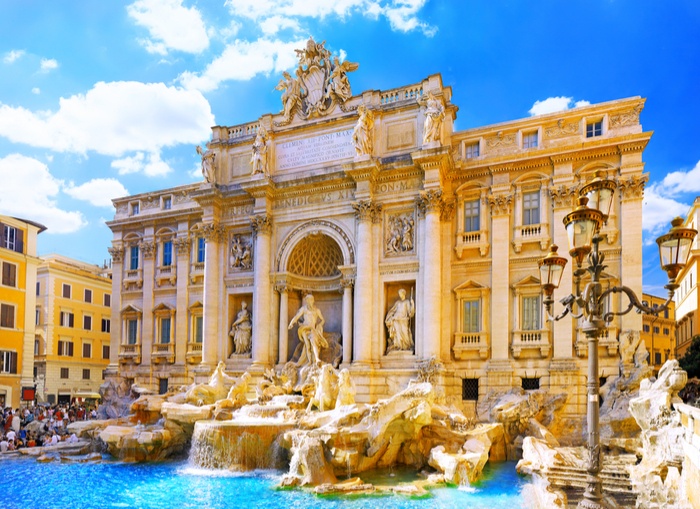 People flock from all over Italy and the world to the Trevi Fountain to make a wish. But, there is so much more to explore in Trevi including the Palazzo del Quirinale and Palazzo Barberini. The main streets of Via del Tritone, Via del Corso and Via Nazionale are filled with shops and hotels making this a popular spot for visitors to stay in the city. 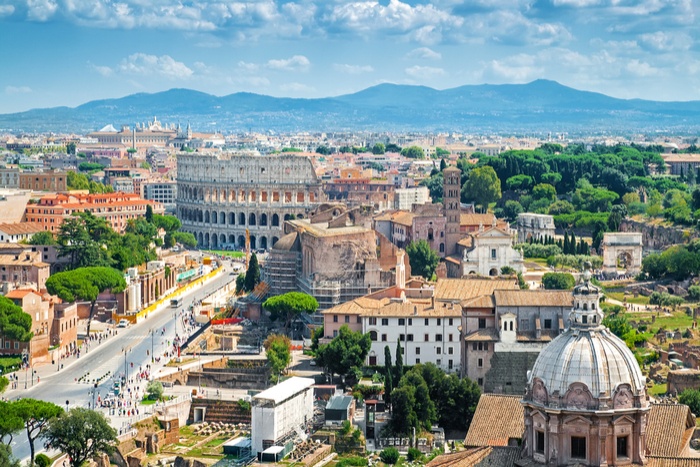 Monti is the oldest area of Rome and home to one of the city’s most iconic landmarks: The Colosseum. Today, Monti is known for being a space for creatives in the city with a ton of quirky locally owned shops, restaurants and wine bars lining the street.

For contemporary Italian fashion, look no further than the Via del Boschetto where alternative Italian designers are opening their own stores. For a unique view of the city, take the time to look around as you climb up to the Piazza del Grillo.

On the weekend, you’ll find the locals hanging out by the Piazza della Madonna dei Monti or visiting the Mercato Monti. 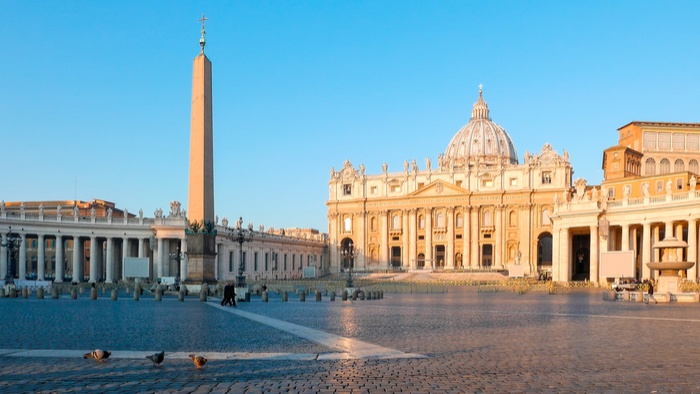 Next to Vatican City, Aurelio is a residential neighbourhood that young families and professionals call home. Aurelio is a perfect location for visitors hoping to be only a short walk from St. Peter’s Square, The Vatican Museum and The Sistine Chapel in Vatican City.

Because Aurelio is not itself a hot spot for tourists, the accommodations in this area are often more affordable than in the center of the city and only 15 minutes on public transit to Termini Station. 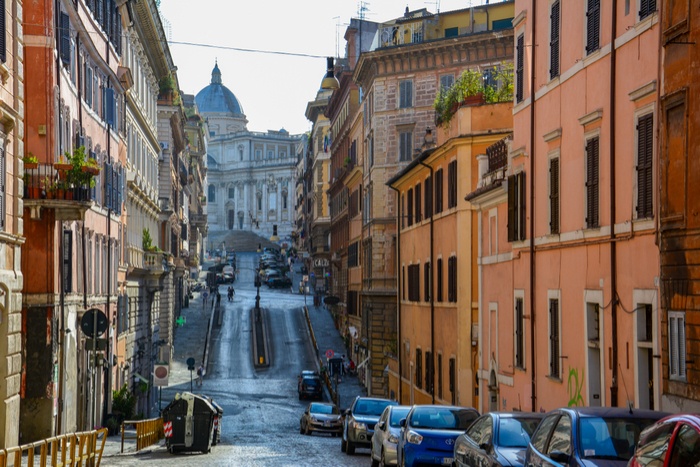 Esquilino is a central neighbourhood in Rome surrounded by Monti, Castro Pretoria, San Lorenzo and others.  This is also the neighbourhood where Termini Station is located, acting as a central point for exploring more of Rome or Italy.

For sightseeing, Piazza della Repubblica in Esquilino is one of the main draws in the city, embodying the grandeur of Rome in a stunning semi-circular piazza. 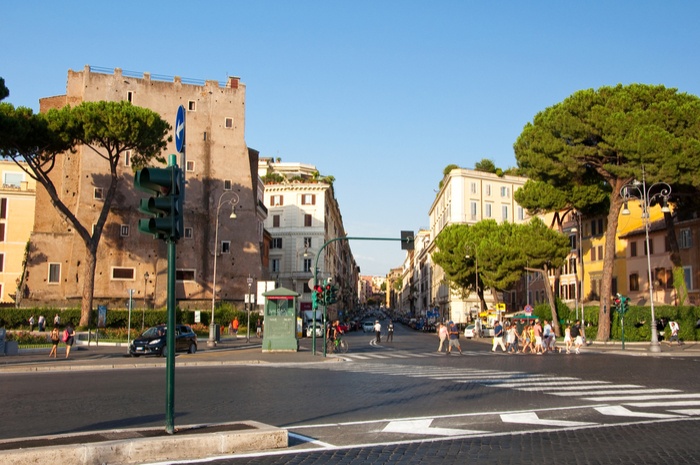 Castro Pretoria is buzzing with tourists during the day flocking to visit the National Library, Porta Pia and Teatro dell’Opera, Terme di Diocleziano complex and the Basilica of Santa Maria degli Angeli e dei Matriri based on a design by Michaelangelo.

Castro Pretorio was the location of an ancient army camp during the first century for the Praetorian Guard. Today, this old area has been revived and is filled with modern apartments, locally owned business and plenty of hostels, hotels and B&Bs to choose from. 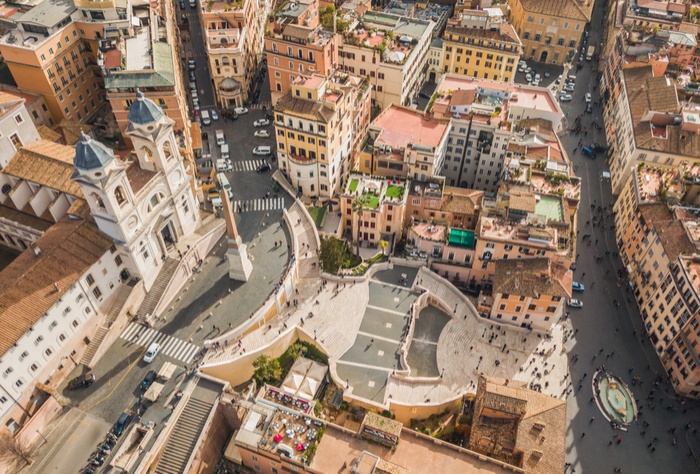 The Spanish Steps in Rome are of one the best spots to take a seat and watch the busy streets move around you. The Piazza del Popolo is easily accessible by metro (the closest stop is Spagna) and within walking distance from other popular attractions.

Campo Marzio is also known having some of the best shopping in the city around Via Del Corso and Via Condotti where the upscale shops and designers are located. 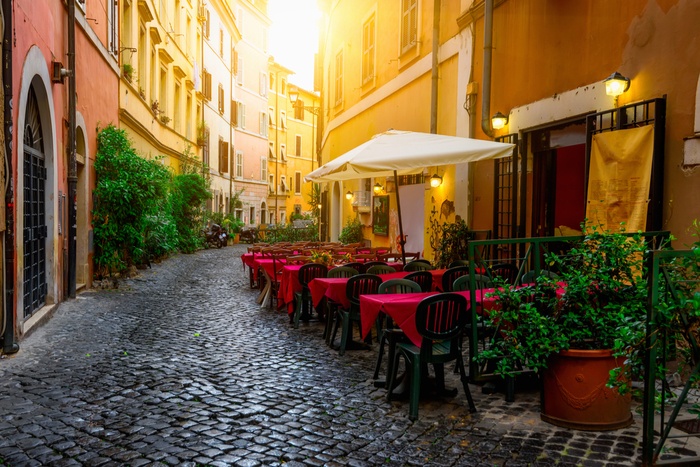 On the west side of the Tiber river, Trastevere is one of the chicest and most charming neighbourhoods in Rome. During the day, wander through the quiet side streets along terracotta-coloured buildings and historic churches.

Piazza Santa Maria comes alive at night where you can bar hop enjoying an apertivo with the locals after work, to dinner and then out for the evening all within this one area.

While this area is perfect for an evening out, there are no metro stops in Trastevere so account for the walk time or extra taxi money. 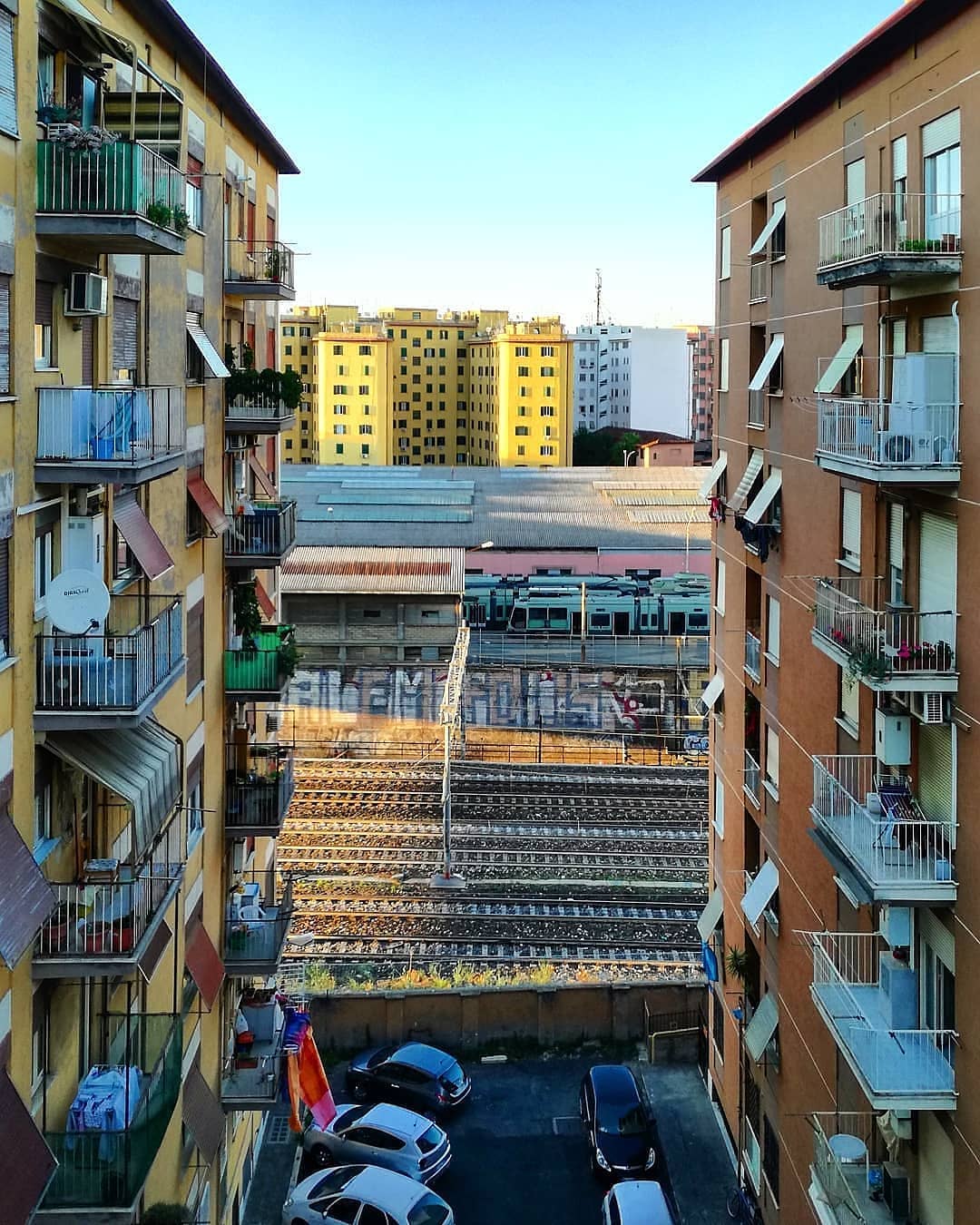 Often to compared to other alternative areas like Shoreditch in London, or Brooklyn in New York City, Pigneto is a youthful area frequently missed during city tours. This is because, even though Pigneto is only 15 minutes from Termini, the neighbourhood is filled with smaller mismatching 20th-century buildings giving this area a different charm than the historic Renaissance piazzas.

Pigneto draw is the street art and bars with local music on Via del Pigneto. If you are a lover of cinema, Pigneto has a few independent theatres that play a range of Italian and international films with subtitles in Italian. 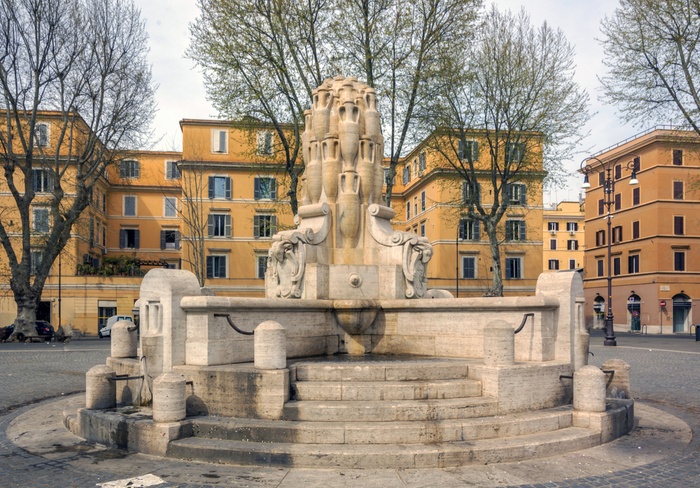 For those of you in search of a laidback, local vibe, Testaccio and Aventino are great spots to book an Airbnb. This area is brimming with creativity transforming an old slaughterhouse into the MACRO (contemporary art museum) and the Città dell’ Altra Economia dedicated to hosting markets, events and exhibitions.

One of the coolest spots to snap a photo is at Monte Testaccio, an artificial mountain made up of fragments of broken ancient Roman pottery dating from the time of the Roman Empire. 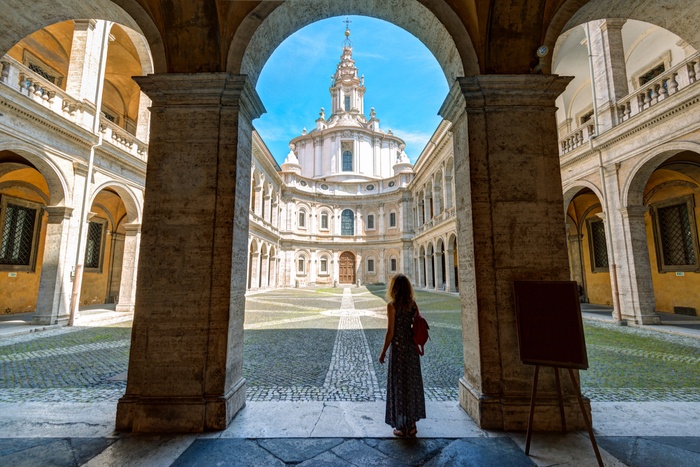 San Lorenzo is the student district of Rome and still remains one of the more affordable areas of the city. Located just north of Termini, San Lorenzo filled with the students from Sapienza University. This area is the perfect spot for the backpacker looking for cheap pizza, late night drinks and chill clubs around the Via dei Volsci and Via dei Sabelli areas.

While there isn’t a ton of “tourist attractions” to visit in San Lorenzo, the cemetery Monumentale Verano is one of Rome’s largest and is filled with beautiful sculptures and the church, Basilica al Verano, is one of the city’s seven pilgrimage churches in Rome.

Show us your favourite neighbourhoods of the world by using the hashtag #dailyhivemapped.