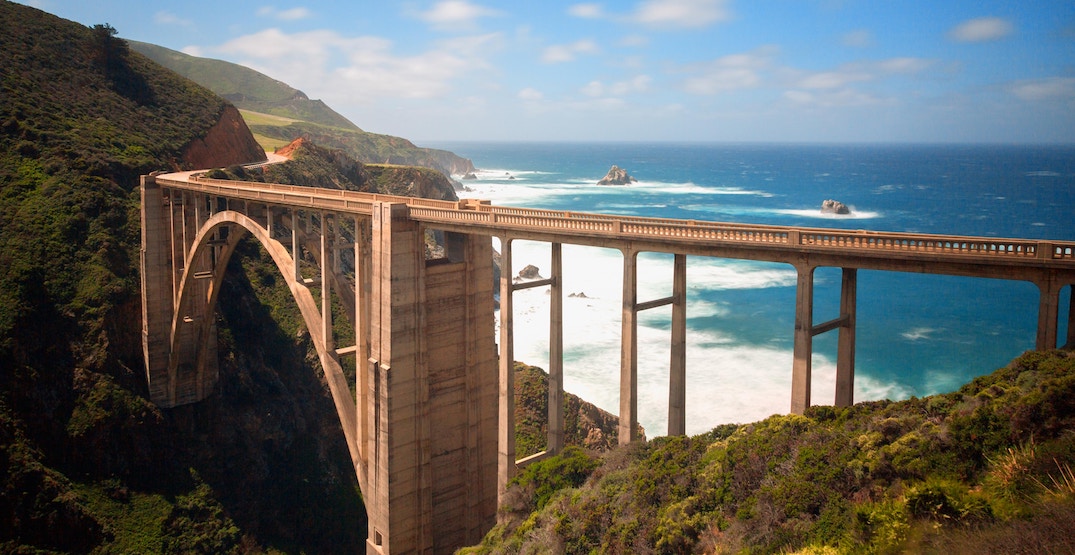 Spanning over 900 km along California’s rugged coastline, the Pacific Coast Highway (PCH) is one of the most unbelievably scenic roads in the world.

Built in the 1930s and starting just south of the California-Oregon border, the iconic state route snakes along the coast through rolling mountains and past bohemian beach towns, coming to an end in San Diego.

Meant to be travelled slowly while taking in the stunning scenery, the PCH takes roughly 10 hours to complete at a leisurely pace with no stops — but what would be the fun in that?!

We recommend spending a few days, a week, or even longer to meander the scenic route and take in the sights. To kick off your road trip, we’ve compiled a list of 11 stunning stops you don’t want to miss.

Start off your PCH road trip in San Francisco at the city’s iconic landmark, the Golden Gate Bridge. One of the best ways to take it in is by bicycle, so rent a pair of wheels for a quick jaunt to Sausalito and back.

From there, take a short drive south to Golden Gate Park — 1,000+ acres of grounds that include two world-class museums, a herd of buffalo (seriously), a windmill, Japanese tea garden and much more.

There’s so much to do in San Fran, so be sure to check out our first timer’s guide to the city before hitting the road.

In the winter, waves routinely measure from 25 feet to sixty feet, making it a popular destination for the world’s best big wave surfers.

Continue south and you’ll soon find yourself in Santa Cruz, a surfer-centric town with an old-school Americana vibe. Take a stroll along the Santa Cruz Boardwalk, home to California’s oldest surviving amusement park and an epic arcade.

Once you’ve had your fill of arcade games, head to Cowell Beach for surfing lessons on the perfect beginner wave, complete with views of the pier jutting out into the Santa Cruz Harbor.

Big Sur is a rugged stretch of coastline between the towns of Carmel and San Simeon known for its narrow, winding turns, seaside cliffs, and dramatic views. The route has numerous state parks for camping, hiking, and beachcombing, plus tons of lookout points to pull over and snap photos to your heart’s content.

Be sure to stop off at McWay Falls, an 80-foot-tall waterfall that flows directly into the ocean, and Bixby Creek Bridge, a graceful bridge with sweeping concrete arches offering a breathtaking vista of the often-misty coastline.

Looking for somewhere to stay? Check out Post Ranch Inn, which boasts a clifftop infinity pool 1,200 feet above the Pacific Ocean.

For a taste of Europe, head slightly inland to Solvang, a quaint Danish village established by pioneers in the early 1900s.

Stroll through the town center and take in the traditional Danish architecture, windmills, wine bars, and shops. With a bakery on nearly every corner, there’s no shortage of delightful desserts to take with you on the road.

Promoted as the “American Riveria,” Santa Barbara is the perfect blend of beach and glitz, lying between the steep Santa Ynez Mountains and the Pacific Ocean. With red-tile clay roofs, white stucco walls and adobe homes, nods to the city’s Spanish colonial history are plentiful.

Travel back in time to Santa Barbara’s earliest days with a trip to the historic Old Mission Santa Barbara, then head to State Street for cute shops, top-rated restaurants, and sidewalk cafes galore.

If you visit between late October and February, head to the Monarch Butterfly Grove where you’ll catch thousands of monarch butteries escaping winter amidst a eucalyptus tree-filled grove.

Pismo Beach’s hidden gem, Oceano Campground, is one of the few places in California you can camp directly on the beach with a 4×4 vehicle. Opt to stay for the night and let the sound of the waves lull you to sleep.

Nicknamed the ‘Bu by surfers and locals, Malibu is the gateway to LA and the heart of SoCal surf culture, known for its celebrity homes and iconic beaches.

Stop at the Malibu Pier and grab lunch at Malibu Farm Cafe, situated at the very end with epic views of the ocean.

What would a California road trip be without a stop in Santa Monica?

Stroll Third Street Promenade to get your shopping fix, then head to the Bungalow at sunset for cocktails and ping pong at the beach-bar-style lounge.

Post-beverage, stroll down to the Santa Monica Pier for a ride on the world’s only solar-powered Ferris wheel.

Encinitas continues to attract surfers and hippies since being home to Paramahansa Yogananda in the 1930s, a famous Indian yogi and guru credited with introducing millions of westerners to the teachings of meditation and yoga.

The Self-Realization Fellowship, where Swami Yogananda took up residence, is a serene locale featuring meditation gardens, koi ponds, and a temple. Be sure to take in the beautiful views from the grounds overlooking Swami’s beach, a popular local surf break.

For lunch, head to Swami’s — are you sensing a theme here? — a longtime local favourite.

Continue through Encinitas on the 101, and you’ll soon find yourself in San Diego. Military outpost, surf mecca and home to the world-famous zoo, the city has no shortage of things to do to wrap up your California road trip.

Rooftop bars with an ocean view more of your thing? Pacific Beach, where Garnet Avenue is always buzzing with activity, is for you. For an epic panoramic vista of San Diego County, make your way to Mt. Soledad National Veterans Monument — trust us, the view is unbeatable.

Heading on a California road trip? Don’t forget to tag @dailyhivemapped in your travel photos for a chance to be featured!