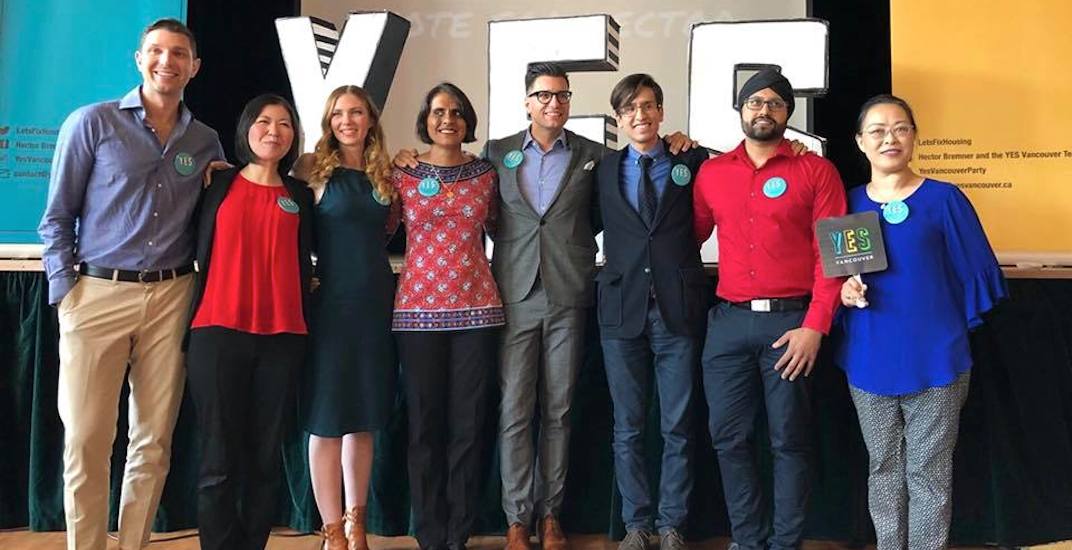 Saying the party was going to “bring people together” and “not play politics with the big issues of the day,” Hector Bremner, who is running for mayor with his newly formed YES Vancouver party, announced his party’s candidates for this year’s upcoming municipal election.

Here’s who will be on the ballot for YES Vancouver:

YES Vancouver said Bains, who owns three Cobs bread franchises in Vancouver “became increasingly frustrated with city government, and is concerned about our ability to retain and sustain small businesses with an ever-increasing tax burden being placed on them.” Because she employs over 50 people, she “understands what it is like to meet a payroll when governments continue to download costs and expectations on businesses,” they added.

Described by YES Vancouver as a “longstanding leader within the Chinatown community,” the party noted that Chan has volunteered for numerous charities including Canadian Cancer Society, Vancouver Guangzhou Friendship Society, BC & Guangdong Business Council, and the Chin Wing Chun Tong Society of Canada. She was also nominated for Entrepreneur of the Year by Ernst and Young and guest hosts a radio show on CHMB.

Describing her as a lifelong Vancouver resident, an entrepreneur (she launched the clothing company Devil May Wear) and an influencer, YES Vancouver said Ostler is “enthusiastic to create more opportunities for Vancouverites that can spill over and change the world.” The party added she is passionate about “utilizing the skills of under-employed populations to give everyone a chance to contribute meaningfully as well as to educate young people about entrepreneurship.”

Tang was born and raised in Vancouver, and pursued graduate studies in Ethnomusicology. Currently, she is a private piano and music theory teacher and a Researcher for UBC’s Access & Diversity Department, specializing in working with faculty, staff, and students with special needs. She is fluent in English, Cantonese, and Mandarin and has a working knowledge of French. YES Vancouver said Tang’s main campaign focus is to “promote Vancouver as a key international music, arts, and cultural hub and to support our local cultural communities.”

Describing him as a hardworking, organized and motivated person with a passion for politics, human rights and equality, YES Vancouver said Virdi – an SFU graduate – worked as a pharmacist for the last 6 years and has recently ventured out and opened his own pharmacy with a medical clinic. “He is particularly passionate about preventing antibiotic resistance and tackling the multifaceted problem of opioid addiction.”

Describing him as an “educator with a passion for new ideas,” YES Vancouver said Prieto – who was born in Colombia and grew up in Vancouver – holds an MSc. in mathematics from Oxford University and pursued education policy as a member of the Governing Council of the University of Toronto. “He loves the diversity of Vancouver, and believes in its potential for excellent public education in a competitive world.” Prieto also ran for school board in the 2017 byelection.

Heba grew up in Metro Vancouver and is a Program Assistant at SFU’s Centre for Online and Distance Education.  YES Vancouver said that as a new dog owner, one of Heba’s priorities will be to foster and create a more dog-friendly environment in Vancouver. Overall, though, “Leo strives to be an advocate for improvement, sustainability and accessibility to parks and rec programs for all communities and families in Vancouver.”

Bremner formed the YES Vancouver party following the rejection of his mayoral candidacy bid with the NPA.