Thousands of people downtown were certainly depressed after the third goal in Game 7, but even the most disappointing loss of the playoffs couldn’t have triggered the latest riot. Wednesday night was certainly a planned event by anyone but hockey fans.

Let’s face it. By 9pm, the real hockey fans had gone home. The only ones left rioting were beyond bandwagoners.

This morning everyone feels embarrassed. The city is asking itself, “how could this have happened!?” But the entire show should be of little surprise to everyone. The consequence is not going to be entirely on the city, but instead to the fans themselves. We all must accept that the city has grown tremendously in the last 125 years, and especially in the last seventeen years. Many major cities in the “first world” have riots, and many are sports-fueled. We were naïve to think that we could avoid the 2011 Riot. Let’s understand a little more about the event. 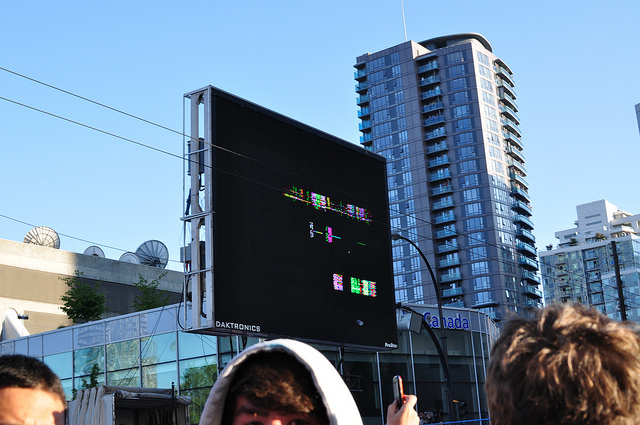 First, we must accept that Wednesday’s riot was certainly planned. Not with a blueprint or an organized group, but all of the elements were pieced together to set the stage. We had an excuse for 100,000 fans to gather in the same place. Transit allowed thousands of people to come from the suburbs, and people had already thought ahead to bring liquor and purchase early in the day. There are unconfirmed reports that people brought signs saying “Riot 2011!”. (Update: signs are seen here) When you look around at the damage and the fires set, we know these people aren’t the same fun-loving people who partied in the streets in the Olympics and the rest of the playoffs. A mentally-prepared group came for rioting tonight. 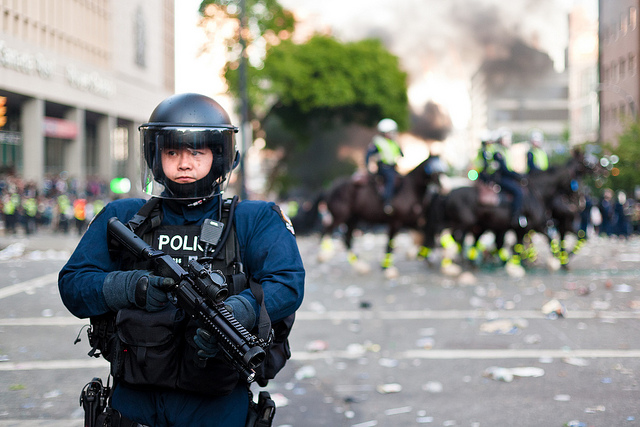 Second, we must realize that the riot was not started by Vancouverites. The riot is indeed the responsibility of a “small” group. I was at the Bay when the first window broke, and the majority of the people that I saw stirring up trouble was not diverse Vancouverites but young kids. Maybe a few were in their mid-twenties, but there’s very little evidence to say that the grown men and women of Vancouver started everything. I recognized faces on the Skytrain on the way home going east. 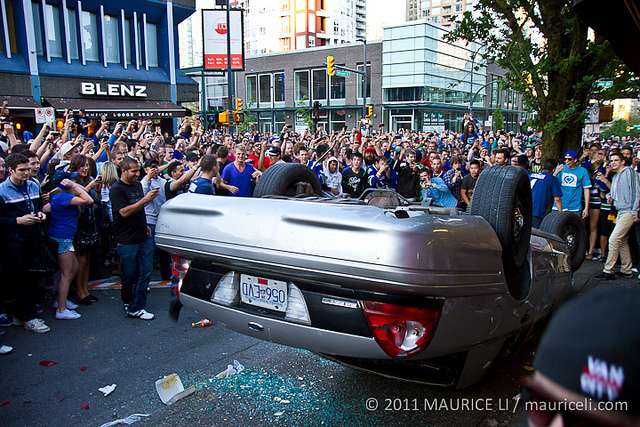 Third, our curiosity gave an audience to their entertainment. The thousands of people strolling downtown put a safety blanket around the “hooligans”. With too many people to control, the police could not target individuals. This provided lawlessness to those who enjoyed chaos and prevented cops from intervening. Deep down all of us wanted to feel like we are a part of history, and our downtown spectating protected the hooligans. We can’t be held at fault for being curious, but we contributed nonetheless. The press also fueled the riot indirectly, as many are empowered by having their “work” seen by TV viewers. 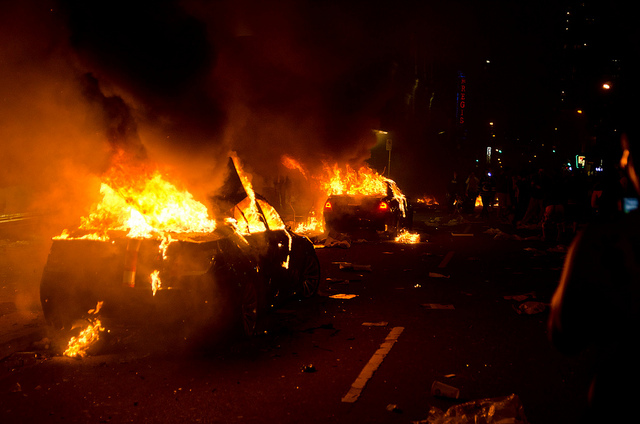 Fourth and most importantly, this riot happened because we were dying to be a part of history one way or another. But sadly it’s failed. Both spectators and hooligans must realize that their participation has confused the rest of the world. Everyone has looked in awe for the last two years of the peace of our large street parties. But now we are going to have to work hard to rebuild this reputation. The best start is everyone’s involvement in the clean up, that is participation rarely seen in post-riot cities.

I experienced my own disbelief while channel surfing after the game. Watching the game from a friend’s condo in Yaletown we saw outside smoke begin to rise from the library. So naturally our group began to flip channels to see the news. Our first look on TV was an orange-smoked view of police controlling crazy people from a GlobalTV feed. We thought they were covering a foreign conflict, so naturally we changed channels in disbelief. We didn’t realize that image is what broke out seconds after the game ended. We decided to walk down Granville to confirm the images, and amazingly it was real. The scene wasn’t a fun street party but a bunch of goons. We didn’t stay long.

There is going to be a backlash. A new Tumblr blog is soaring in views as people are racing to expose those who fueled the riot. There is also an online summary of those who have been identified in photos and video as those making the most damage and assaulting officers. But without giving too much attention to those who “broke stuff”, the backlash is going to be very positive, too. Many people are going to participate in the cleanup and planning of more events, and Vancouver deserves to continue our big street parties. We will have a new social intolerance for drunken destruction of any kind.

The riot can potentially affect Vancouver in a very different way. We risk being grouped with LA, Detroit, and Oakland. The press has already labeled the rioters as “hockey fans”, but we know they aren’t. For the next few years we will likely see the same reactions as Lakers fans receive: they are known to riot. Whether LA wins or loses, Lakers fans riot! Whether the Oakland Raiders win or lose, they go stabbing! The consequence of such a well-marketed sports team is the ability to congregate large masses of people and evoke mass emotional reactions.

But the reality and conclusion of all of this is that anger never fueled the riot. It was a thirst to break stuff. The Canucks fans deserve little blame–it’s everyone who chose to purchase a jersey and participate in the rage. Luckily, Vancouver has shown before that it will be able to shake this chaos in only a matter of time.