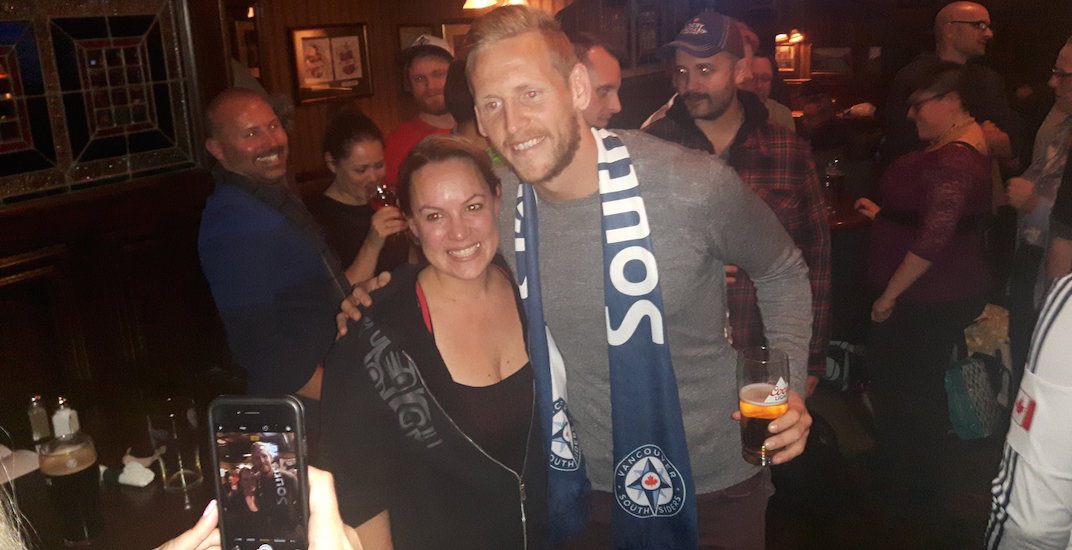 They just wanted to say ‘thanks.’

When news surfaced last week that David Ousted wouldn’t be back with the Whitecaps next season, many fans were upset. The team’s longtime goalkeeper, Ousted had been a fixture in the lineup since 2013.

We want to express our sincere appreciation to @David_Ousted for his time at #VWFC. He was the leader we needed when times were tough. He inspired hope and challenged us all to try harder. Best wishes to David & his family. We shall never forget to fight on a f—ing Saturday. pic.twitter.com/KTscLgg43a

For members of the Southsiders supporters group – the fans that have literally had his back for five years – it was a tough pill to swallow. Not only is Ousted leaving the team, he could be gone from MLS entirely. There’s no guarantee that the 32-year-old will ever return to the pitch at BC Place, and thus, no chance to say goodbye.

“People were saying ‘I can’t believe we won’t get a chance to say goodbye,'” Southsiders Board of Directors member Aaryn Vivian told Daily Hive. “So I jokingly said to a few of the supporters ‘I guess I have a party to plan.'”

Out of that joke sprung an idea. With nothing to lose, Aaryn reached out to Ousted on Facebook. They wanted to throw him a going away party and it was up to the Danish keeper to name the time.

Within a couple of hours, Ousted suggested Tuesday at 8 pm. A Facebook event was launched and Danish sandwiches were ordered.

About 100 supporters showed up to share stories with Ousted at Doolins Pub on Granville Street.

Their hero arrived in style.

“When he walked in, he gave us a speech,” Aaryn explained. “Then all of a sudden he said ‘and I want to buy you guys a round of drinks’ so out come trays of shots.”

@HalfordTSN @JasonBroughTSN #WWL is that David Ousted is a legend. Last night he was buying shots for all the @Southsiders pic.twitter.com/xYc1QO7TFd

“He was a sport, he did a shot with us, and had a beer in his hand all night long,” Aaryn said, adding that he stayed for about three hours.

This is another one of those ‘only in soccer’ moments. The role that supporters play in the sport is truly something special and players recognize it. Ousted, in particular, always made sure to look up and acknowledge the fans on the south side of BC Place.

Thanks to all the fans for an amazing evening. Still can’t believe that @Southsiders put on this goodbye party for me.

While this is the first example of a Whitecaps player making plans with the supporters group in this fashion, it’s not the first time a Vancouver keeper has bought fans a round of drinks.

Aaryn told the story of Joe Cannon showing up unannounced to Oscar’s Pub when the team was playing at Empire Field. The Whitecaps had been beaten badly, so the keeper helped smooth things over with the diehards by buying a round of beers.

That’s not the only thing Cannon has in common with Ousted, as the pair are one of just four players – Carl Valentine and Jay Nolly the others – to be presented with a lifetime membership to the Southsiders.

“Honoured to be made a lifetime Southsiders member tonight,” Ousted said on Twitter at the end of the evening. “I was very happy to get the chance to say goodbye to all of you.”

Amazing way to say goodbye last night. Truly appreciate the fans for putting all this together. Got some memorabilia that will always be with me and remind me of the great years I spent in Vancouver. Thank you. #southsiders #greatfans #curvacollective

In an era where fans are increasingly skeptical of professional athletes, what Ousted did was wonderfully simple. Have a beer. Share some stories. Say goodbye. Say thanks.

The Great Dane makes his grand entrance @doolins! We love you @David_Ousted, thank you for being EVERYTHING this club is supposed to be. #WBWW pic.twitter.com/J8jz9mvC3W

LEGEND. One of several artworks and tifo projects being signed by the fans tonight to honour @David_Ousted. #WBWW pic.twitter.com/cS0fnWThCh

It surely takes a HUGE set of balls for a Dane to stroll into an Irish pub on today of all days, but here he is to meet with his fans. Thanks @David_Ousted! pic.twitter.com/GuhbW5JvNK

Ousted! Ousted! Thank you again, @david_ousted_official_ for your passion and professionalism. We'll cheer you on … https://t.co/JjuiaaXLAW pic.twitter.com/XrzlXehQZR

Thank you @david_ousted_official_ for your dedication and passion for Vancouver and the Caps. It's still hard to believe that we won't be holding your two stick high again, but I'll be supporting you no matter what. Thank you @aarynvivian for organizing this on such short notice ❤️

Awesome to meet @david_ousted_official_ in person! The best #goalkeeper #whitecaps ever had, the @d_degeaofficial of #Vancouver Good luck for your next adventure and hope to see you play for #denmark one day! #soccer #farewell

It was a privilege getting a chance to chat meet @david_ousted_official_ he's a real classy dude. Shame on you @whitecapsfc for letting such a talented player go. #whitecaps #ousted #southsiders #number1