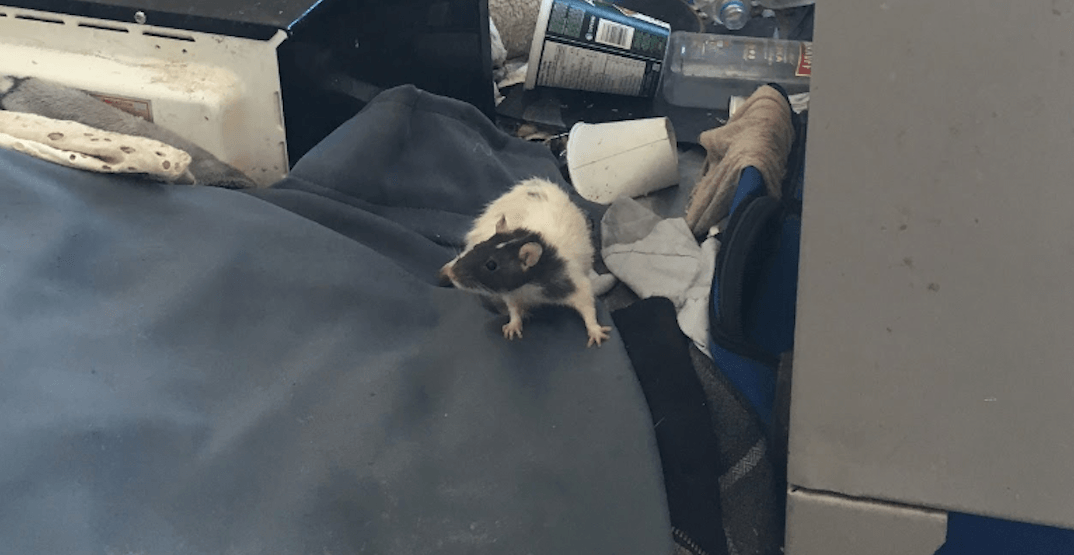 One of the many rats in the SRO. (Humane Solutions)

“We entered the unit and every square inch was just covered in rat feces, used needles, and debris,” he told Daily Hive. “The fridge and stove were ripped out of the wall, and there were swear words painted on the windows.”

And that wasn’t even the worst of it.

“Rats were pouring out [of the unit], they were jumping on us, and started crawling up our legs,” he recalled. “It was wild.”

But beyond just witnessing the physical chaos of the place, Abercrombie said the whole situation represented one that was full of “turmoil.”

“This isn’t a situation where you come home and have your animal companions,” he said. “This woman was in an absolute disaster of a place.”

Abercrombie is the owner of Humane Solutions, a pest control company which specializes in humane methods of pest control and poison-free approaches to the issue.

He said he and his team discovered the situation after receiving a call from the building manager who informed them of a “problem resident” living in one of the building’s micro-units.

“The preliminary estimate was that there were 30 or more rats living in the space,” said Abercrombie

And when they arrived at the scene that’s exactly what he and his team saw – and then some.

“52 rats crawling all over the place, looking for food – absolutely starving,” he said. “We had to assess whether or not these are actually friendly pet rats, or if this was a completely out-of-control situation.”

As part of the process, Abercrombie and team looked around to see if any of the city’s local animal shelters could take in the rodents.

However, because all shelters are “currently at capacity,” he said he and his team were left with the only option of humanely euthanizing the animals.

Work then began in setting rat traps in the building, and “we were catching them faster than we could set the traps.”

In a span of just five minutes, he noted, “we humanely killed, collected, and removed 22 rats.”

A breeding problem “out of control”

From what he can tell, Abercombie said the problem all began with the woman’s decision to get two rats – a male and a female – as companions.

Unfortunately, the rats ended up breeding, which resulted in more breeding, and before she was able to handle the issue herself, the problem had grown beyond her control.

Abercombie said the building manager and the women had gone back-and-forth with each other “for basically two months” regarding the rat issue, before he and his team were called.

At that point, the woman was “put on a thing called ‘shelter leave’ and was kicked out of her place for a week,” said Abercombie. “Basically we went in, and had a few days to get all the rats out.”

Following their work, a cleaning crew was sent in “which is absolutely gutting that place,” he said. “They have to take out all the drywall for example.”

And even though he makes his living in the pest control industry, Abercombie said this case in particular stands alone.

While it does shine a light on the local – and global – issue of rat overpopulation, Abercombie said this particular situation is “more a story of someone who has been completely failed by basically the healthcare system.”

The resident needs “mental and addiction help and she’s just not getting it, and that’s the reason that this thing got out of hand in my opinion,” he said. “Not just because of the rats.”

Making matters worse, is the seemingly never-ending cycle of how the majority of rat issues in the city are handled, ” he said.

“We’ve come across some data that shows there’s millions of dollars falling into rodent control on the Downtown Eastside,” he said. ‘”Only about half that is actually being put towards controlling these rodents, and pretty much all of that allocated budget is just going towards poison applications.”

The problem with this approach, he said, is that it doesn’t actually address the root problem, and instead “is just endlessly poisoning the never-ending flow of rodents in and out these structures.”

As a result, people continue to live in infested buildings and “even though they’re spending millions of dollars trying to fix the situation, nothing is improving.”

The reality, said Abercombie, is that any rodent problem inside a structure is the result of a hole – or access point – in and out of the structure.

And as soon as a rat uses an access point even remotely regularly, “they lay down a pheromone trail, so even though you might eliminate the population from a property,” he said. “It’s just a matter of time before more of the population picks up that trail and walks directly into the structures and continues the cycle.”

As such, Abercrombie he and his company takes a different approach.

“What we do instead is identify these points, improve the structure, stop the flow, isolate the population in-and-out and deal with what’s left inside,” he explained. “You can actually get a really fast, permanent, economical result.”

Still, Abercombie said this particular job was no ordinary case.

“This person had no control over anything: her substances, her house, nothing,” he furthered. “The fact is, she got a breeding pair, and it got out of control. Two rats can turn into a couple million over the course of a couple years.”