I guess they weren’t bluffing.

After months of speculation, the Vancouver Giants have officially announced that they will relocate to Langley, signing a 10-year deal with the Langley Events Centre, beginning next season.

Fans south of the Fraser River will no doubt be excited about the news, while fans in Vancouver, Burnaby, and the North Shore will likely be less than thrilled.

“We don’t want to lose them. That was one of the hardest parts of this.”

Fans on the west side of the Port Mann Bridge will have a longer commute and a toll charge to contend with, though parking will be free at the LEC.

So why the move?

“With the new bridge, new infrastructure, the new connector roads from Delta, all the infrastructure that’s gone on in this area over the last 4-5 years has made this a lot easier of a decision than it would have been five years ago because it would have taken a lot longer to get here” Toigo explained. “This is not a hard place to get to, from anywhere.”

The team will keep the name ‘Vancouver Giants’ and they will retain their presence in Ladner at the team’s practice facility.

“The numbers came back staggering, how much support we would have by moving to the Langley Events Centre. It’s no secret that the attendance certainly hasn’t been what it was once at the Coliseum.”

“Just being in a building this size, is probably worth four or five wins a year, just because we’re really going to have home ice advantage and our guys are going to be excited about it.”

That much is likely true. The LEC, which has a capacity of 5,276 with the possibility of expanding by up to a thousand more in a more confined space than the Coliseum, should present a raucous atmosphere. That was something that was lacking at the Coliseum in recent years, where the upper bowl was partitioned off and the lower bowl sparse. 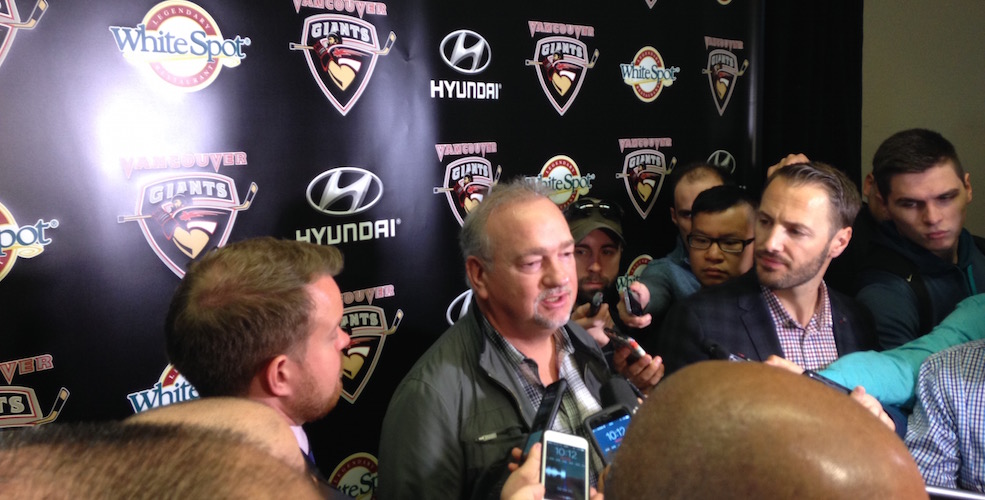 “This decision is not a reflection on the PNE or its staff. This is a business decision based on creating the best environment for success for the Giants. We’ve enjoyed our time at the Pacific Coliseum – it’s the original home of the Vancouver Giants and a big part of our history.”

Toigo pointed out that the team has not burned any bridges with the PNE, and the Coliseum would still be the ideal location for future Memorial Cup or World Junior tournaments. The Giants, in conjunction with the Canucks, will be looking at bringing the 2019 World Juniors to Vancouver.

Of course, with all business decisions, this came down to money.

“From a financial perspective this costs, probably half of what it did at the PNE.”

Apart from the size of each arena, is the issue of revenue from concession stands and arena rental costs. It’s a fair assumption that the Giants got a better deal on both at the seven-year-old facility in Langley.

Unlike when the AHL moved to Abbotsford, the hockey team will not be getting any kind of subsidy or financial guarantee.

“We look forward to starting a whole new era here. We’ll have a new GM, a new coach, and a new team going in the right direction.”