It seems like there’s always a new ramen place popping up in downtown Vancouver and it’s not hard to see why. Ramen is big business with hordes of ramen crazed Vancouverites descending on every new Japanese noodle shack. It’s rather common to see long lineups in the Ramen District (next to the Hammock District), which is what I call that stretch of Robson Street near Denman that has more ramen per square foot than anywhere else in Metro Vancouver.

Marutama Ramen is the latest restaurant to throw their hat in the Ramen District ring. That being said, Marutama is not new to the ramen. They have four locations in Japan as well as a dozen more around Asia. Vancouver is their first foray into the North American market. 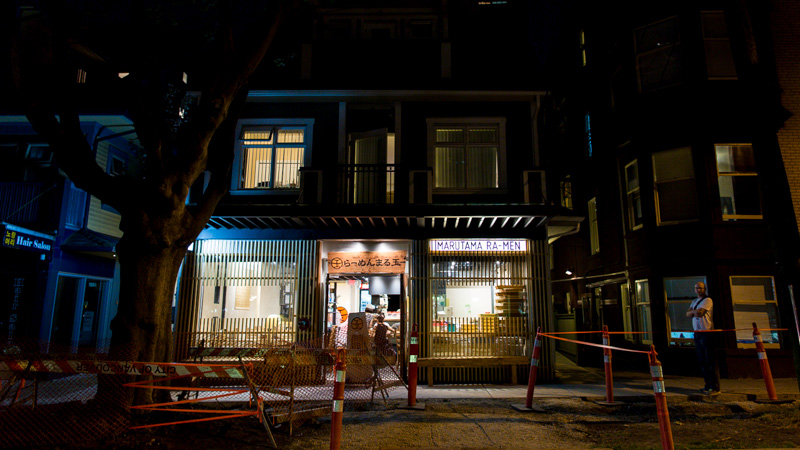 Marutama is located in the bottom floor of a nicely restored house on Bidwell just off Robson. I know I said these places are usually busy but that’s during the lunch and dinner rushes rather than 9p.m. on a Tuesday. There are about 20-25 seats in the restaurant, half of them at the counters. My friends and I took up half of the large table in the middle that has seats for 10. 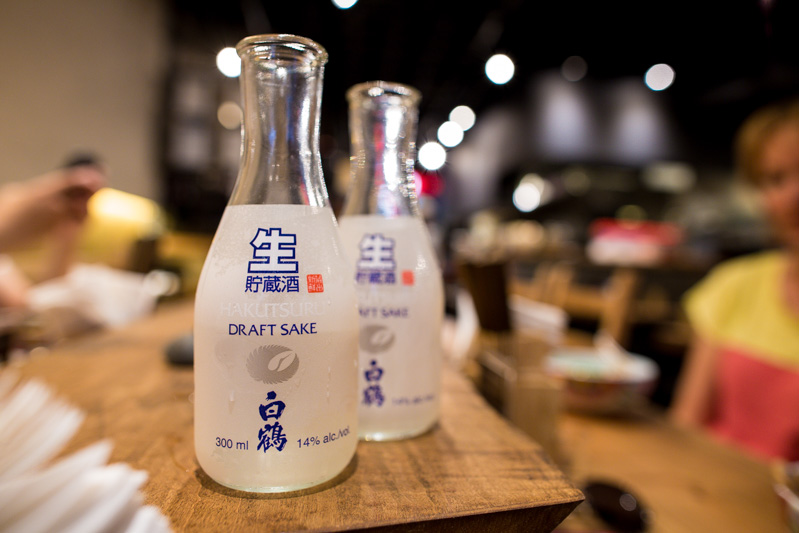 I forgot to ask what sort of drinks they have available as my dining companions already ordered some of these so I assume they’re licensed. Forgetting things happens a lot when you have two or three or twelve of these. A light, chilled sake is a great complement to the meal. 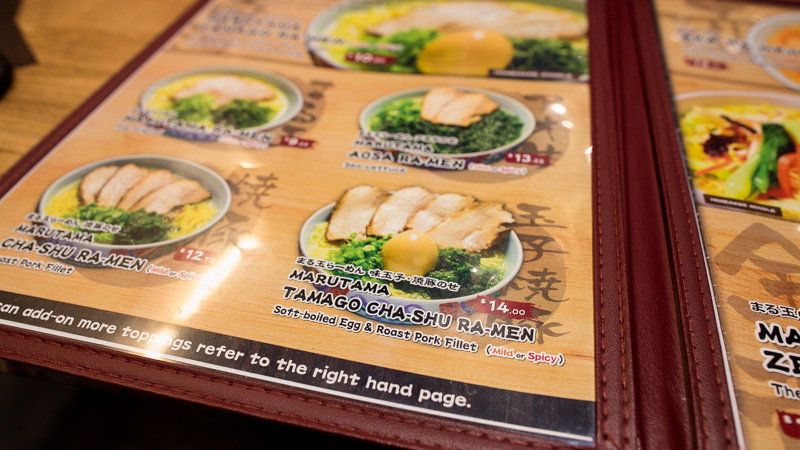 What makes the ramen at Marutama rather unique is that their soup is chicken-based rather than pork-based. Just about all other ramen in town is made with pork broth or a pork/other meat mix. There’s still slices of tender cha-shu in the bowl but the soup is bright yellow. Prior to this, my only experience with chicken ramen was instant ramen…but that was “chicken”. There were a few options on the menu but I couldn’t really tell them apart by anything other than how much pork you get.

Also, you might have noticed that Marutama is actually rather expensive. Most places like Kintaro are in range of $8 a bowl while some of the more expensive, like Santouka, start at around $10. Marutama starts at $10 but goes all the way to $18 for the Zenbu (The Works). Once you start getting into the add-ons and extras, that number gets even higher.

One of reasons why has to be that Marutama makes their ramen noodles in house. I’m honestly not sure if any other Vancouver ramen joint does that but of the ones that I’ve tried, I believe they all buy from somewhere. 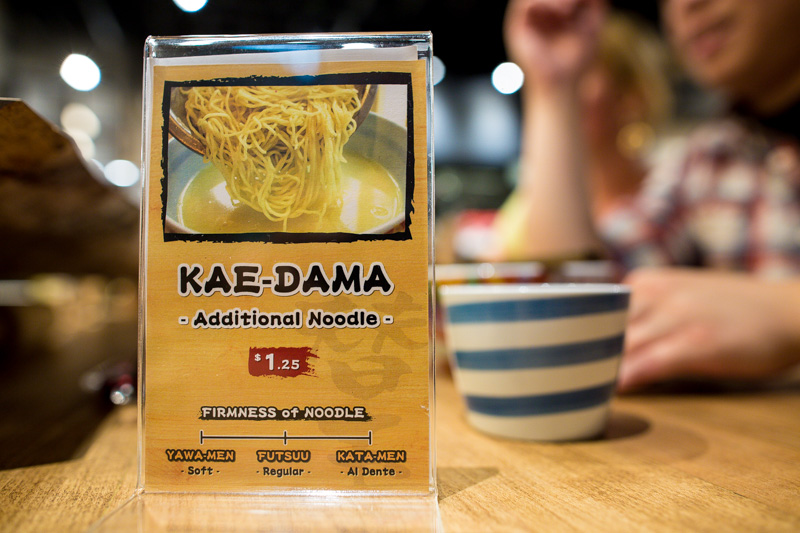 The good news is that if you want to double up on your noodles, you can for just $1.25. The noodles at Marutama are of the thinner variety. Whether you like this sort of noodles or the thicker ones will be entirely up to your preference. I highly recommend getting kata-men or noodles cooked al dente. The texture of the noodles is just better with a little bite. 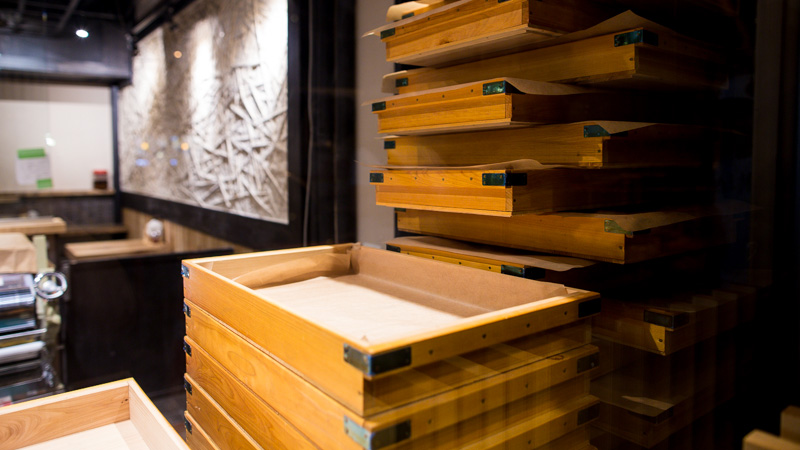 Put your order in early, though. Not that it takes a long time (I received my extra noodles seconds after I ordering them and they were pipping hot) but if all these empty trays are any indication, they could run out. On the left, you can catch a glimpse of the machine they use to hand make their ramen noodles. 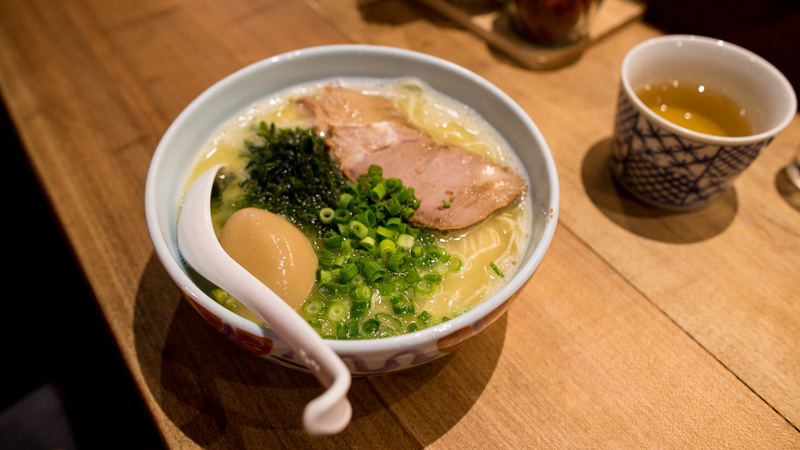 The most basic bowl is the tamago ramen ($10.50), which is their most popular choice. You can get it without the egg but trust me, you want the egg. 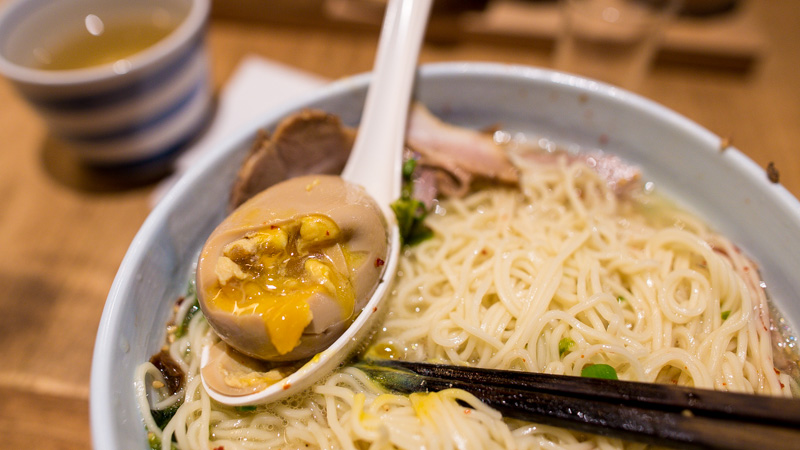 The soft-boiled eggs are fantastic, packed with flavor. Crack one open and you’re bound to hear bow-chicka-wow-wooowwwww ohhhh yeah in your head as you get to that runny golden yolk.

Up at the top of this post is the tamago cha-shu ramen ($14), which as far as I can tell, is the same as the tamago ramen except it has a couple more slices of pork. The pork is perfectly cooked and tender. However, maybe it was the chicken broth but the pork’s flavor doesn’t stand out despite the texture being absolutely spot on. 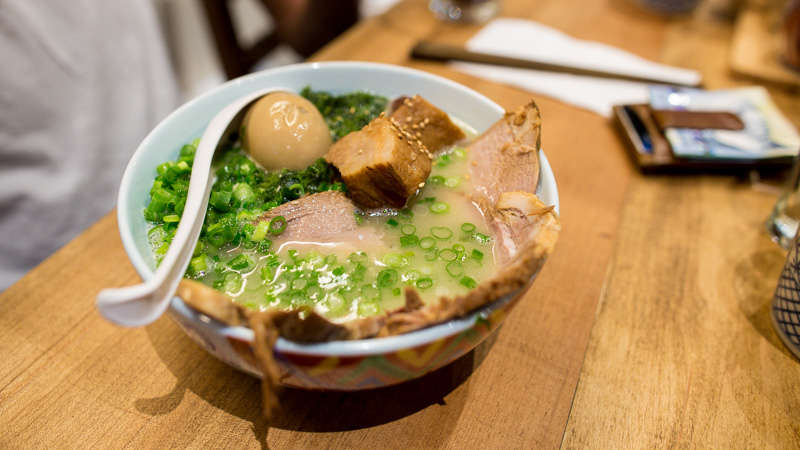 The Zenba ($18), or “The Works”, adds a couple hunks of roast pork to go with the cha-shu and soft-boiled egg. Marutama also adds heaping portions of green onion and seaweed to their ramen. They add freshness and balance to meal that’s otherwise rather heavy in the fat and meat departments. 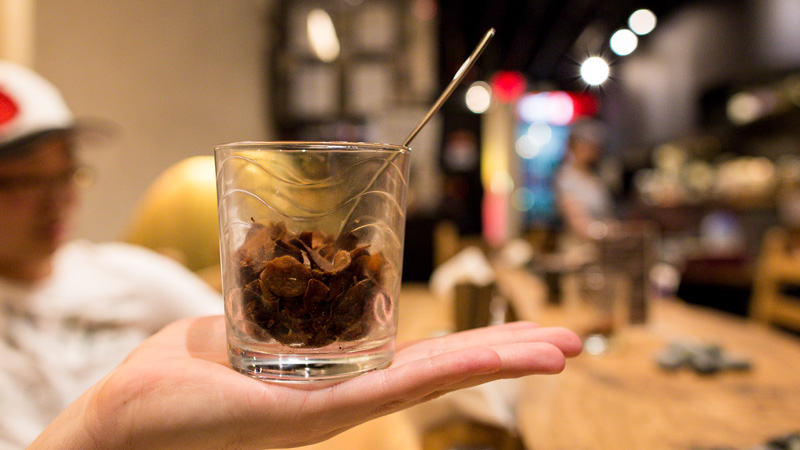 You have a choice of spicy or mild broth, which you can further customize with a number of condiments such as chili powder, sesame seed and these delicious fried garlic chips. 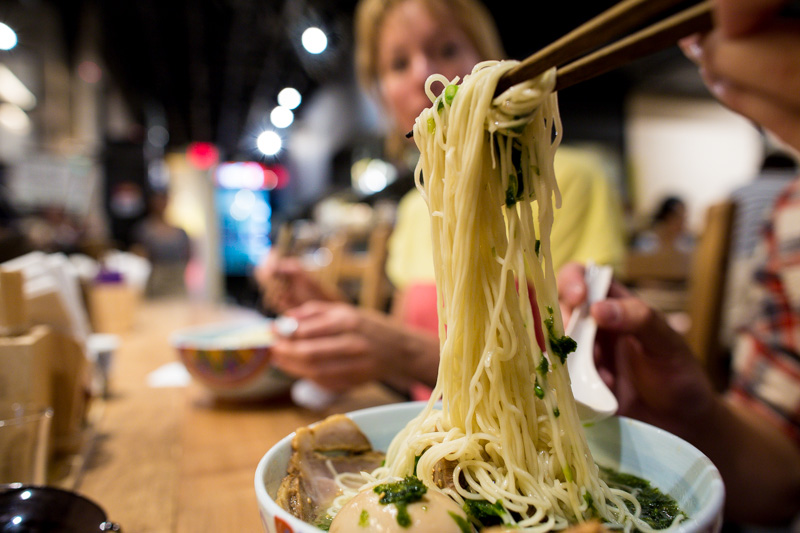 The house made ramen noodles are amazing, especially if you get them al dente. I had the regular first and al dente is just better. Freshly made noodles don’t need as long of a cook time and they have a great flavor all their own.

The chicken broth is very different from the pork broth we are used to. It’s certainly a lighter broth, especially if you regularly order the fatty pork broth but it certainly isn’t fat free. There’s a thickness to it and you can see the fattiness on the surface. It’s a rich chicken flavor, like it’s been slowly simmering for hours upon hours. That being said, even after eating a bowl and then the extra noodles, I didn’t feel completely stuffed like I usually do at every other ramen place.  In fact, I could’ve gone for another round. 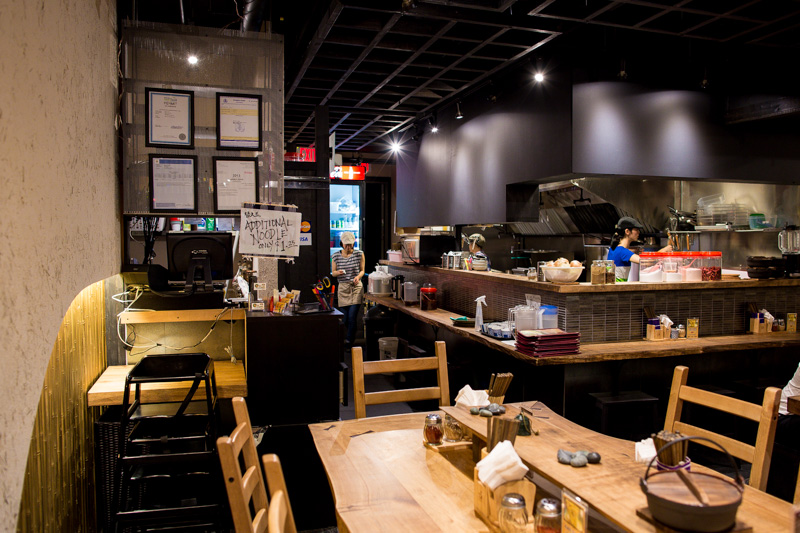 But I didn’t. Mostly because $18 for ramen already felt a little silly and $36 would’ve felt ridiculous. New York and San Francisco might get away with that but that’s as near as makes no difference double the price of just about any other ramen place in the city.

But I just don’t crave the ramen at Marutama like I do tsukemen at Santouka, which is at the top of my personal ramen mountain (in the Ramen District). I enjoyed my meal but didn’t leave wowed. It’s like I’m sure The King’s Speech is a great movie. It won all those awards but I don’t want to watch it like I want to watch giant robots beat up skyscraper-sized monsters with aircraft carriers in Pacific Rim. I have no doubt that Marutama is a fantastic restaurant and apart from the price, I don’t have anything particularly negative to say about it. I have no problems paying for great food but the ramen here didn’t quite hit the spot like I had hoped.

That’s more of a personal preference. This is still a very good place that I would recommend people try, especially since it’s one of few places making their own noodles.  With the quality of food at Marutama, it wouldn’t surprise me at all if many of you disagreed with me.