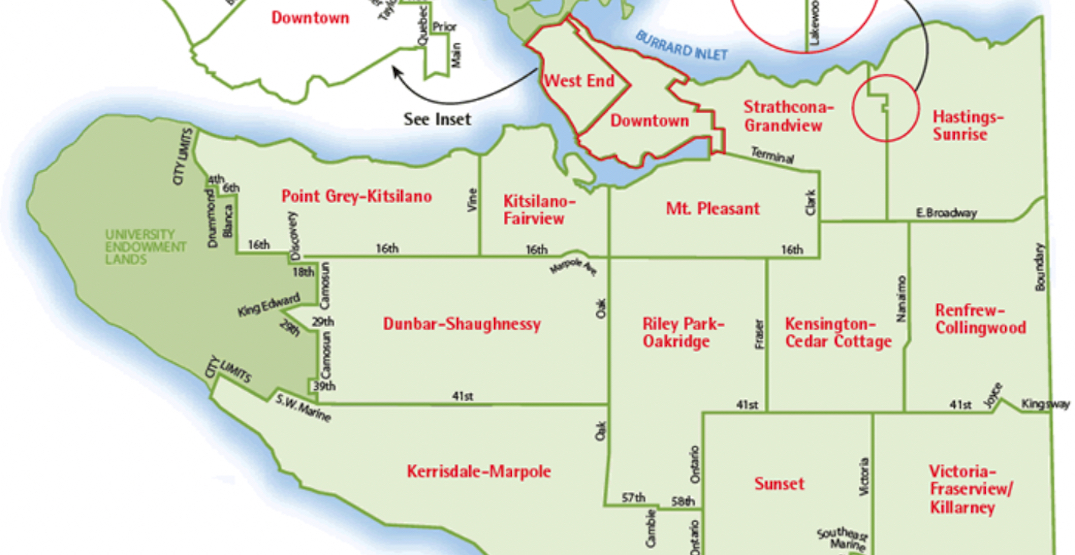 What if residents in the City of Vancouver were to select their elected municipal officials based on their own civic riding?

According to the findings of a survey by Research Co. conducted this month, 58% of likely voters in Vancouver support the idea of abandoning the prevailing at-large system of selecting city councillors, and replacing it with a system of wards, where residents in a specific geographic area select their own city councillor.

In Vancouver’s theoretical ward system, the 10 city councillors currently selected under the at-large system would instead each represent a ward.

The mayor would still be selected with the existing at-large system.

Most voters who supported Kennedy Stewart (66%) for mayor in the 2018 civic election support a ward system, followed by Ken Sim (63%) and Shauna Sylvester (56%).

Vancouver is currently the largest city in Canada without a ward system.

Vancouver residents rejected a ward system in a 2004 plebiscite

Nearly two decades ago, the City of Vancouver conducted a formal process to consider whether it should abandon the at-large system and adopt the ward system for city councillors.

After City Council created an electoral reform commission to study the idea and consult with the public, a plebiscite was held in 2004, with residents rejecting the idea: 54% (35,813) voted against and 46% (30,499) in support.

At the time, the proposed ward names and boundaries were:

The 2004 proposal called for the at-large system to remain for the selection of the mayor, Vancouver Park Board, and Vancouver School Board, and all city councillors would vote on matters put before City Council. 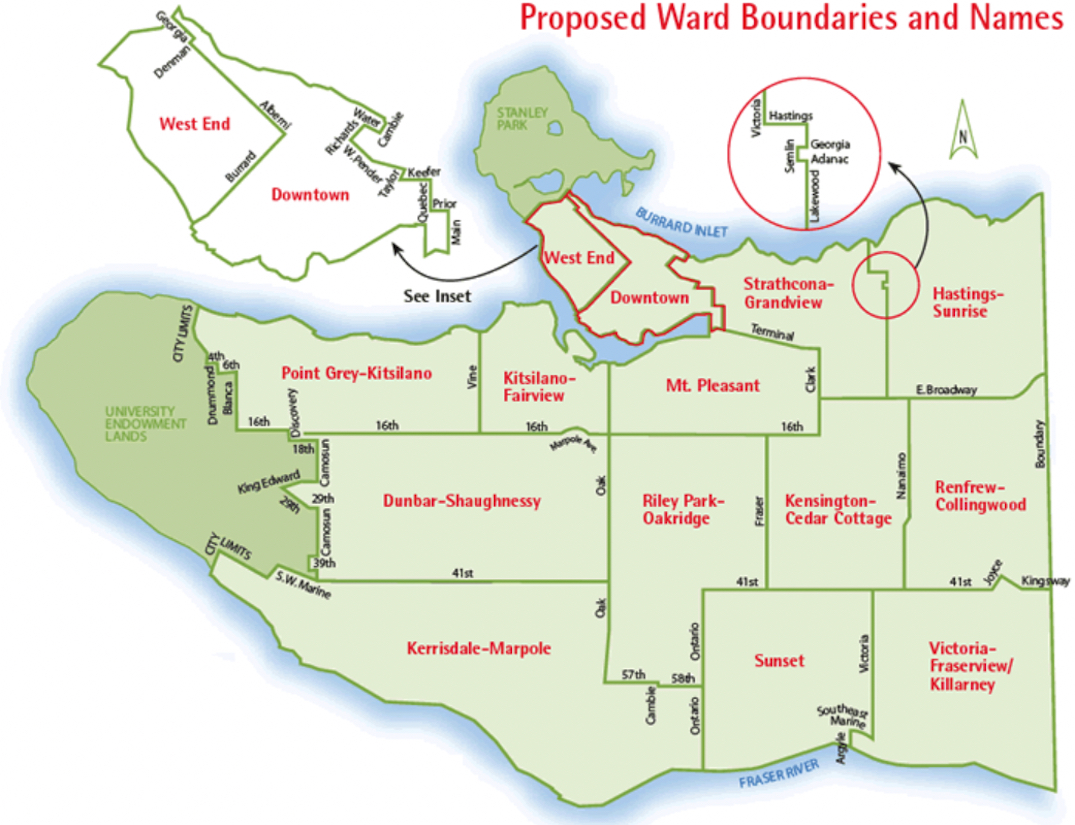 Implications and tradeoffs of a ward system

A ward system would of course be a big step towards improved representative democracy.

Aside from the neighbourhood-specific representation, according to the 2004 commission’s report, a ward system would elevate the representation of social, economic, cultural, and ethnic minorities by giving them a higher chance of being elected in a ward system.

City councillor candidates campaigning for a ward would have an easier approach of focusing their time, resources, and funding within a neighbourhood, as opposed to campaigning across the city under the at-large system.

The commission asserted the at-large system “crowds out” minority voices, while the ward system would encourage a more diverse range of candidates and make it more likely they would be successful in being elected to City Council, especially with the ability to have lower financial resources to conduct a campaign. This also means running as an independent could be more viable, instead of having to join a party for the financial and resource supports.

A ward system would also allow campaigning to be highly targeted through area-specific data collection, and it would particularly benefit anyone who has access to riding-specific data from provincial and federal elections — given some of the likely similarities of the geographical areas between civic wards, provincial ridings, and federal ridings. 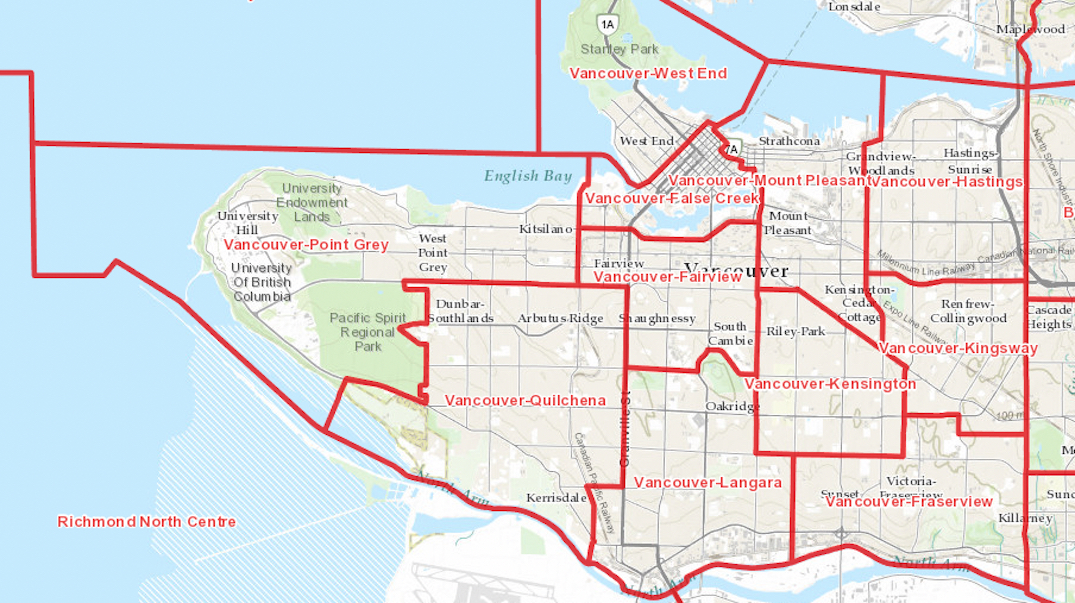 Provincial MLA ridings within the City of Vancouver. (Elections BC)

In the political landscape just ahead of the civic election on October 15, 2022, any discussion of electoral reform comes at a time when some residents and businesses in certain neighbourhoods feel their voices are not being heard by City Council — ranging from the lack of real action on crime and public disorder in Chinatown and other areas of the downtown Vancouver peninsula to neighbourhoods against the planned pace of change in their communities from major building development projects and new community plans.

There is also a real risk that a ward system could amplify existing divisions between neighbourhoods, with each city councillor essentially acting as the mayor of a neighbourhood.

The political implications of the at-large system incentivizes city councillors to consider and weigh issues and solutions through a city-wide lens, especially since many issues and solutions on the municipal level are not isolated to any one neighbourhood or area. It helps anchor broad city-wide responsibility and accountability.

At least two current city councillors already largely focus much of their political capital on being the de facto direct representatives of specific areas of the city, namely the Vancouver Westside and the Downtown Eastside, respectively.

During the 2018 civic election, the transition to a ward system was one of the top campaign promises made by Kennedy Stewart, who is running a 2022 mayoral re-election campaign under his new Forward Together Vancouver party banner. Stewart previously suggested 10 wards with each city councillor representing a ward. However, Stewart did not bring the matter of electoral reform forward during his first term to date.

Any adoption of a ward system would require approval and legislative changes by the provincial government.

Wards in other Canadian cities

Canada’s seven largest cities — Toronto, Montreal, Calgary, Ottawa, Edmonton, Mississauga, and Winnipeg — each have ward systems for their respective city councils. But it should be noted that wards in these cities are seen as an absolute necessity given the large geographical areas of the municipal governments, which are each exponentially geographically larger than the City of Vancouver.

For instance, the City of Ottawa’s jurisdiction spans 2,800 sq km, making an at-large system far less manageable than the 115 sq km under the City of Vancouver.

In one recent debate, Canada’s most populated city was deemed to have too many wards, resulting in ineffective governance and dysfunction.

In 2018, Ontario premier Doug Ford reduced the number of wards in the City of Toronto from 47 to 25, with each city councillor now representing an average of 111,000 residents. Legislation introduced by Ford’s government also requires Toronto City Council to mirror its civic wards with federal and provincial ridings.

Ford’s move was controversial, but he defended it for the ability to lower the City’s operating costs, and improve the ability to efficiently govern.

“The City is paralyzed by a bloated and inefficient council where debates can go on for days but no decisions ever get made,” wrote Ford in a September 2018 op-ed, with his reasons largely aligning with much of the same public criticisms of the existing makeup of Vancouver City Council under the at-large system.

“It doesn’t matter if you are talking about David Miller, Rob Ford, or John Tory. No matter who the mayor is, time and time again we see that transit, infrastructure, and housing just cannot get built… That’s why our government introduced the Better Local Government Act in July. This Act would have reduced the size of Toronto City Council to put an end to the gridlock that is paralyzing the city.”

City of Toronto’s previous plans for 47 wards starting in 2018: 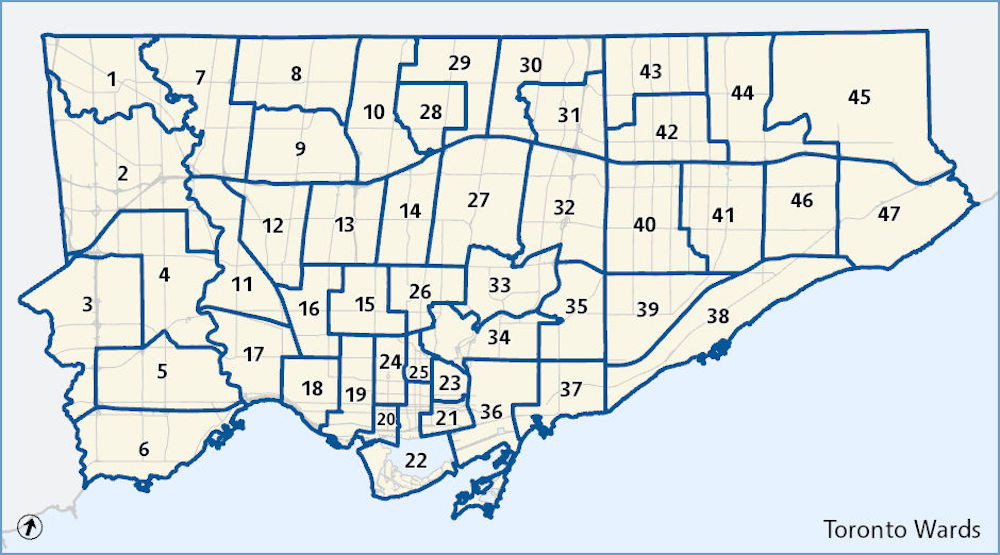 City of Toronto’s enacted system of 25 wards starting in 2018, as mandated by Ontario’s provincial government: 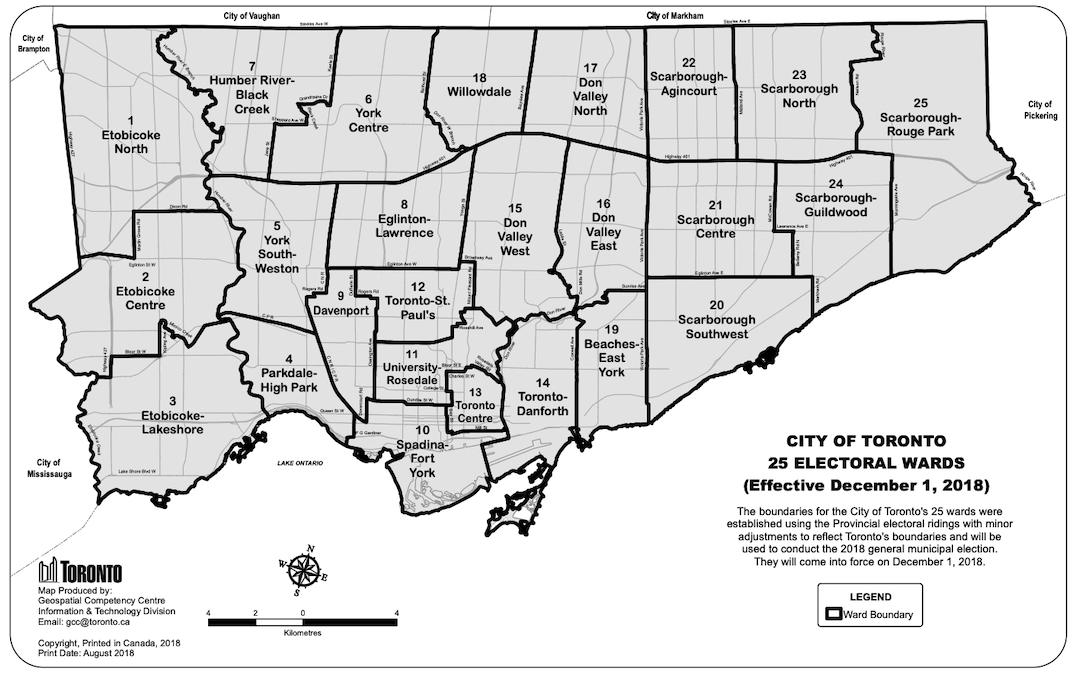 In September 2020, Surrey City Council directed City staff to study and report back on the feasibility of transitioning the City of Surrey to a ward system. With a land area of 316 sq km, Surrey is nearly three times large than Vancouver, which can present challenges to representation of the municipality’s diverse communities and needs.

Surrey previously had a ward system up until 1957, with seven city councillors each with their own ward, including White Rock as a ward. The decision to abandon the ward system and transition to the at-large system contributed to the outcome of White Rock’s separation from Surrey that same year, when the provincial government introduced legislation to create the City of White Rock. Residents of the then-Surrey neighbourhood of White Rock did not feel they were properly represented by their municipal government, compared to the higher level of attention being received by other areas of the city.

More than half a century later, the opposite is suggested to be true for South Surrey, which previously included White Rock.

“Arguments against the ward system in Surrey focus on the potential for another ward of Surrey to separate as to why the current at-large system should be maintained. However, although Surrey may not be formally divided into wards, there still exist varying socioeconomic and cultural differences across the city when comparing the municipality’s six communities,” reads a 2012 UBC SEEDS analysis on the idea of electoral reform in Surrey.

“Summing up the problems in Surrey, Whalley is coping with crime and homelessness, Fleetwood and Cloverdale face the issue of growth, Guildford struggles with the challenge of densification, Newton has a large population of immigrants, while ‘South Surrey residents struggle with the question of whether to serve red or white wine with salmon.’ This tongue-in-cheek statement speaks both to the unique concerns of each community as well as the sense that South Surrey largely differs from the rest of the city. Yet, as proved by the analysis of community representation, it is South Surrey that is overrepresented while other communities have little or no formal representation of their interests on council.”