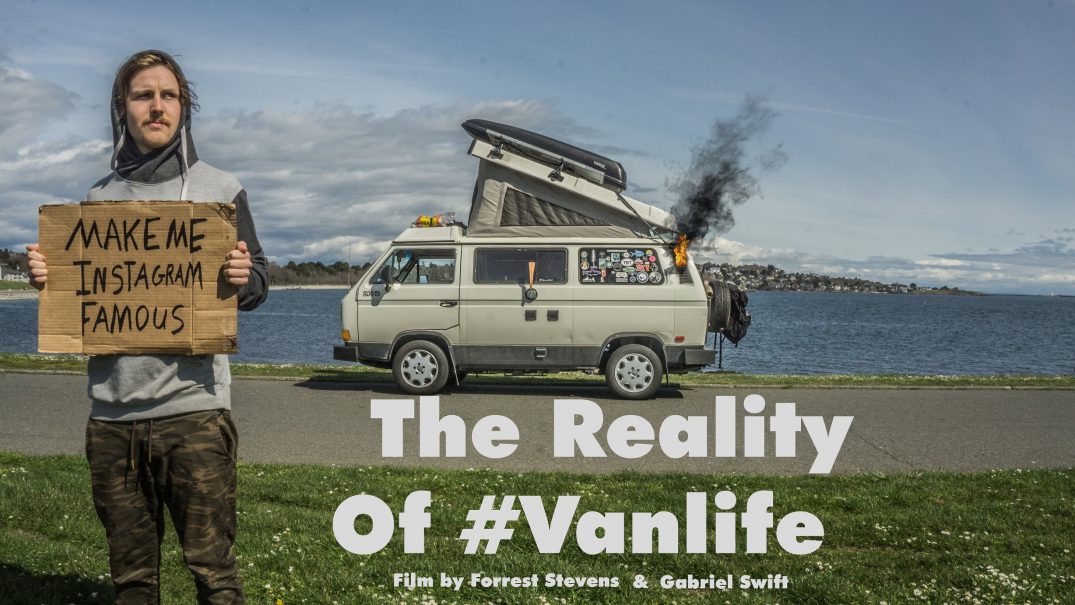 When you search #VanLife on Instagram, you will see nearly five million posts of brightly lit photos showcasing adventurers smiling in their home-on-wheels gazing out windows, holding pets, cooking on portable stoves, or sitting on their beds layered with blankets.

But how is living life in the fast lane really?

BC native, YouTuber and filmmaker Forrest Stevens wanted to find out for himself what it would be like to cut back to the bare essentials for his documentary The Reality of #VanLife.

In the documentary, Stevens shares his #VanLife experience in Tofino and road tripping down to California, exposing what you don’t see posted online, and showcasing the freedom that comes with the nomadic ways.

“I was poking fun at it in my documentary and exploring the idea of… kinda is #VanLife the new American dream? And is #VanLife over-glamorized? And what is actually #VanLife and what is the difference of  ‘van life’ and the hashtag that you see online?” explained Stevens.

The idea came to him a few years ago when he and his partner bought a minivan to turn their road trip to Ontario for a wedding into a camping trip on the way to see more of Canada.

“I was making YouTube videos at the time and kind’ve found that a lot of people were interested in the stuff that I was doing related to the van and I found that… I found that van life, like there was a whole community behind it, and so I kind’ve doubled down and reached out to some of my friends when I got back to British Columbia, I was living in Tofino, and a lot of people out there were living in vans and unique ones at that,” he said.

The next year, he and his girlfriend switched gears into the #VanLife. 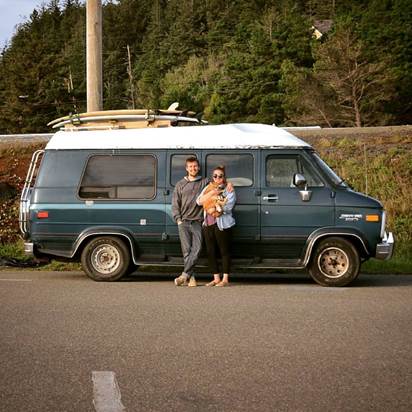 Stevens and his girlfriend Emily packed up their cat Ronnie for four months, between October 2015 and January 2016, and moved their lives into a Chevrolet G20 passenger van.  But modifications had to be made, he says.

“Built it out and kind’ve converted it, because it had seats in it when we bought it, so we had to build a bed frame and, you know, get 12-volts refrigeration and lighting and do some modifications to it to make it into… kind’ve a little tiny home,” Stevens said.

He said they built their approximate queen-sized bed about two feet off the ground out of two-by-fours and a piece of foam for a mattress, to leave them space for storage underneath. 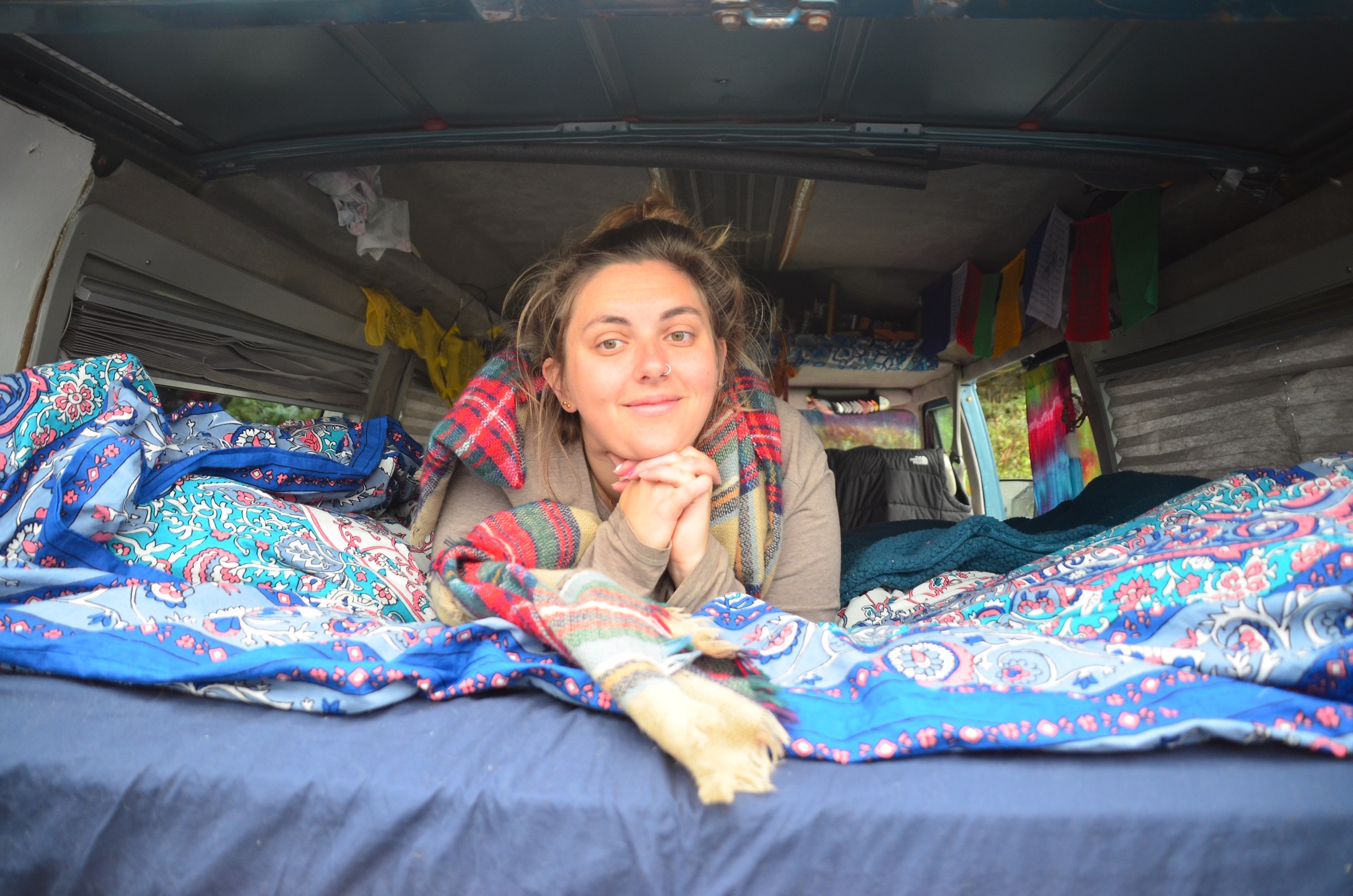 “Because when you’re in a van you’re obviously in a super super limited space so you have to think about, you know, utilizing all the space and… especially utilizing the space vertically,” Stevens said, adding they had to create storage room as well.

“Our [van] was actually really really basic and we kinda did that just because we wanted more living space in it so even though I just said that you’re supposed to utilize space as much as possible, we did leave it a little bit more open so in the back of the van we had the bed and then in between the front seats and the bed probably maybe four foot by four foot space of just living space.”

Stevens said they had a collapsable table in the living area where they would eat and cook using a portable stove, “so all of our cooking and food could be put into a bin and then brought on to a picnic table or cooked outside or something… because we’re cooking with propane, so you don’t have to deal with ventilation problems that you have in a small space.” 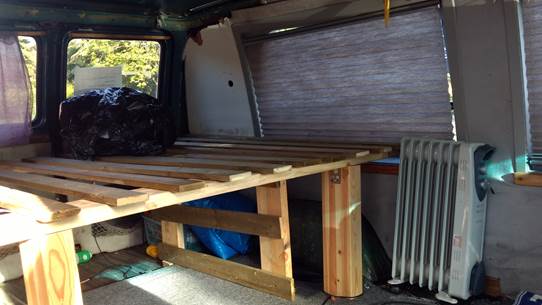 As for the “plumbing” side of things, Stevens said they would use gas stations and coffee shops when they would get their morning brews, adding a lot of tenants living the #VanLife don’t have washrooms, and “some of the bigger vans will put in like a compostable toilet or just like a little porta potty that you can empty, but honestly a lot of people just rely on public washrooms and, either at cafes they go to for internet anyways or they have a pee bottle and then they have, you know, like gym memberships where they can use showers and washrooms.”

As for parking, Stevens said when they were home in Tofino, they never ran into any problems.

“I think #VanLife is a little bit easier there except for there’s competition like there’s other people, like a lot of people doing it but we didn’t find any trouble… it was kinda an off season as well, like it wasn’t summer so people weren’t you know looking for people staying in their vans or camping illegally,” he said. They mostly stayed parked in friends and families’ driveways and were never ticketed, even though that’s a big worry for people thinking about moving into a van to live.

“There’s a lot of places that you can park legally now, a lot of areas have kind’ve opened up to the idea of people sleeping in vans as a part of a solution for, you know, either lower income or, you know, to do kinda with the housing crisis in certain areas, there’s more… they’re a lot more lenient now,” he said. 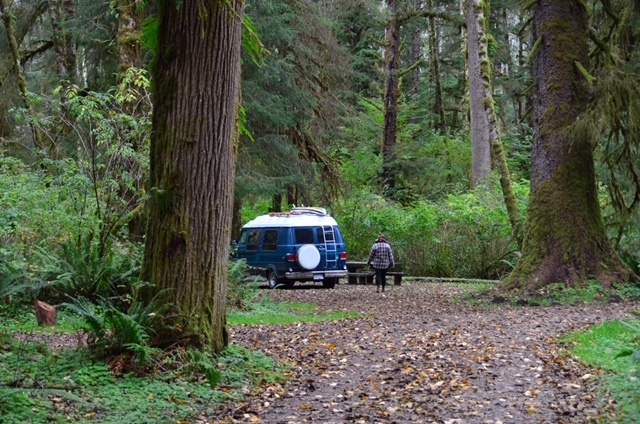 Looking back, Stevens said a highlight was feeling a sense of ownership for his home because he wasn’t paying rent: “It’s something that young people don’t really get as much anymore so it was something that I really looked over to and really enjoyed.”

Weather concerns were the only lowlights, including what happened when it rained.

“We had a leak in our roof, so every time that it rained we were parked at an angle that angled our backs down, rain would come in through the back doors… so dealing with that was just like an ongoing problem and something you just have to deal with with old vans.”

Stevens said when he lived the #VanLife, his every day life was no different from when he lived in a house, the only difference was that his home was on wheels.

A new type of freedom

“My takeaway of #VanLife is that it has become a representation of freedom in a lot of ways and… and I think that if somebody is interested in, you know, living alternatively, I think #VanLife is an easy step in that direction and it will teach you about yourself and teach you about systems of sustainability, which is something that’s important to me and it just… it represents a new type of freedom in this world where you’re not tied down to mortgages or renting and you’re able to travel which a lot of people want to do — so if you want to do it, do it,” Stevens said.

Today, Stevens said he’s now focussing on building his film business, and has a goal of getting back into vehicle dwelling with a new vehicle that will sustain him and his girlfriend longer than four months and “a long time, potentially years.”