Hundreds of thousands of people are expected to descend onto the beaches and parks in and around English Bay tonight for the second show of the 2017 Honda Celebration of Light.

Taking to the night skies will be the United Kingdom, represented by Birmingham-based Jubilee Fireworks with a running theme of “Kiss The Sky”.

“We want to startle people with some moments of shock and awe, but calm it at times with emotional pieces of music, and that is where the theme ‘Kiss the Sky’ comes from,” Andy Wiggins, the team leader for Jubilee Firewoks, told Daily Hive.

“We’ve tried to choose music that fits well together. It’s not just a long, boring piece of soundtrack, there are lots of highs and lows.”

Wiggins’ named a few songs that will be played, providing a hint of the range in variety of that can be expected: “Sirius” by The Alan Parsons Project, “I Really Like You” by Carly Rae Jepsen, “Ocean Princess” by Thomas Bergersen, “Sign Of The Times” by Harry Styles, “Fix You” by Coldplay, and “Rocky” by DJ Tiesto feat. Kaaze.

But he stopped short of spilling the beans on which Canadian song his team has picked for this year’s competition requirement of including one shortlisted Canadian song to celebrate Canada 150.

On Saturday, Team Japan played Leonard Cohen’s “Hallelujah”, leaving Bryan Adams’ “Summer of ’69” and The Tragically Hip’s “Ahead By A Century” as the remaining songs that have yet to be played at this year’s festival. 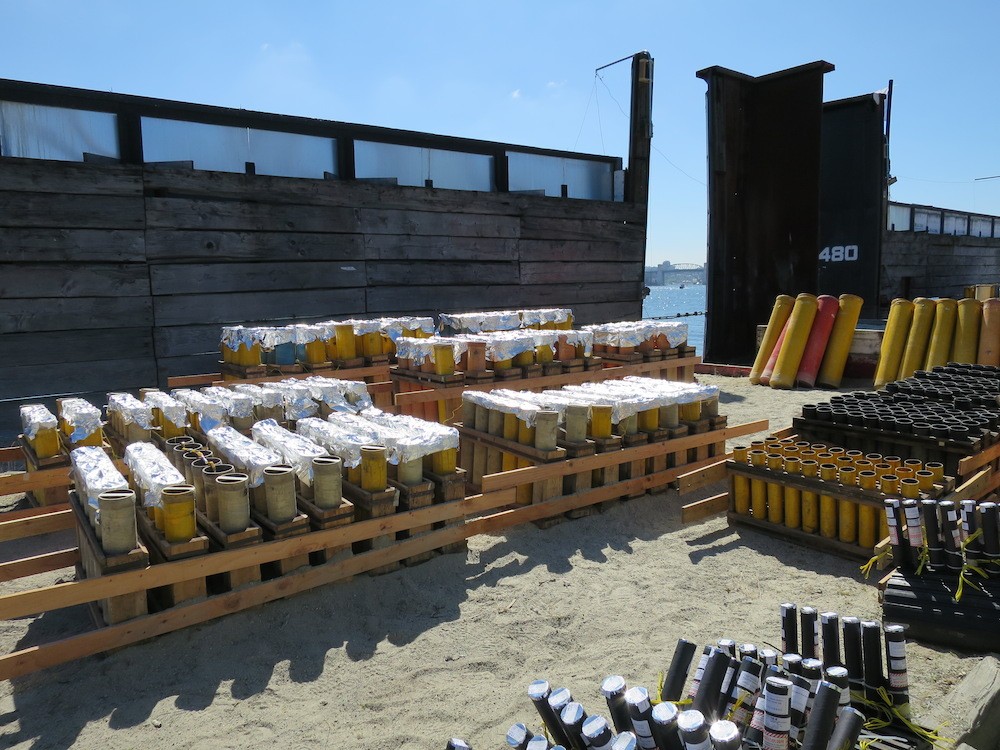 Approximately 10,000 fireworks will be used for the UK’s show – everything from the very small single shots to 12-inch shells, the largest legal fireworks in Canada. It takes about three days to set-up the show on the barge.

Wiggins said his team flew directly to Vancouver after staging the seventh show of this year’s L’International des Feux Loto-Québec in Montreal on Saturday.

Each of the three shows will be three minutes longer than normal this year, bringing the full length of each show to up to 28 minutes. The shows start at 10 pm sharp every night, and the live music simulcast is available on radio station LG 104.3 FM.

One other major change to this year’s festival is the relocation of the concert stage and festivities that normally occur at Sunset Beach to Second Beach in Stanley Park.

The latest weather forecast by Environment Canada indicates there will be no cloud cover, but visibility will be poor due to wildfire smoke. This means far-flung locations like Jericho Beach and Spanish Banks might not be visible fireworks viewing areas for this show.

It will also be a very warm night, with temperatures hovering at 23°C (28°C when humidity is factored) at 10 pm when the fireworks begin exploding.

A low tide is forecasted to coincide with the fireworks, which will maximize the size of viewing areas on the beaches.