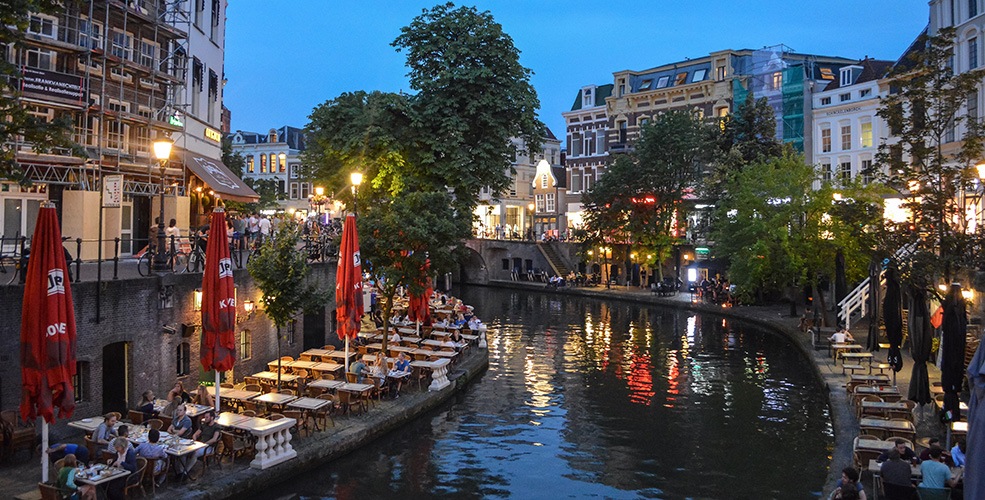 After spending 10 magical days in Amsterdam, our family was somewhat hesitant to board the train and begin the fourth leg of our #CyclingAbroad adventure, emotions that eventually manifested themselves in tears from the children. How could Utrecht – The Netherlands’ fourth largest city – possibly compare to peddling through Amsterdam’s scenic canals, crowded cycle tracks, and serene streets?

Stepping onto the platform after a short, 30 minute train ride, we were immediately perplexed. Due to extensive construction to the station and surrounding area, we were funnelled into Hoog Catharijne, a sterile shopping mall much like those we grew up in back home. Things were looking bleak. Did we just leave a cycling utopia for a suburban nightmare? Then we got outside, and a sense of relief swept over us.

Suddenly, we found ourselves in the midst of a lively scene, surrounded by cobblestones, an eclectic mix of modern and historic buildings, with pedestrians and cyclists happily mixing, and not a single car to be seen. As we made our way on foot to our home for this part of the journey, we wandered through narrow laneways, along ancient canals, and past patios that seemed to call our name. Despite our worries, it was clear Utrecht had more to offer than just its proximity to Amsterdam.

“The biggest village in the country” 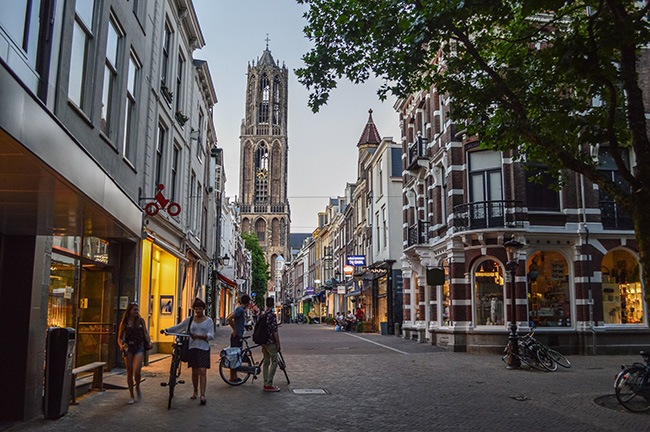 Utrecht’s unique character can be explained, in part, by its small size, which it owes to a rich, 2,000-year history. In its infancy, Utrecht marked the northernmost edge of the Roman Empire, something commemorated today through steel rails embedded in the cobble streets. In the centuries that followed, the Roman outpost transformed into the axis of Christianity in The Netherlands, as well as a trading hub, due to its strategic location along the Rhine, protected by a surrounding moat.

Although the city eventually grew beyond the moat, Utrecht is still lovingly referred to as “the biggest village in the country.” For Saskia Kluit, CEO of the National Cyclists’ Union and President of the Dutch Cycling Embassy, the moniker has less to do with the geographic size of the city, and more to do with its physical scale.

“I strongly believe that Utrecht’s human scale has more to do with the local political culture than the result of the history,” Kluit claims. “We always balance between grand-city development schemes and not wanting to change a single stone.”

“Utrecht is lucky to be compact” 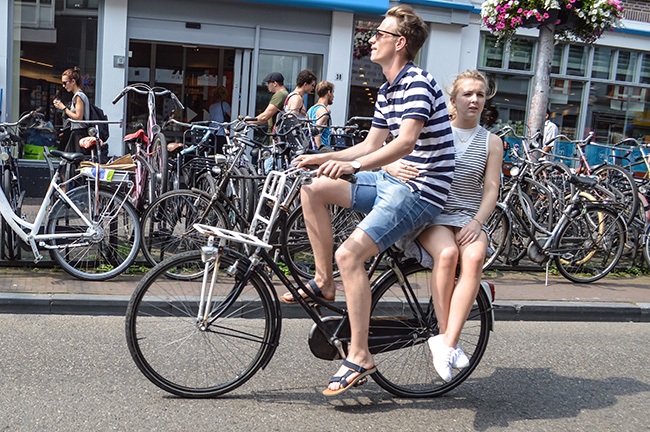 Mark Wagenbuur–of the blog Bicycle Dutch–was born and raised in Utrecht, and attributes the character of the city to its relatively recent growth. “Utrecht is lucky to be compact, especially compared to the other larger Dutch cities,” he suggests. “The city long stayed within the fortifications. Real growth only happened in the 20th century, so there are no large 19th century blocks like in Amsterdam or The Hague.”

The charm and scale of the city quickly won us over, and within an hour of settling into our flat off Biltstraat–a complete street that served as a hive of movement, commerce, and humanity–we were once again on two wheels, taking a slow meander along the city’s waterways, soaking up the various sights they had to offer. We later learned that– in Utrecht’s rush to become a modern, 21st century city–that stunning beauty was nearly sacrificed at the altar of the private automobile.

A site of cultural and historic significance 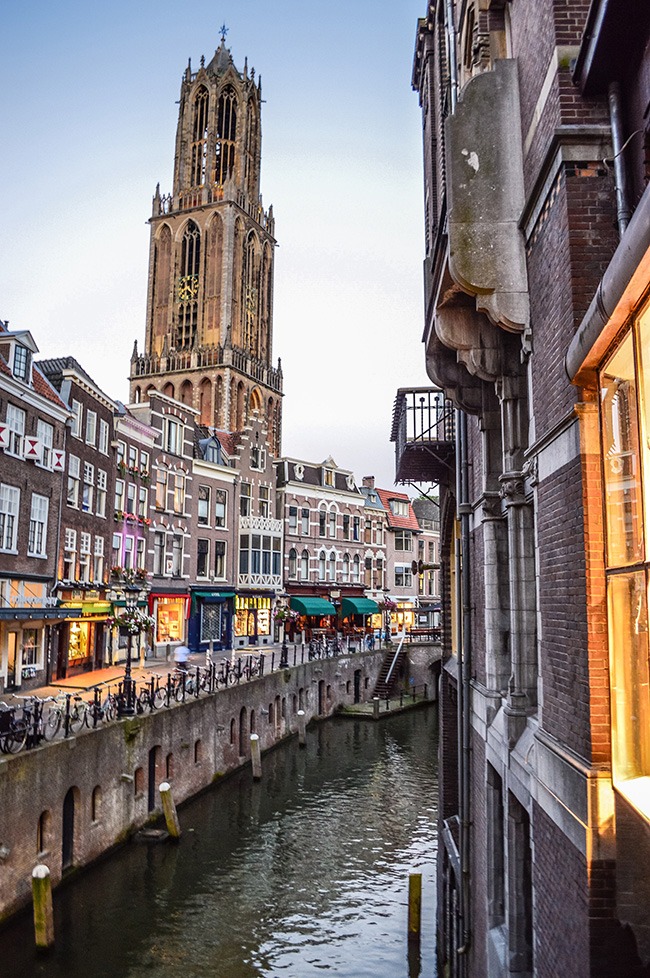 Like every Dutch city we had visited up to that point, Utrecht had its own flirtations with motordom after the Second World War. In the 1960s, while acutely focused on creating wider arterial roads for the impending motorization of the country, urban planners decided that – instead of trying to retrofit the medieval city centre – they would simply fill the historic moat, creating a wide “beltway” to improve traffic flow.

This infill began at the foot of one of the city’s newest complexes in 1968, home to Centraal Station and the newly opened Hoog Catharijne. Fortunately, residents and preservationists opposed alteration to the medieval buildings and waterways. They eventually attracted the attention of the Catholic Minster of Culture, who decreed it a site of cultural and historic significance, formally protecting it from the bulldozers.

“The motorway from nothing to nowhere” 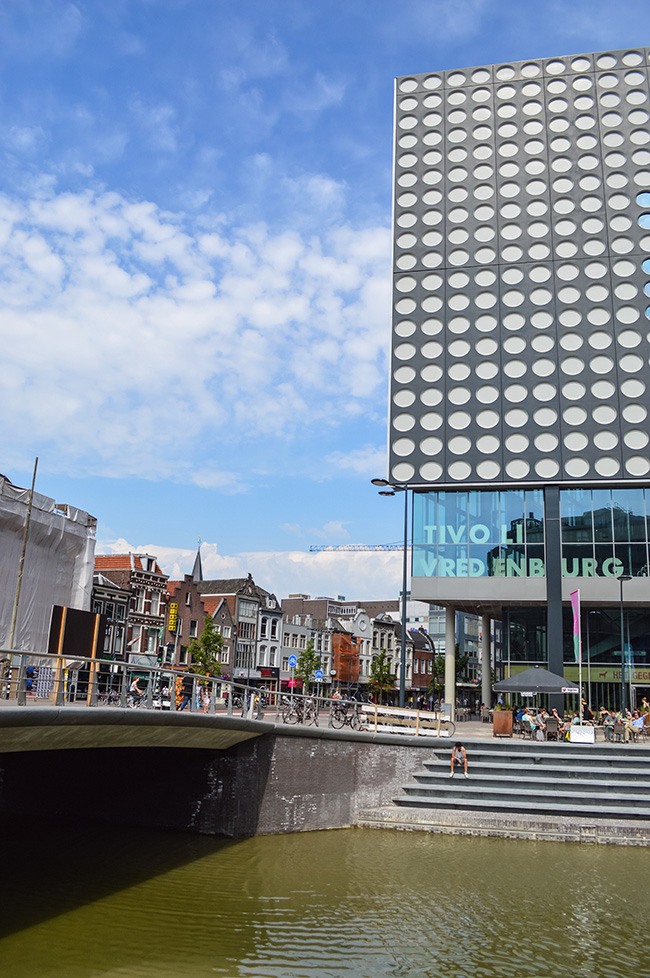 Strong opposition to widened arterials persisted for several years, halting further construction indefinitely. Wagenbuur refers to the completed section of roadway as the “motorway from nothing to nowhere”, and it stood, underutilized, for 30 years, until in 1999, under pressure from groups like “Utrecht weer omsingeld” (Utrecht surrounded by its city moat again), the council voted to restore the original moat.

By breaking the project up into manageable sections, city workers have been working tirelessly over the past 17 years to dig up the asphalt and refill the canal. Beginning next year, the city centre will once again be surrounded by a moat. Many, including Wagenbuur, believe that will be restorative for the city and its residents.

“The removal of the motorway is perfectly in line with new Utrecht policies that determine that the main road users in the city are people cycling and walking, and not people using private automobiles,” Wagenbuur writes on his blog. “The space in the city is not there for the flow of motor traffic, but for people living their lives.”

The busiest rail hub in The Netherlands 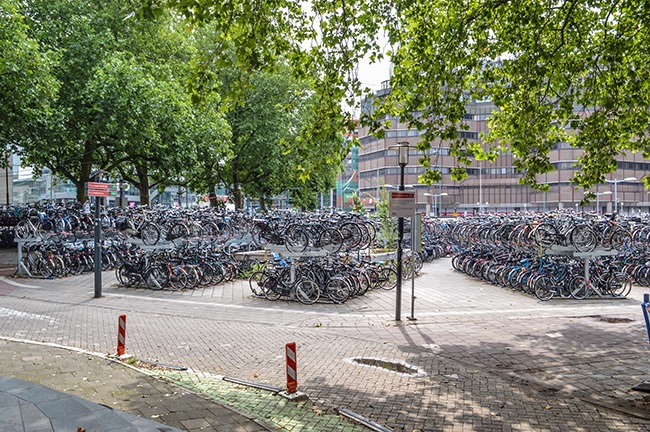 During our week in Utrecht, we were constantly in awe of how walking and cycling felt so relaxed and comfortable, in virtually every corner of the city. Even in areas where we interacted with cars and the rapid transit buses, everything flowed so effortlessly, regardless of the tremendous number of people out on the street.

But nowhere is this more apparent than at Utrecht Centraal train station. Acting as the country’s mobility hub, Utrecht station is the busiest in all of The Netherlands.

“You can travel easily in all directions, which is always handy. The Central station has more visitors a year than our national airport, with 88 million people traveling to or through it,” Kluit reveals. With the station in the middle of a €270 million facelift, it is expected, when completed, that number will jump to 100 million people. 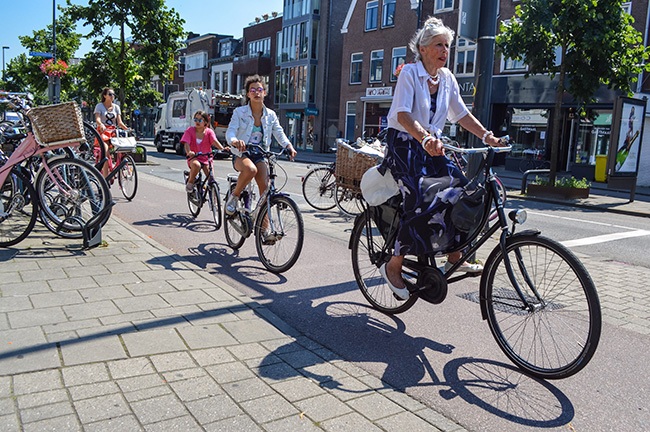 Of course, in a cycling country, people moving in and out of the city regularly bookend rail travel with a bicycle ride. Most Dutch train stations are designed to enable the bike-train-bike connection, but Utrecht’s position as a transportation hub makes the sheer volume of people arriving and departing by bike a significant challenge.

It was, in fact, home to the first ever underground bike parking facility in The Netherlands, built in 1938. Demand has since skyrocketed, and officials are currently building a number of large and ample “fietsenstallingen” (bike parking lots). Once opened, there will be secure space for over 33,000 bikes within minutes of Centraal Station. Meanwhile, Vredenburg – the adjacent high street – lays claim to the busiest cycle route in the country, moving an astonishing 27,000 cyclists per day.

In 2001, Utrecht was the natural choice to serve as the pilot city for OV-fiets, The Netherlands’ national bike-sharing scheme. For just €3 per 24-hour period, anyone can borrow a bike from any virtually any train station in the country, a convenient service that has only served to strengthen the powerful bike-train-bike combination.

An exceptional city on a human scale 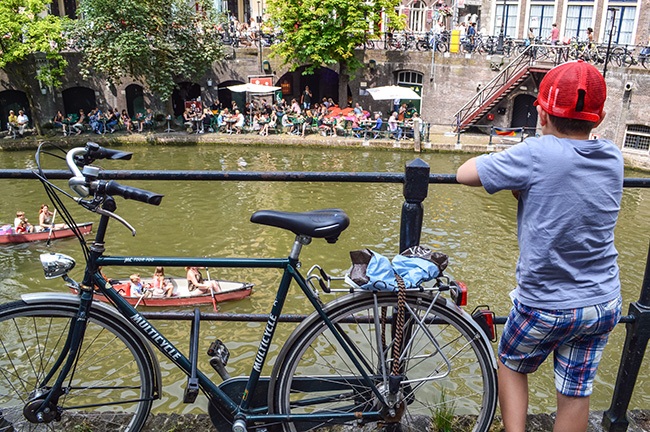 With its pedestrianized medieval centre, an ever expanding cycling network, and surrounding mid-rise density, Utrecht is an exceptional city on a human scale, and – despite our initial reservations – proved to be a favourite for our family. It may have had something to do with lower tourist numbers, or the beautiful streetscapes void of cars, but for all of its qualities, Utrecht truly felt like a place we could call home.

That could be why it took Wagenbuur 30 years to say goodbye, but only because it made things easier for his partner, happily returning by train every day for work. Or why Kluit and her family haven’t considered leaving after settling there in 2001.

“In Utrecht, there are a lot of places where our children can play, in the city’s numerous parks and even on a lot of the streets,” says Kluit. “People greet each other easily and in general we have a very relaxed culture among ourselves.” 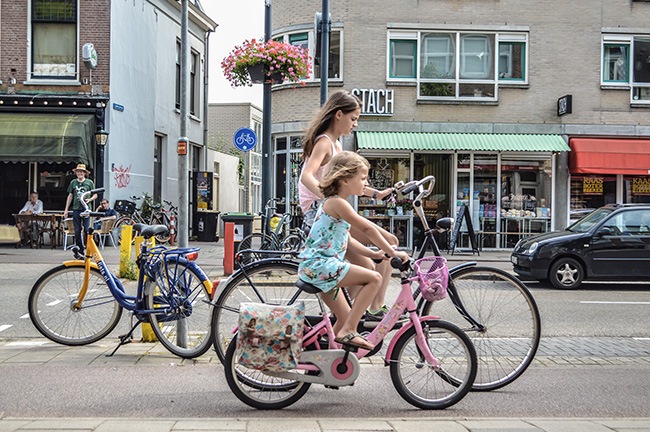 We were making the slow roll home from dinner one evening – on the aforementioned Biltstraat – towards the end of our stay. Our 10-year-old daughter was curled up in the cargo bike, while our seven-year-old son sat on his Mom’s rear rack. Something appeared to click in his brain: “Our city could be like this, Daddy!” he exclaimed suddenly. “Nice quiet streets, bike paths on both sides, hardly any cars, and way more people!” Indeed. It’s good to know that we’re all on the same page.

Modacity’s #CyclingAbroad adventure was made possible through the generous support of our friends at Daily Hive, Urban Systems Ltd., and Two Wheel Gear. To view the full collection of photographs taken by the authors in Utrecht, please click here.