Perhaps the first thing that comes to mind when thinking of Germany is Oktoberfest and drinking German beer. When we think of Germany and their cuisine it is probably not held in the same esteem as France and Italy. Maybe bratwurst sausages and schnitzel are your first thoughts? German cuisine has a lot to offer and it’s all good! For a taste of Germany head to the Deutsches Haus located at the corner of Victoria Drive & 33rd Avenue on the eastside – you will not be disappointed! The restaurant is located in the basement of the home for the local German community being the Vancouver Alpen Club.

The Alpen Club has been in existence since 1935 and, until the 1980s, the neighbourhood had a high percentage of Germans. The Deutsches Haus has been serving food for the past 40 years – so they must be doing something right! The German community supports the club (non-profit) and the restaurant, which utilizes traditional Deutsch recipes garnered over the past four decades.

The chef has spent a number of years working and living in Germany. The food is authentic German cuisine with many ingredients imported from the home country. For example, their sauerkraut comes directly from Germany. Very often, North American made sauerkraut is much more acidic and tart than the more gentler flavoured German sauerkraut.

The interior of Deutsches Haus has a real German feel and ambience. There’s lots of wood panelling and sturdy wooden tables and chairs. It is very basic surroundings with homage on the walls to German culture. If you have travelled to Germany, you will definitely feel at home. They serve bread before your meal, which comes from a German bakery located in Surrey, and is delicious.

First up, we try some appetizers. Being at a German restaurant, there was the definite need to sample some typical German sausages, so we ordered the Sausage Sampler. In addition to the four different sausages, there’s crispy onions, sauerkraut and two types of German mustard. The four sausages are Bratwurst, Weisswurst (white sausage), Leberkäse (German-style meatloaf) and Rindwurst (beef sausage). These sausages and accompaniments are very authentic German and a great sampling of four of the top German sausages perfectly cooked and presented. The flavours are subtle and the consistency of each sausage holds up to the knife. The crispy onions were a hit and added a different texture. The sauerkraut was so tasty and not like the average North American tartness – less acidic and slightly sweeter. 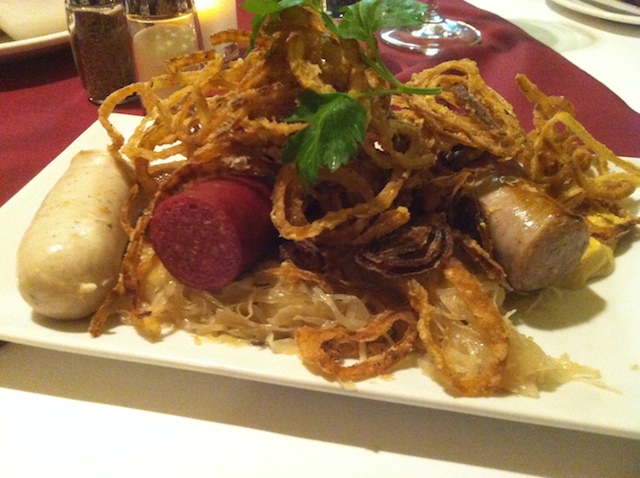 Next up were the Potato Pancakes served with Apple Sauce. They are well seasoned and fairly light. Sometimes potato pancakes can be dry, but these were just the right moisture with a great texture, good consistency and crispy on the outside. 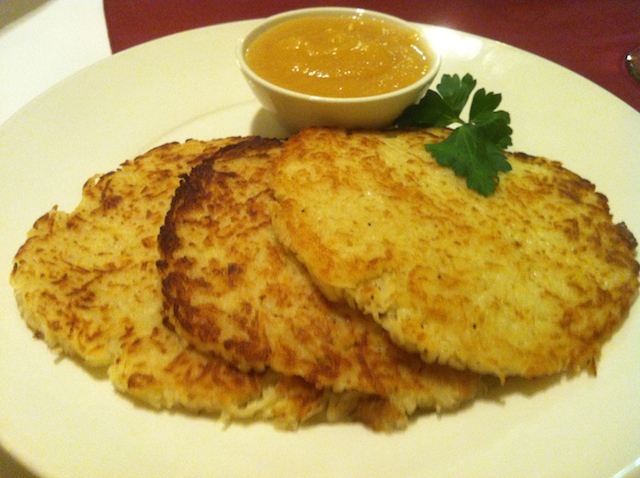 Germans are known for their love of meats. The Rinder Rouladen comes with Spaëtzle (German noodles) and Red Cabbage. This dish is a German meat roulade consisting of bacon, mustard, onions and bacon wrapped in thinly sliced beef and then cooked. The meat and fillings were tender and made for an explosion of flavours that melted in the mouth. It’s a savoury dish with the right amount of spice. It’s interesting that it smells spicy, but the flavours are not. The German noodles (spaëtzle) are delicious and definitely need to be tried. They have that egg-like feel that complements the Roulade perfectly. The red cabbage was fabulous being full of flavour. 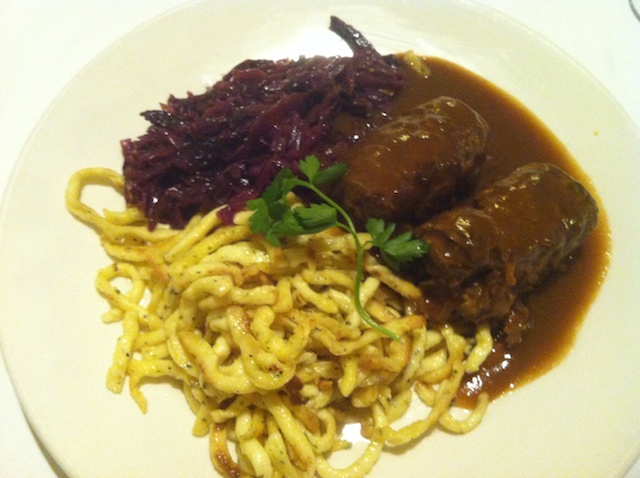 German Pork Hock (Schweinshaxe) is very popular in Bavaria, but also served in many other parts of Germany. This dish is served with fried potatoes (Bratkartoffeln), red cabbage, mustard and gravy. The meat was tender and juicy while the skin was crispy and tasty with some yummy fat on the inside. The fried potatoes were delicious and a perfect complement to the pork meat. The gravy, mustard and red cabbage added more tastes and colour. This is a dish favoured by many Germans. 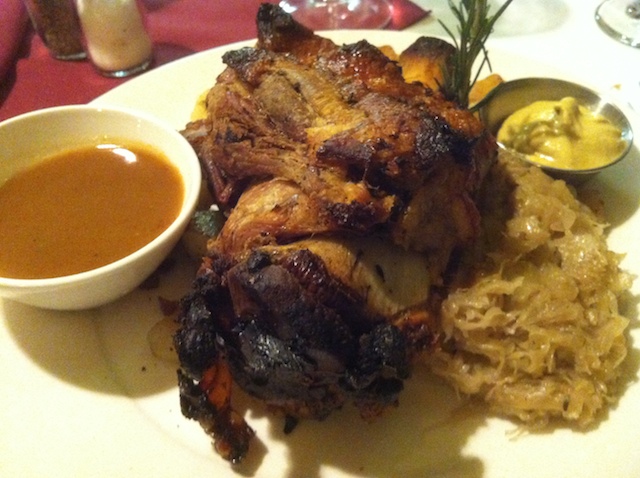 Of course, you can’t go to a German restaurant without trying their Wienerschnitzel. This dish is thin, breaded and deep fried from veal. The meat was tender and not dry. The outside was crispy. Exactly, what a good schnitzel should be. Very tasty and filling. 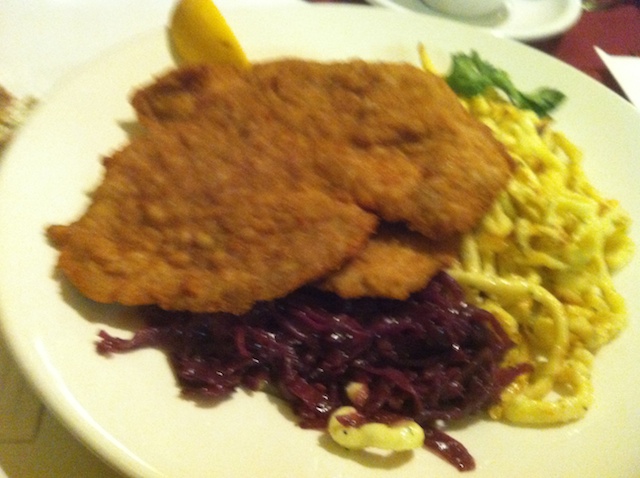 Most German cuisine is comfort food and will fill you up very quickly. Deutsches Haus serves hearty sized portions. Another positive is a great selection of German beer and wines. There are three different schnitzel styles. If you’re interested in sampling a number of dishes, you can order the German Feast for four. Appetizers range from $5 to $12. Entrées range from $13 to $24. There is plenty of free parking adjacent to the restaurant in the front and back entrances. Bring a good appetite and make a reservation!