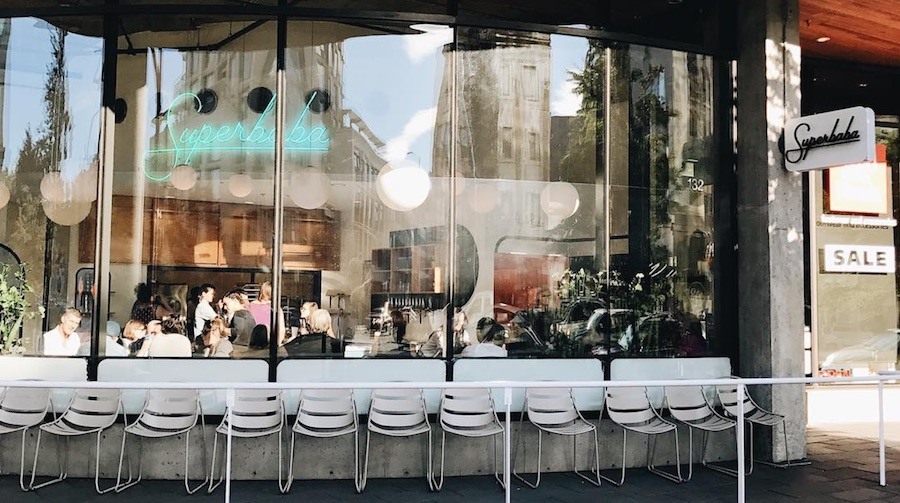 If you’re in Victoria and in search of some new eats, there’s not much newer right now than the just-opened Superbaba.

It’s a casual Middle Eastern spot that is the project of three major Vancouver-area foodie power players: Café Medina, Tacofino, and The Dallah. The restaurant had fun teasing passerby when their storefront declared “This is not a Tacofino.”

While Vancouver brunch mecca Café Medina probably needs no intro, nor Tacofino, The Dallah is a modern Middle Eastern chef who has been doing exciting pop ups in and around Vancouver for some time now.

The Dallah is Dallah (Abdallah El Chami), who is passionate about sharing the traditional foods of Lebanon. Trained and well-traveled, Dallah brings to the table fresh, exciting, bold flavours of a lesser-known cuisine.

Now the culinary mind behind Superbaba in Victoria, The Dallah’s doing dishes like fries with Sumac mayo; kebab, falafel, or sabich (eggplant) sandwiches and bowls; fried cauliflower; and all the delicious dips, sauces, and sides from hummus to crispy chickpeas.

Located in downtown Victoria in the Atrium building, Superbaba just opened this week. Keep an eye on their Instagram for updates as they work out the opening kinks, and keep them in mind for your next meal in BC’s capital city.