The unemployment rate in Canada is at its lowest level since January 1976.

According to Statistics Canada, the downward trend continued in December, decreasing to 5.7%, which is the lowest since comparable data became available 42 years ago.

December’s growth followed the build earlier in October and November, which boosted gains for the fourth quarter, making it the most “robust rate of quarterly growth” since the second quarter of 2010. 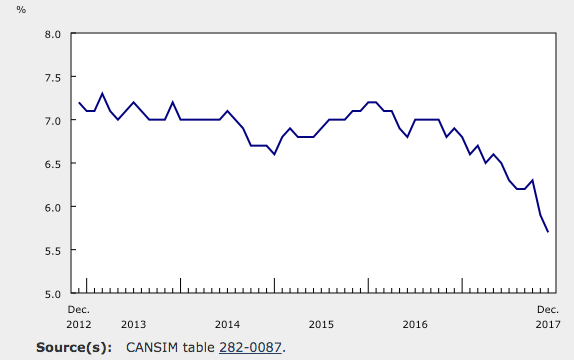 Across Canada, the unemployment rate followed a downward trend in the 12 months to December.

In Ontario, employment grew 2.5% in 2017, which is over double the growth rate recorded in each of the previous two years. The unemployment rate in the province fell by 0.9% in 2017, capping the year at 5.5%.

Quebec had close numbers when it came to employment growth, provincially seeing a rise by 2.1%. The unemployment rate continues its two-year downward trend, falling to 4.9% at the end of the year.

Heading west, British Columbia finished the year with an employment growth rate of 3.4%, which is similar to that of 2016 according to Stats Canada. Unemployment rate there fell to 4.6%, the lowest among all provinces.

It was good news all around for employment in Canada.