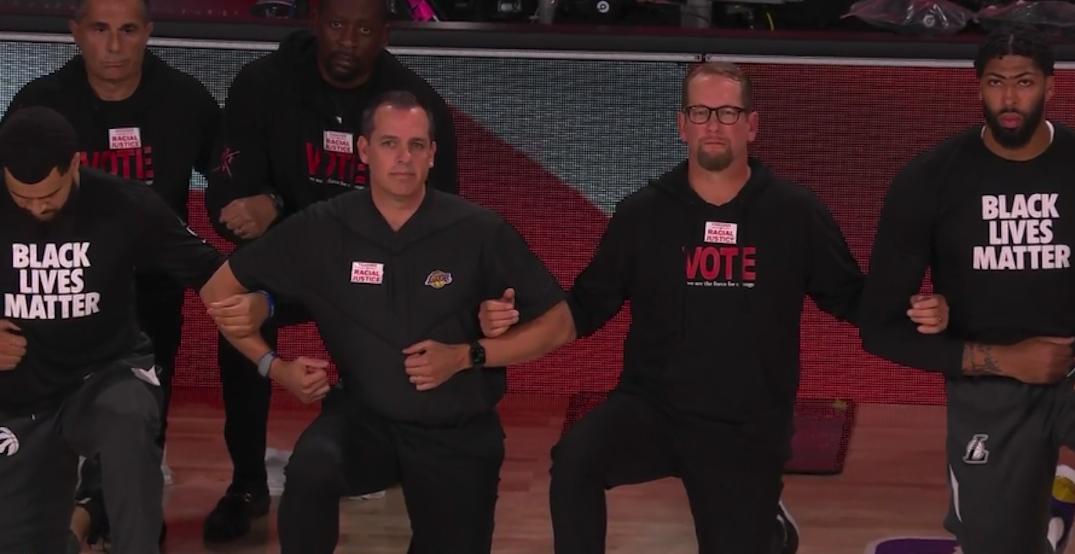 Toronto Raptors basketball has officially returned, but the focal point of the moment is something bigger than sport.

The world has changed quite a bit since the last time the reigning NBA champions took the floor for a regular season basketball game. Along with a global pandemic, an international anti-racism movement that’s pushing for social justice has stepped into the spotlight.

That movement was evident and the overall message was powerful as the Toronto Raptors resumed their 2019-20 season down in the ‘NBA bubble’ created in Orlando, Florida.

The Raptors squared off against LeBron James and the Los Angeles Lakers on Saturday night, earning a 107-92 statement victory, but a statement was made well before the score was final.

Prior to the players stepping on the floor, every Raptor player made the decision to sport a message across the backs of their jerseys in place of last names.

These messages included things like “Black Lives Matter,” “Justice,” and “Education Reform” – each one part of a pre-approved list established by the league and the NBA Players Association.

Ahead of tip-off on Saturday, the Raptors and Lakers kneeled for the duration of both the American and Canadian national anthems.

The @Raptors and @Lakers kneeled for both the American and Canadian national anthems ahead of tonight's game. #RapsOnSN | #BlackLivesMatter pic.twitter.com/rsDmr1WRW7

In a move of solidarity and togetherness, Raptors head coach Nick Nurse and Lakers head coach Frank Vogel switched places to kneel alongside the opposite team.

James, an American-born superstar, was also captured on the telecast singing along with the lyrics to ‘O Canada’ – another possible showing of a united front.

The combined anthems ran for around four minutes and, following the game, Raptors guard Kyle Lowry made it known what was running through his mind during that moment.

What an answer. Wow. pic.twitter.com/Dfs85jufeR

“I was on my knee for over four minutes and to think that a police officer could do that for eight minutes and 46 seconds…it’s a sad moment.” Lowry told Malika Andrews of ESPN.

Lowry went on to say that the team hopes to continue leveraging their platform and “raise awareness” to the ongoing social justice movement.

Now in addition to the bigger message on social justice being sent by the NBA and its players amid the restart, Toronto played a meaningful basketball game and Lowry…well he was nothing short of spectacular.

KLow went off for 33 points, a career-high 14 rebounds, and six assists.

To put Lowry’s monster stat line in perspective, the Lakers’ superstar duo of James and Anthony Davis – arguably two of the best players in the league – only combined for 34 points, 16 rebounds, and eight assists.

🙌 @Klow7 does it all in the @Raptors W over LAL! #WholeNewGame

Number 7 put the team on his shoulders, doing everything on both sides of the ball while also hitting the three that put the nail in the coffin when the score was 94-86 in favour of Toronto.

He had every reason to be in a dancing mood following a masterful performance.

Outside of Lowry it was OG Anunoby who stood out as one of the Raptors best players.

Despite having the tall task of guarding James throughout the game, Anunoby was sharp to the tune of 23 points, four rebounds and two steals.

Anunoby had his share of highlights as well, from clutch three balls to thunderous alley-oops.

Lowry spoke highly of his young teammate following the game, suggesting that Anunoby is “going to be really good in this league for a long time.”

Another man with praise for Toronto’s performance: LeBron himself.

“Great team. No if’s, and’s or but’s. Well-coached. Championship DNA…The media may not give them as much credit because Kawhi is gone, but players know what type of team they are,” King James told media during his post-game press conference.

It is important to note that the Raptors have won 11 straight against the Los Angeles, not having lost a game to the franchise since the 2014-15 season.

Toronto currently sits in second place in the Eastern Conference with seven games remaining on their bubble calendar before the 2020 playoffs officially start.