The Canucks beat the Tampa Bay Lightning last night, and once again we have the Sedins to thank. It was a team effort, of course, but Vancouver’s best players came up big again, combining forces on the winning goal.

That’s Henrik Sedin undressing Jason Garrison at the blueline, then taking a hit from Nikita Kucherov to feed his brother Daniel, who lets go a perfectly placed bullet of a shot.

As the Canucks reach the Christmas break, just six games away from the midway point of the season, a lot of people will begin giving their pick for Canucks MVP. A lot of people will try to look outside of the box for this award, and I’ve done it too.

No Kesler = No Canuck Powerplay. Guy is the MVP #HNIC #canucks

Personally I think Hansen might be team's MVP so far, with the way he props up whoever he plays with. #Canucks

You know what? We get it wrong almost every year.

I know it’s boring to say the Sedins are the MVPs of the Canucks, but picking any other player on the team is usually a farce.

Last year, Radim Vrbata was the Canucks’ only representative at the All-Star Game, and was named team MVP at the end of the regular season. He had a good year, leading the team with 31 goals, so this isn’t an attack on Vrbata.

This happens nearly every season.

The Sedins have had the two best careers in Canucks history. They are 1-2 in franchise points and have finished 1-2 in scoring for 9 straight seasons. 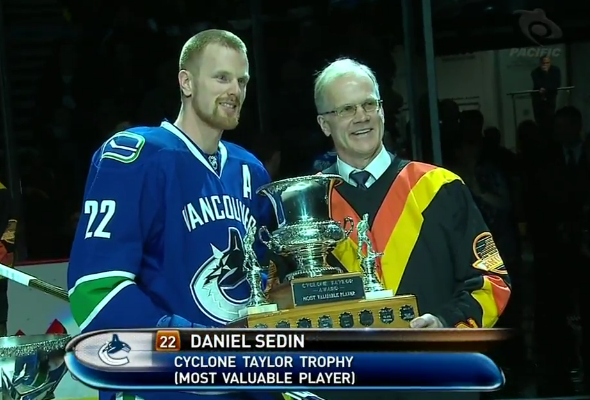 How many Cyclone Taylor Awards (team MVP) do they have? Collectively, just three. Henrik won the trophy in 2010 and 2012, while Daniel won it in 2011. Basically they have to win an Art Ross Trophy to get noticed.

Here’s the history of the award:

Markus Naslund won this award 5 times. They didn’t give the award to Todd Bertuzzi, Mattias Ohlund, or Ed Jovanovski to spice things up.

I mean, Daniel Sedin is about to become the team’s all-time leading goal scorer and he has the same number of team MVP awards as Mark Messier and Alex Auld! Hey, maybe one day Henrik Sedin will equal the number of MVP awards as Orland Kurtenbach!

So I get it, you want to look outside of the box. You want to give the MVP to Anson Carter, Jarkko Ruutu, or Kyle Wellwood. But let’s be real.

And do it every year.