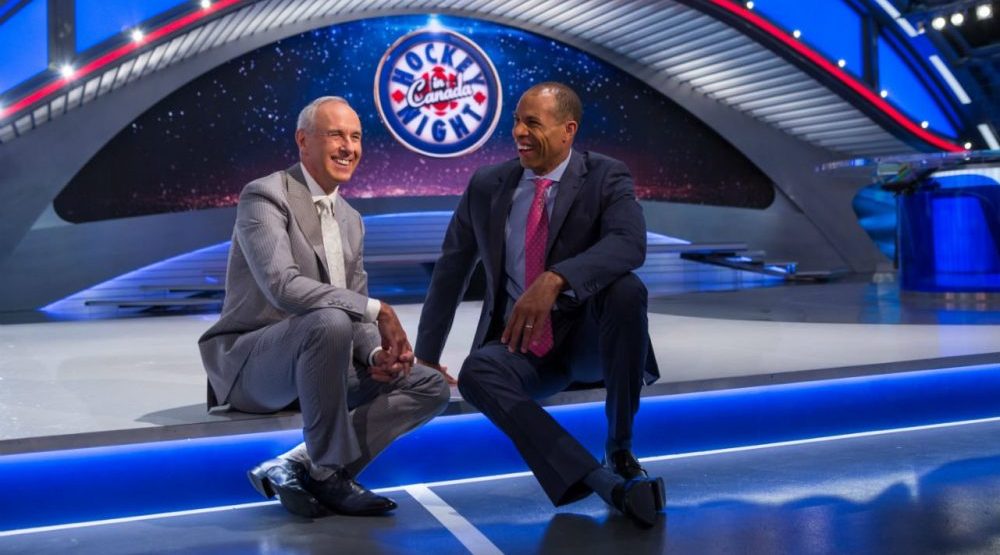 Just over a week after we learned that George Stroumboulopoulos would not return as host of Hockey Night in Canada, Sportsnet has made it official. And it appears that move was just the tip of the iceberg.

Ron MacLean will return as the host of the early game, while David Amber, who has been with Hockey Night in Canada for the past five years, gets promoted to host of the second half of the double header. MacLean will hop on a plane to all corners of the country 24 times again this year, as he remains on as host of Hometown Hockey on Sundays.

“The impact Ron has had on the game and in communities across the country is immeasurable. Hockey fans, young and old, have a deep connection with him,” said Scott Moore, President of Sportsnet & NHL Properties, Rogers in a media release.

MacLean, of course, was the long-time host of Hockey Night in Canada before being replaced by Stroumboulopoulos two years ago.

The Sportsnet release states that Stroumboulopoulos will “depart the company to explore new creative opportunities”.

“George is an extremely versatile and creative broadcaster and we value the contributions he made to Hockey Night in Canada. We look forward to seeing what his next great project will be,” said Moore. “We are continually evaluating and evolving our broadcasts to deliver the best experience for fans.”

David Shoalts of the Globe and Mail reports that Sportsnet, who now control Hockey Night, will be making a number of cuts.

Glenn Healy gone. Was told it was for financial reasons source says.

The biggest name gone (after Strombo) is Glenn Healy, who has been broadcasting for many years since retiring from the NHL as a player in 2001. Healy, a polarizing broadcaster for fans, was the between the benches analyst with Jim Hughson and Craig Simpson on Hockey Night in Canada’s top broadcasting team. Expect Hughson and Simpson to broadcast as a two-man unit going forward, as Sportsnet tries to cut costs.

But the cuts don’t stop there.

PJ Stock, a long time member of the Hockey Night studio crew has been let go, along with Corey Hirsch, Billy Jaffe, and Chantal Desjardins, who were mainly part of Sportsnet regional broadcasts.

Last year was a difficult one for Sportsnet’s bottom line, as all seven Canadian teams missed the playoffs. Not only did that hurt ratings during the season, as fans grew disinterested with their terrible teams, it hurt ratings in the playoffs as well, where fans traditionally jump on the bandwagon of “Canada’s team”.