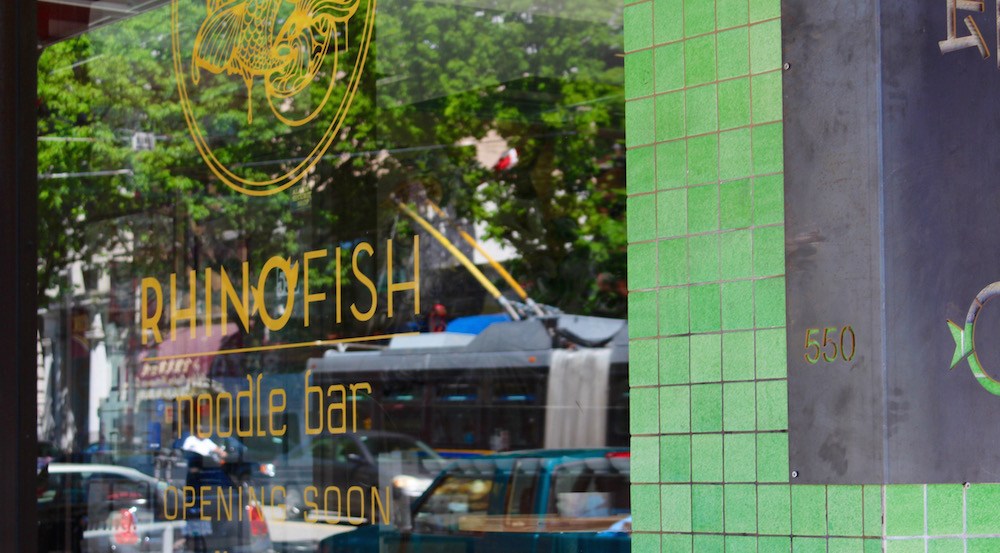 The shop at the north-east corner of Main and Keefer in Chinatown has been around a long time, and has been known in its storied past as many things to many people. After several months of the windows being papered over and a flurry of work inside, a new identity has emerged: Rhinofish Noodle Bar.

The building’s signature green tiles might catch your eye from outside, but inside the bright room it’s hard not to focus on the evocative artwork and the aromas of Taiwanese beef noodle soup–and other eats–in the works. 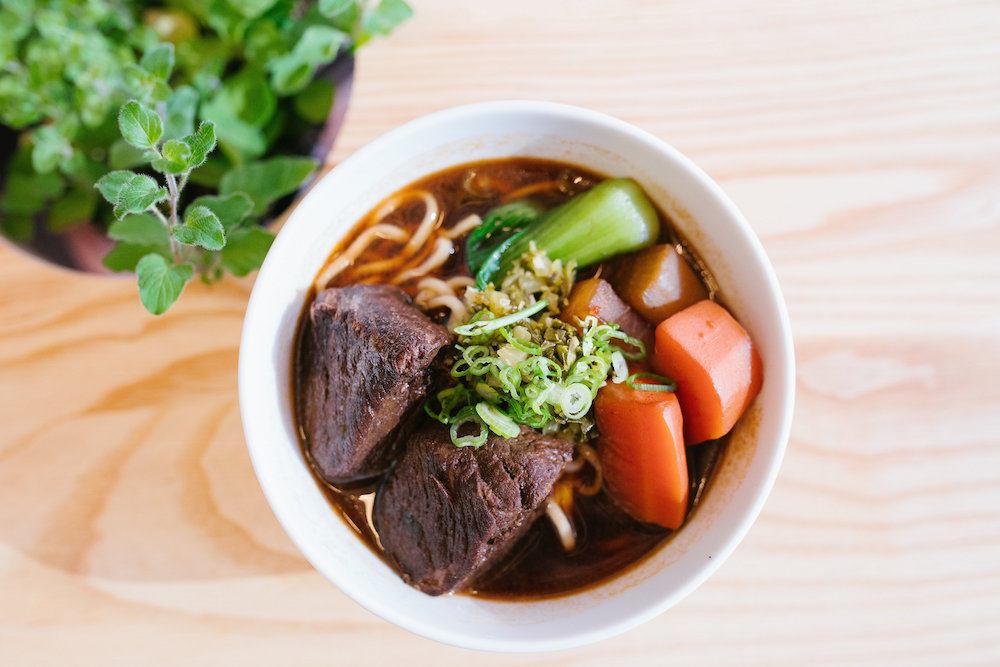 Rhinofish is the first restaurant venture for Vancouver chef David Wu. The PICA grad has done time in restaurants in Kerrisdale, West Vancouver, and downtown, spanning cuisines from Italian to Japanese, however he wanted most to express his heritage in a beloved family dish, Taiwanese beef noodle soup, or niu rou mian.

Wu says his love of cooking goes back to his childhood, helping prepare New Year’s feasts for extended family gatherings of up to 5o relatives. But the staple food for Rhinofish is the noodle soup, which Wu says varies from region to region, and from family to family. 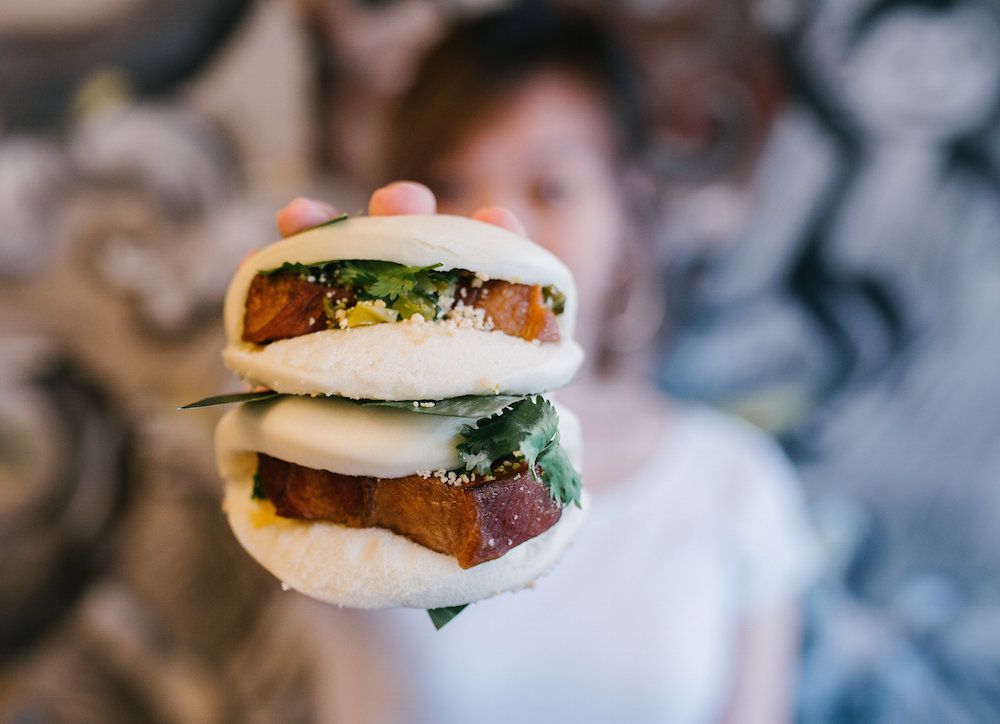 Even Wu’s version–which, sadly, when I came to chat with him, wasn’t available for tasting–comes with his own twists and culinary stamp. He breaks from some of the dish’s tradition in his use of red wine rather than rice wine, and a vegetable stock for a base, both which he claims lends the soup a richer, different flavour than what others may recognize.

The minimalist menu also includes other noodle soups, rice bowls, and small bites, like Wu’s take on the Taiwanese snack staple popcorn chicken nuggets. Since this is Vancouver’s Chinatown in 2017, you’ll find them on the menu here served with parmesan and truffle oil. And of course there are local craft brews to go with your noodles and Taiwanese eats. 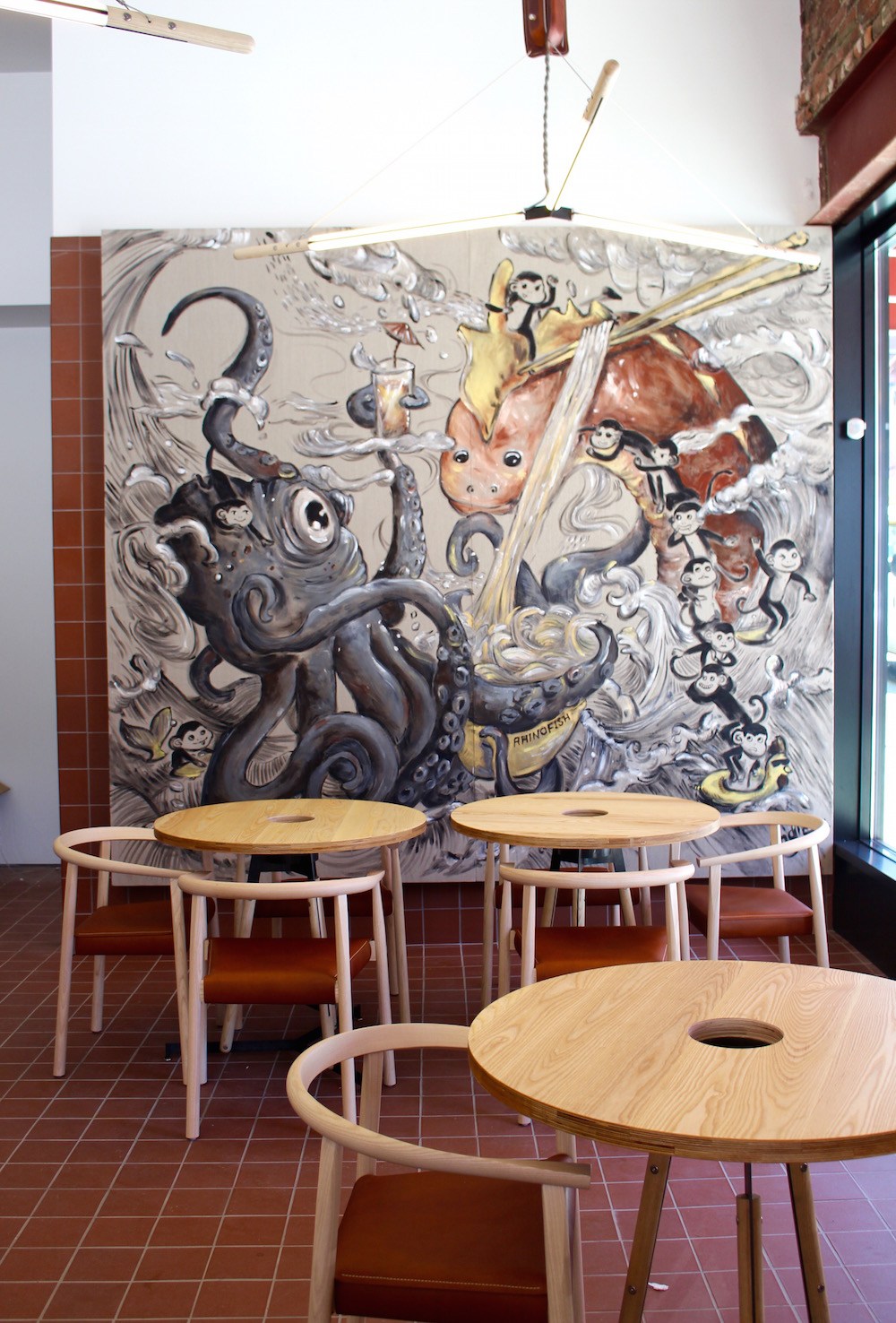 Rhinofish’s design and decor is also full of backstory, much like the food they serve. Wu points out that the round tables–even the ones that just seat two guests–follow the tradition of having round tables for gatherings, where the food unites people and brings them together. Scott & Scott get the design nod.

Similarly, the custom mural art, done by Wu’s high school friend who came over from Taiwan to do the work, showcases her signature monkeys, but also a giraffe speaking the words that translate to “have you eaten?” 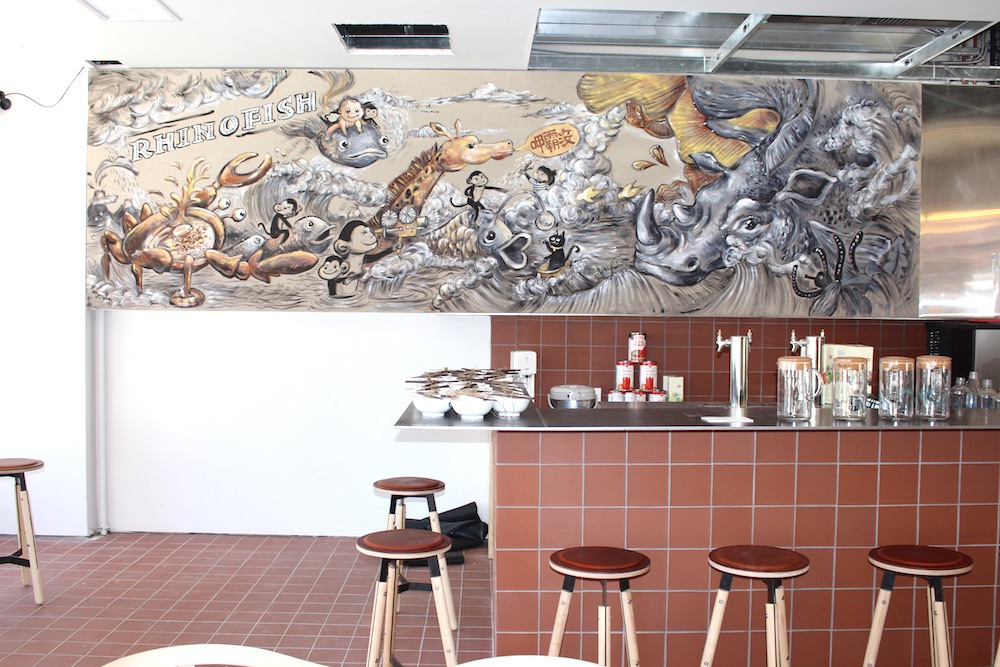 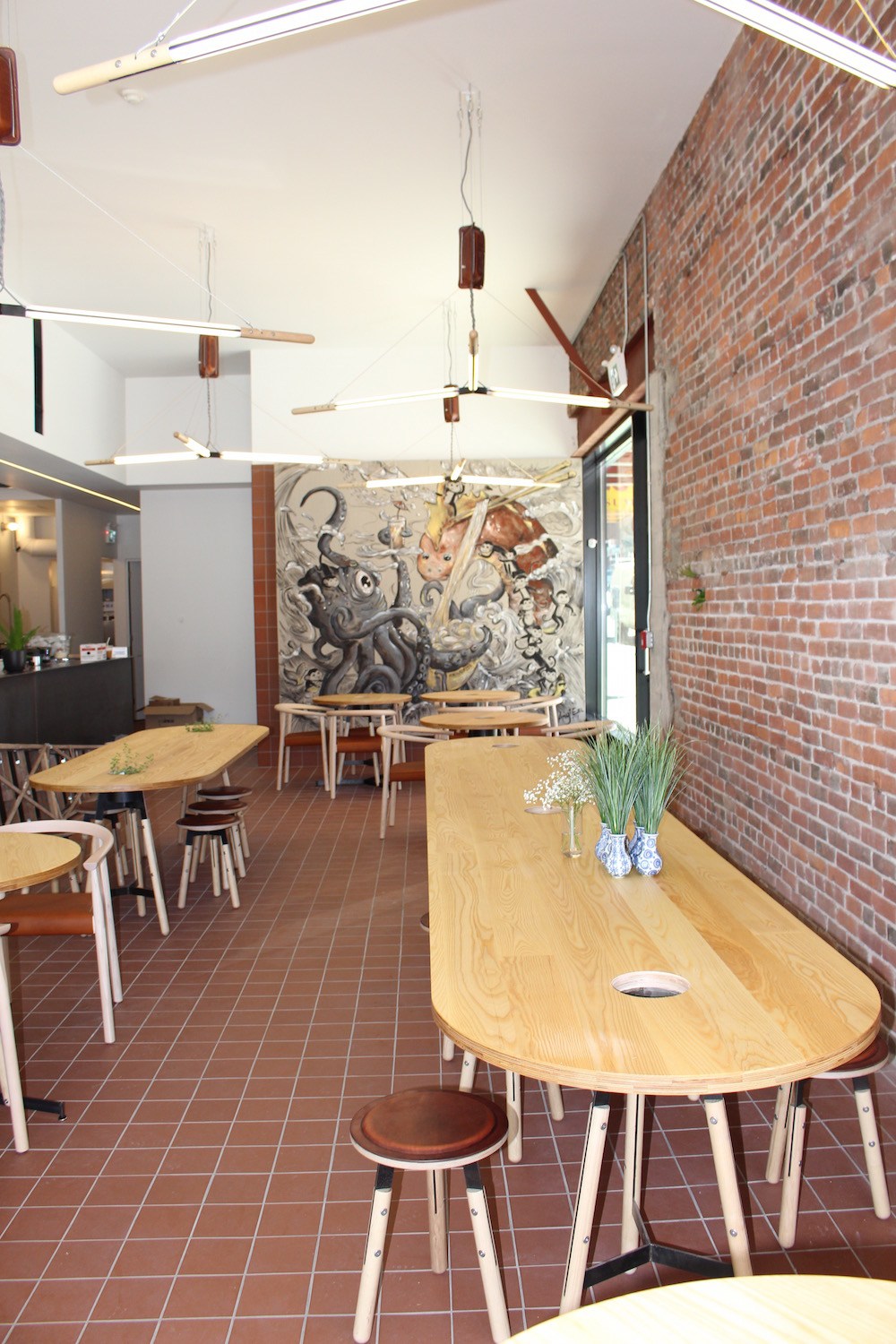 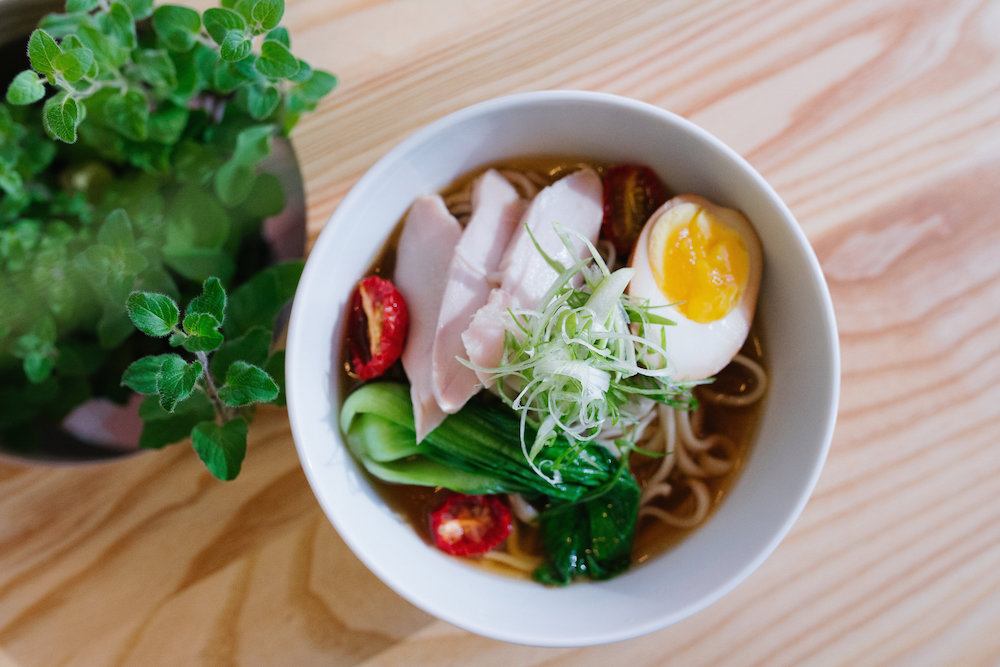 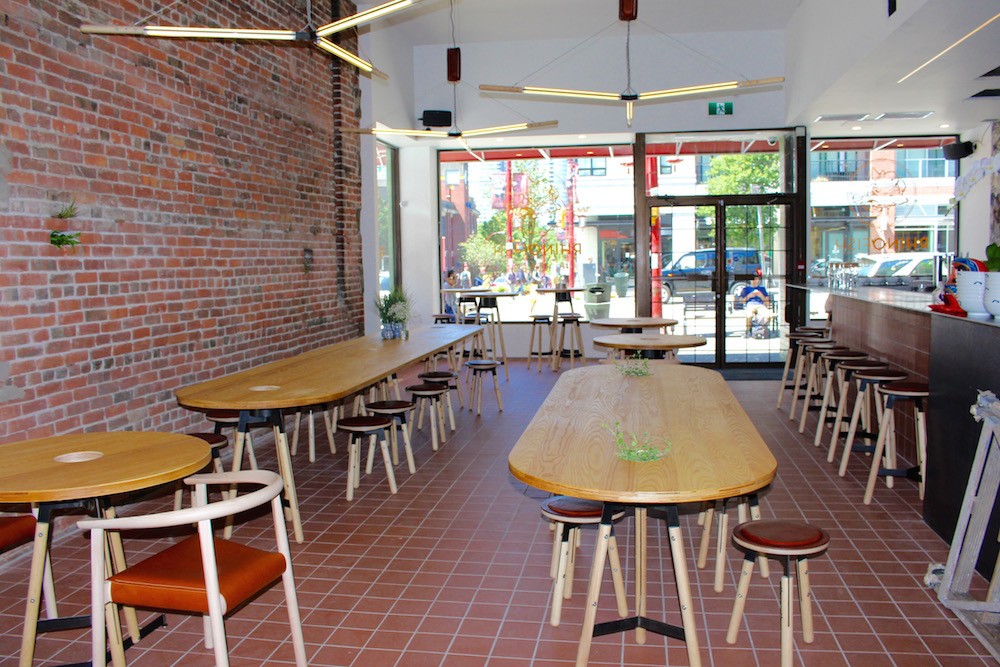