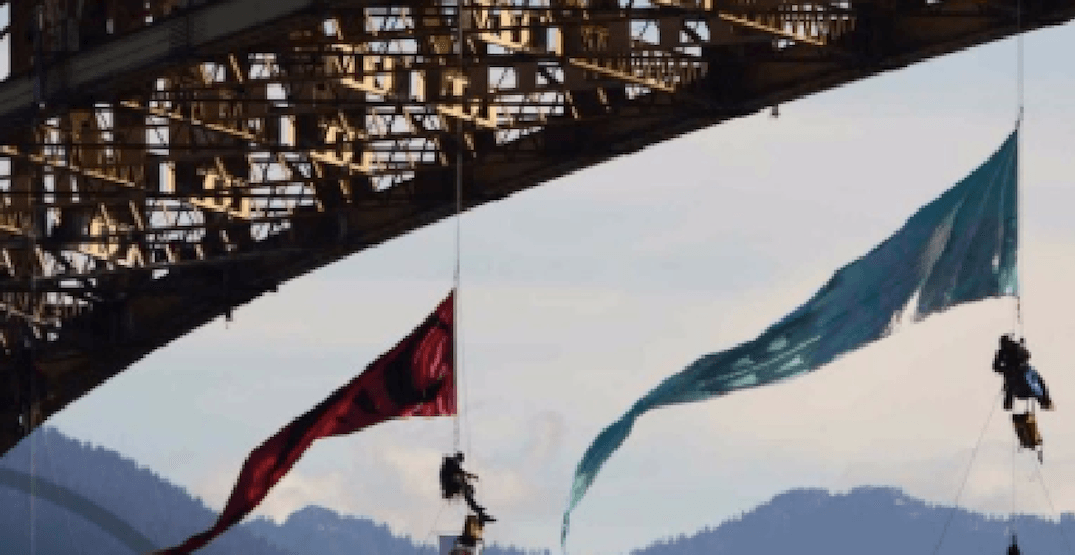 In a move they said was done to prevent an oil tanker from being able to leave the Trans Mountain Terminal in Burnaby, 7 people formed what they called an ‘aerial blockade’ off the side of the Ironworkers Memorial Bridge on Tuesday morning, while another fiver lingered on the catwalk of the bridge, in protest.

Greenpeace claimed responsibility for the stunt, tweeting a photo of the incident, and stating the climbers were doing a “brave and beautiful” thing.

These climbers are doing a brave and beautiful thing!
Send them your support and tell the dirty dozen banks it’s time to #StopPipelineshttps://t.co/eUhuxcd9h6 pic.twitter.com/U6kAxlWTBT

“The climbers are in the path of the tar sands oil tanker, Serene Sea, which is currently docked at the terminal,” said Greenpeace in a statement. “The tanker was scheduled to leave port this morning but is now being blocked from leaving by the climbers.”

Vancouver Police Const. Jason Doucette told Daily Hive the incident began just before 7:30 am, when police received a report of “a number of people” rappelling from the bridge.

“Officers from the VPD’s Marine Unit are on scene assessing the situation,” said Doucette. “Public safety, including the safety of the protestors and our officers, is our priority.

As of 9:50 am, he added, “there is no disruption to vehicle traffic on the bridge.”