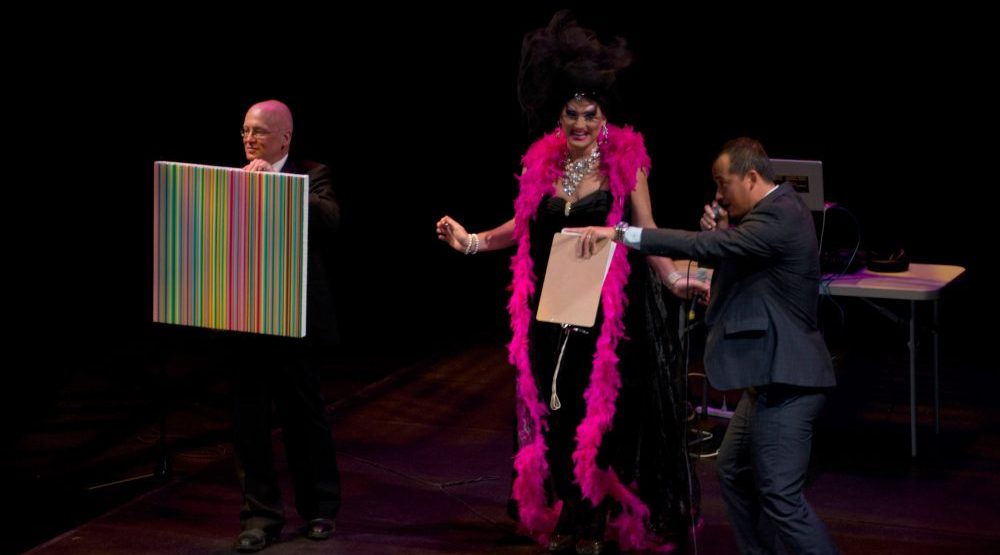 This past Saturday, Out On Screen, the non-profit organization behind the Vancouver Queer Film Festival, hosted its 14th annual fall gala. Held on the Goldcorp Stage at the BMO Theatre Centre, the event featured sassy drag performances from Isolde N. Barron and Adam Zapple.

Proceeds from the event will benefit Out On Screen’s youth program, Out In Schools, which supports LGBTQ2+ youth through the sharing of queer films and meaningful discussions in classrooms. Last year’s fall gala raised $60,000 and it’s expected that this year’s total will be even more fabulous.

“We have students in places like Dawson Creek, Terrace and the Sunshine Coast who aren’t able to be out or who don’t have vibrant queer communities,” said Stephanie Goodwin, Executive Director of Out On Screen. “I firmly believe we can change lives one person at a time. But in order to do that, we have to be able to get to those places.”

Goodwin noted that since the amendment to include gender identity and expression in the BC Human Rights Code, interest in Out In Schools has skyrocketed. Over nine schools throughout BC have already requested visits from Out In Schools for this academic year, up from an average of two requests in past years.

One of the highlights of the evening was the exciting art auction which featured artwork from Dina Goldstein, entitled White Series #1. Three years ago, Goldstein was awarded the prestigious Most Important Female Photographer by Prix Virigina. The piece ended up going for $5000, at twice the gallery’s asking price.

Coinciding with the launch of a new progressive day for Vancouver, City Counsellor Melissa De Genova was on hand to officially declare the inauguration of Come Out Come Out Whoever You Are Day.

“The City of Vancouver has demonstrated a long-standing commitment to enriching the lives of lesbian, bi-sexual, transgender and queer communities,” proclaimed De Genova. “Come Out Come Out Whoever You Are is an outstanding initiative to celebrate diversity and equality, and showcase the achievement of queer artists.”