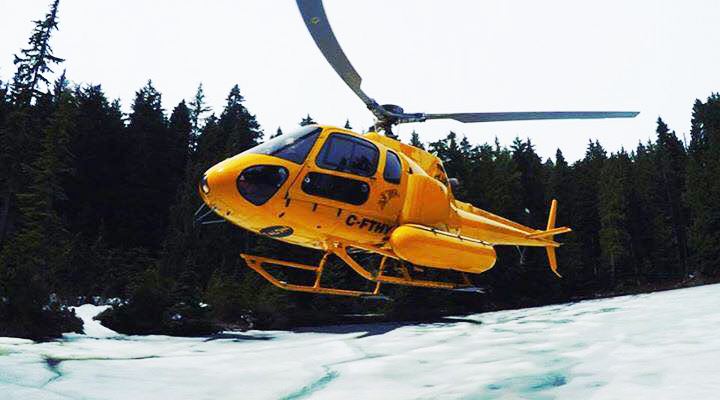 North Shore Rescue have had a busy long weekend, saving an adventurous snowboarder, a well-prepared hiker, and two young women who were not expecting snow.

“It turned out 40 or 50 people on the summit of First Pump Peak on Seymour had set up a big jump for snowboarding aerial practice,” Danks told Daily Hive by phone.

“They had a really nice setup there, a beautiful view, and they were each taking turns doing jumps.” 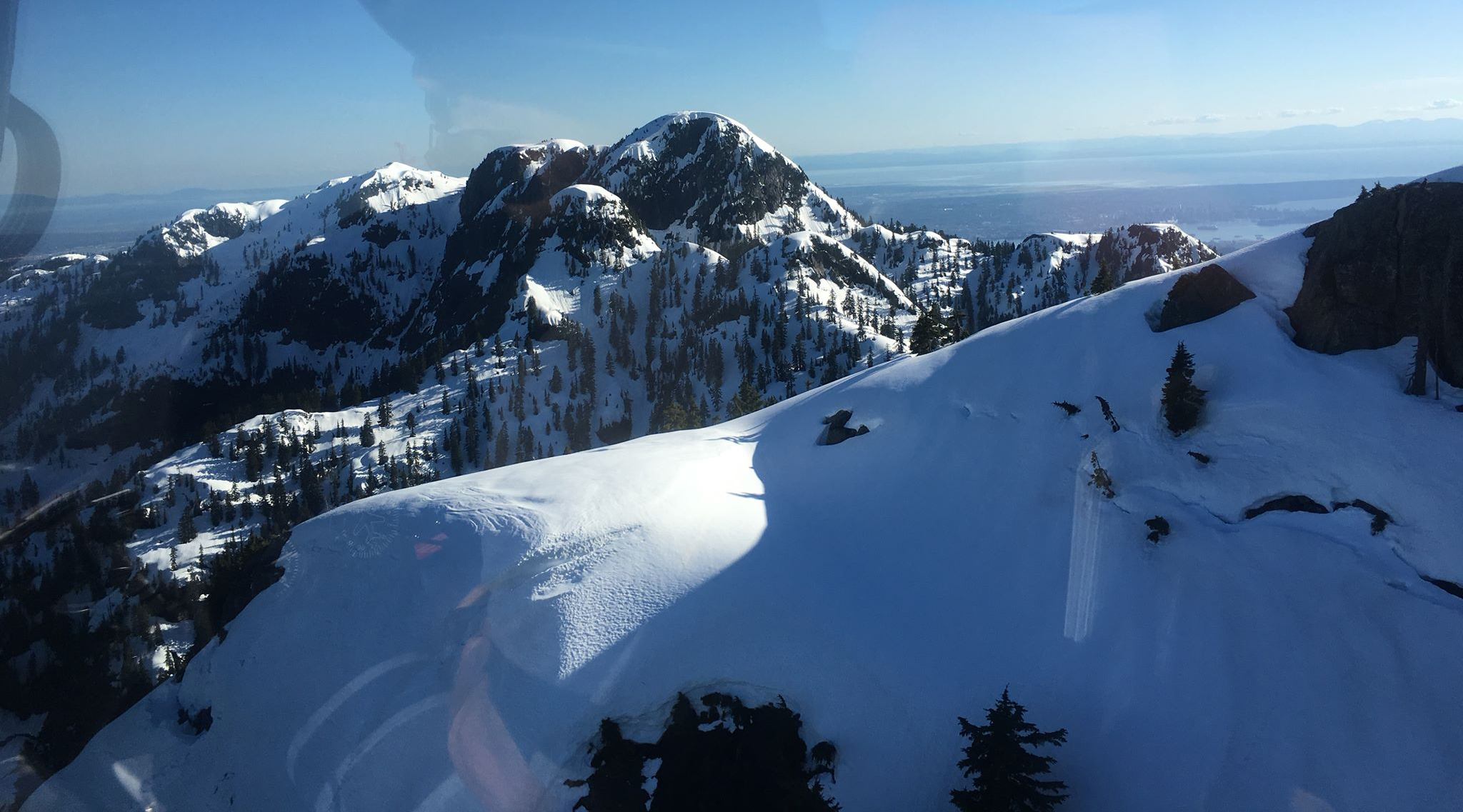 The view from the NSR helicopter during their rescue on Mt. Seymour (North Shore Rescue/Facebook)

According to Danks, the man went for the jump, but got too much air and landed flat on his back. His friends called for help and NSR sent in a ground and air response.

“The people who were there did a great job, they immobilized him right away, kept him off the snow, and made our job pretty easy,’ said Danks.

The ground team were able to bring him down to the parking lot, where they were met by an ambulance. The man was taken straight to hospital.

“[The snowboarders] weren’t doing anything wrong, these accidents happen,” said Danks. However, he said, the man “does have a significant injury.” 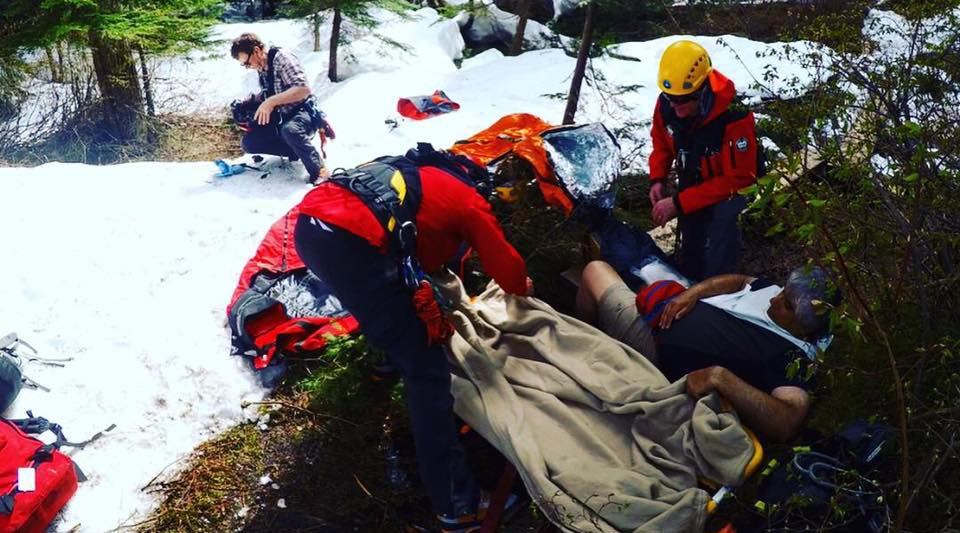 On Sunday, the NSR got a call from Brothers Creek on Hollyburn Mountain, where a 60-year-old man had got stuck in snow.

“Unfortunately, he was treading on some snow that was melting underneath and he ended up falling through up to his knee and pivoting forward on his knee,” said Danks.

“It just basically blew his knee out right there and he was not able to walk.”

Rescuers had to long line the man 150 feet underneath the helicopter to the NSR’s station, so as not to aggravate his injury. He was then transported to hospital. 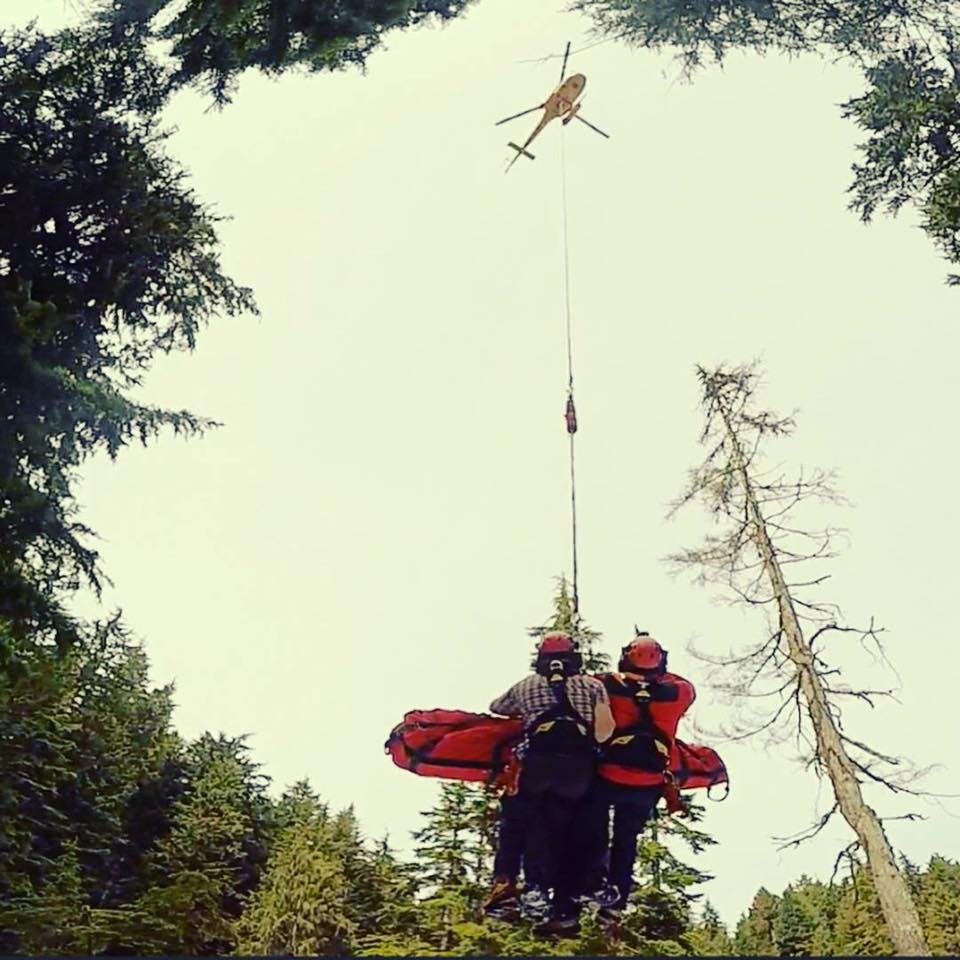 Danks says the man was very well prepared, but didn’t realize what was underfoot.

“He had a bunch of extra equipment with him, crampons, you name it,” said Danks. “He was stepping on what he thought was solid snow, but in fact it was hollow underneath.”

Danks is warning spring hikers to be wary of snowpacks like that.

“It’s a really common thing to get with water that runs below and bascailly melts all the snow,” said Danks.

“You’re actually walking on a thin layer of snow that looks like a bridge but there’s nothing underneath.” 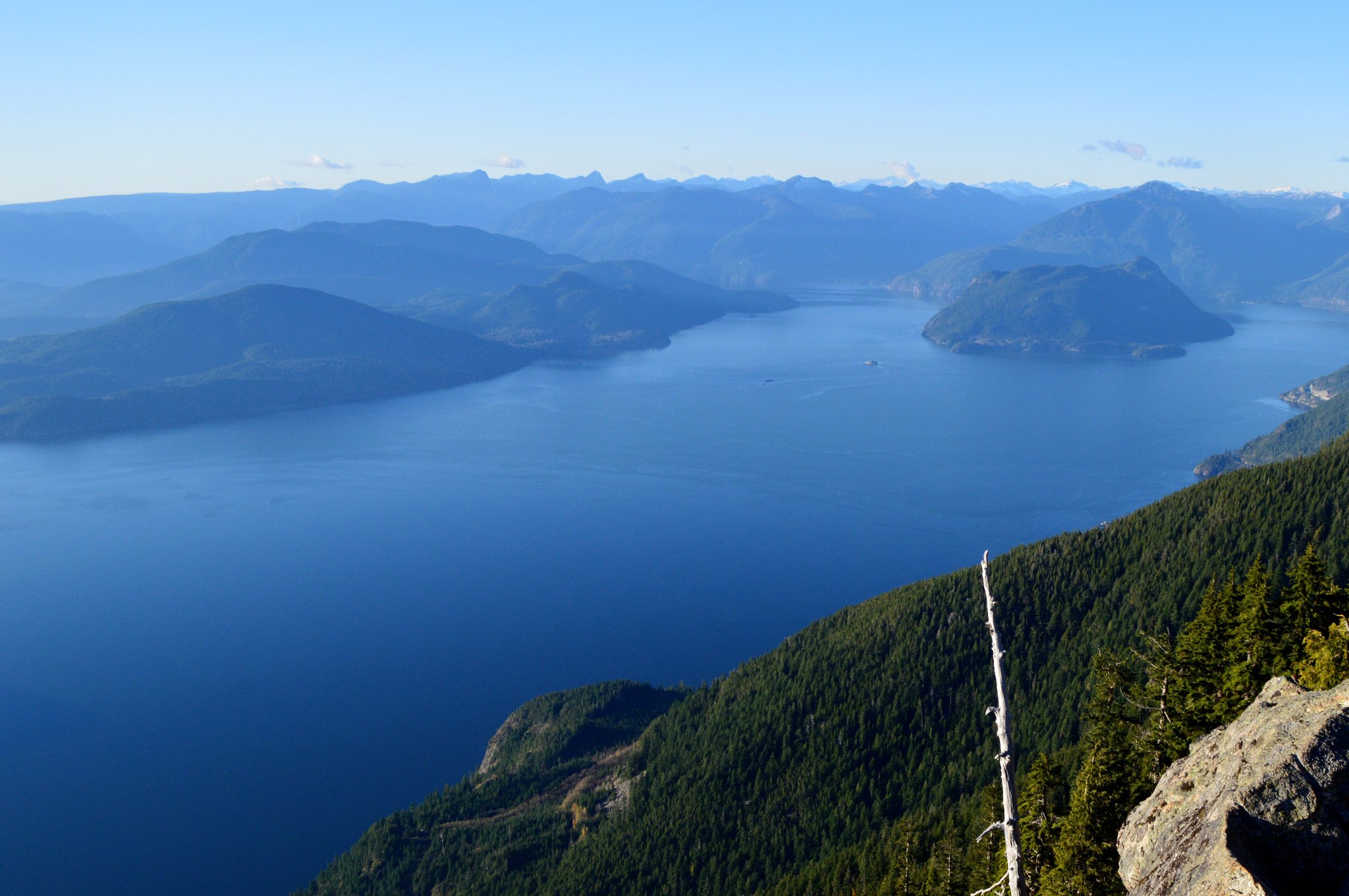 Meanwhile, on Monday, two young women were stranded on the trail to St. Mark’s Summit in Cypress Provincial Park and called 9-1-1 for help.

Unfortunately, so did everyone else.

“We also had a number of other 9-1-1 calls, saying that someone had fallen off the cliff as well,” said Danks.

“But it turns out all these calls were passersby who were trying to be helpful, but were also getting pretty excited at the same time. We kept getting drunk 9-1-1 calls.”

Danks said the NSR managed to get to the women about an hour and a half later, where they were found hypothermic, sitting on the snow.

“These two ladies just got in over their heads. The hike they were going on was a bit too steep for them and they weren’t prepared for the snow,” said Danks.

“They really panicked when they weren’t able to go up or down. They actually sat down on the snow to stay safe, but in doing so became hypothermic on a beautiful day like today.”

Rescuers escorted the two women off the hill, but the pair weren’t injured, said Danks.

“The two females had no business being in the area they were hiking,” said Danks. “They were not injured, just completely overwhelmed by the terrain.”

Dans is urging hikers to look out for each other on the trails this spring.

“We’ve seen tonnes of people out there. Some are very prepared, others are not.”

“If you meet some people who are clearly not prepared for the conditions at hand, check in with them and give them some friendly advice.