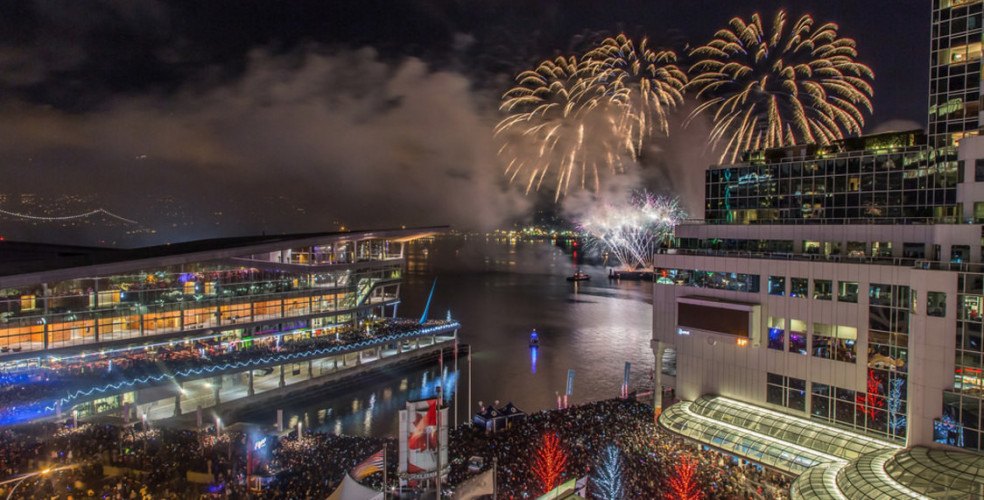 An estimated 80,000 packed Canada Place and Coal Harbour for the first ever free, public New Year’s Eve celebration event in more than a decade. The figure is the official total provided by the Vancouver Police Department.

This was also the largest free New Year’s Eve event in Canada in terms of attendance, beating Toronto’s Nathan Phillips Square attendance of 30,000 and Montreal’s Old Port attendance of 72,000.

The Vancouver event began at 6 pm and consisted of a free concert, activities, food trucks, and two fireworks displays launched from a barge in Coal Harbour – a three-minute 9 pm Early Eve show for families with young kids and an 11-minute midnight finale to properly ring in 2016.

“Bringing this level of New Year’s Eve event back to Vancouver, we knew people would be excited, but the turnout and support we received from all levels of the community was truly overwhelming,” said Charles Gauthier, president of the Vancouver New Year’s Eve Celebration Society.

“The success of the event confirms that Vancouverites are ready to celebrate the New Year with an event that compliments the calibre of our world class city.”

The initiative to return the New Year’s Eve tradition began more than three years ago, and it will return again at the end of this year on December 31, 2016 to count down the arrival of 2017.

“A lot of planning went into bringing this event to life,” Gauthier added. “We could not have had such a successful evening without the help of [Daily Hive, formerly Vancity Buzz], The Downtown Vancouver Business Improvement Association, Port Metro Vancouver, Tourism Vancouver, Concord Pacific, the City of Vancouver, 102.7 The PEAK, Westpark, CF Pacific Centre, our partners and volunteers.”

“We look forward to keeping this an annual tradition and transforming Vancouver’s New Year’s Eve into an international attraction.”