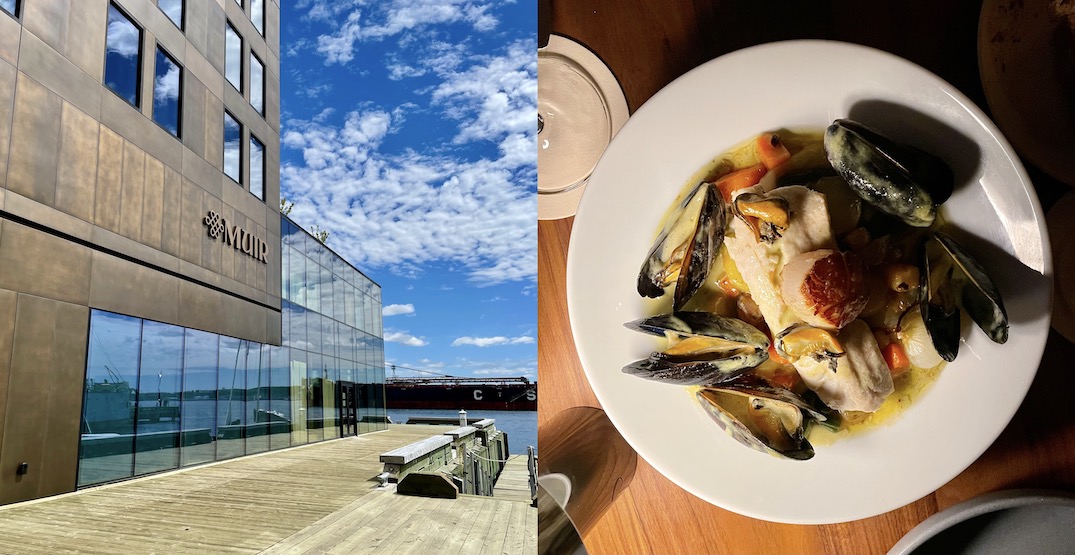 Halifax, Nova Scotia has always been an exceptional place to eat, drink, and play, but one new property has significantly upped the ante when it comes to wining and dining in the charming Maritime city: the Muir Hotel.

Located in the heart of downtown Halifax on the edge of the harbour, Muir offers an elevated hospitality experience and a taste of distinctly Nova Scotian cuisine too, something that’s been delighting both visitors and locals since it officially opened its doors in December 2021. 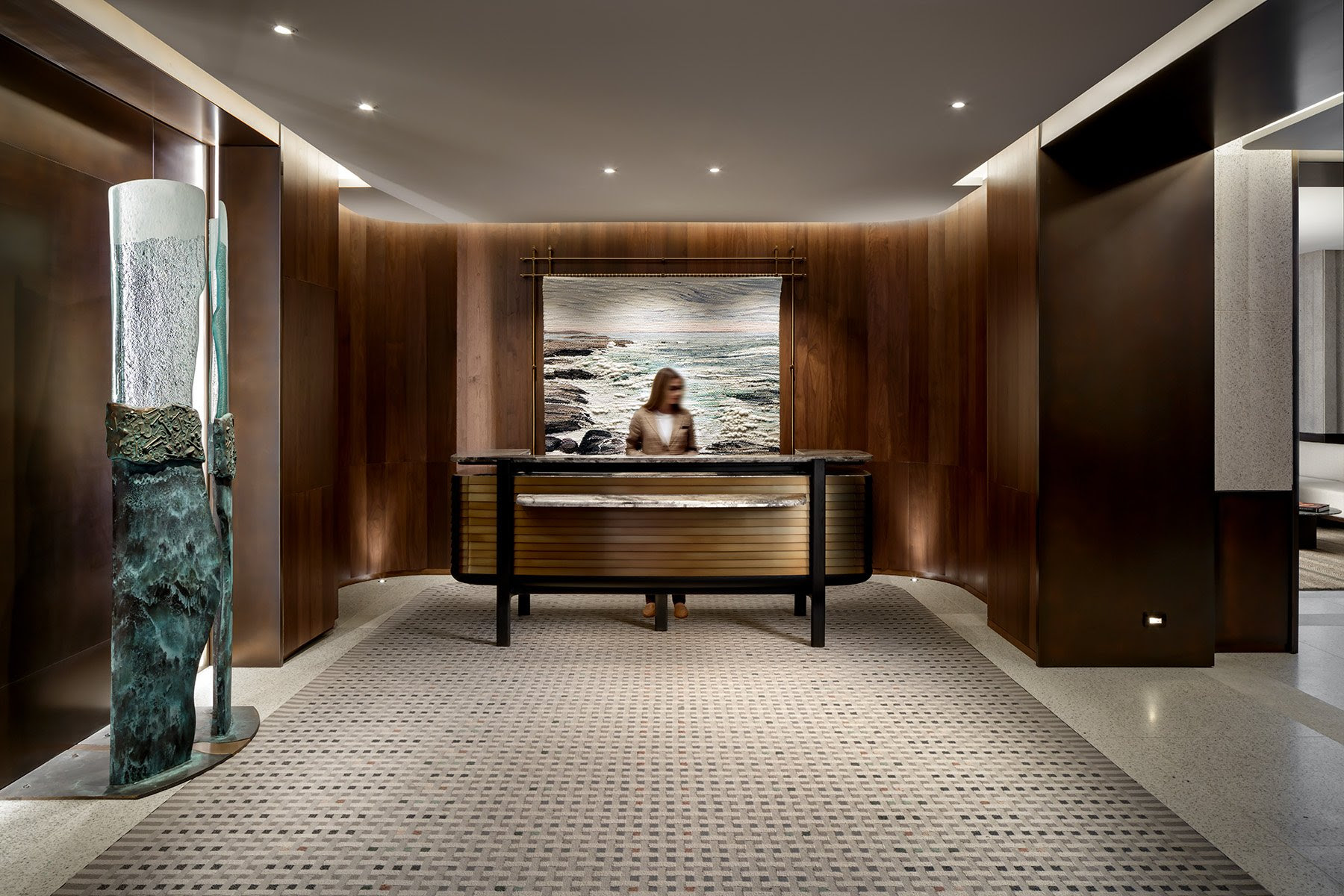 A part of the highly regarded luxury group of hotels, the Autograph Collection, Muir Halifax boasts 109 rooms inspired by the sleek, rounded features and elements you’d find on a beautifully-crafted sea vessel.

This destination is also Halifax’s first five-star hotel. The architecture was done by MacKay-Lyons Sweetapple Architects and the interior design was executed by Studio Munge. 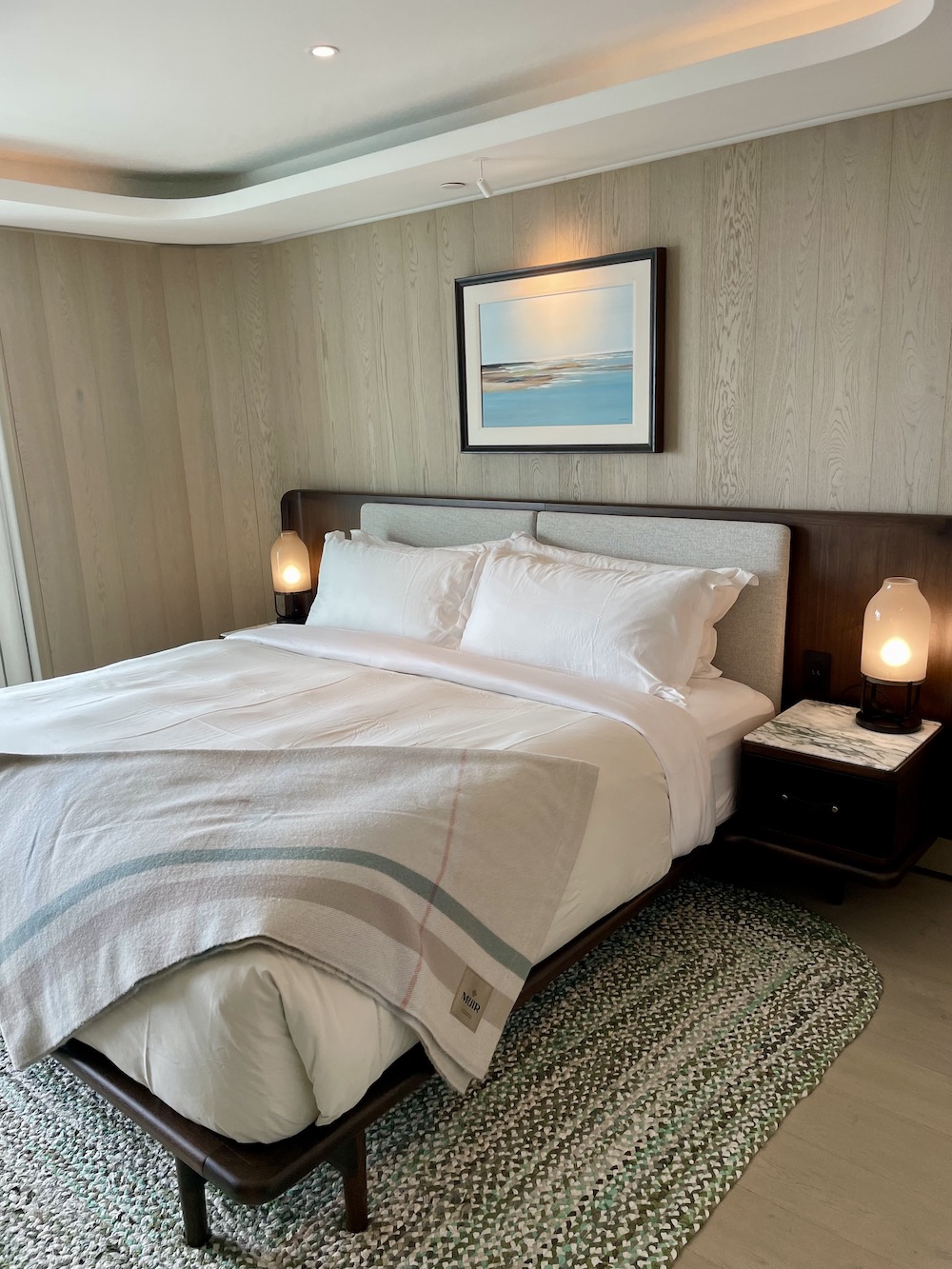 Here, guests can expect made-in-Canada furniture and original Nova Scotia art dotted all around the property along with an abundance of that famous regional kindness and friendliness from staff.

In addition to the bright and beautiful rooms with awesome views, Muir offers folks a state-of-the-art fitness centre (including a spin room), a vitality spa pool and cold plunge pool, a halotherapy salt room, infrared sauna, and even a eucalyptus steam room when it comes to amenities. 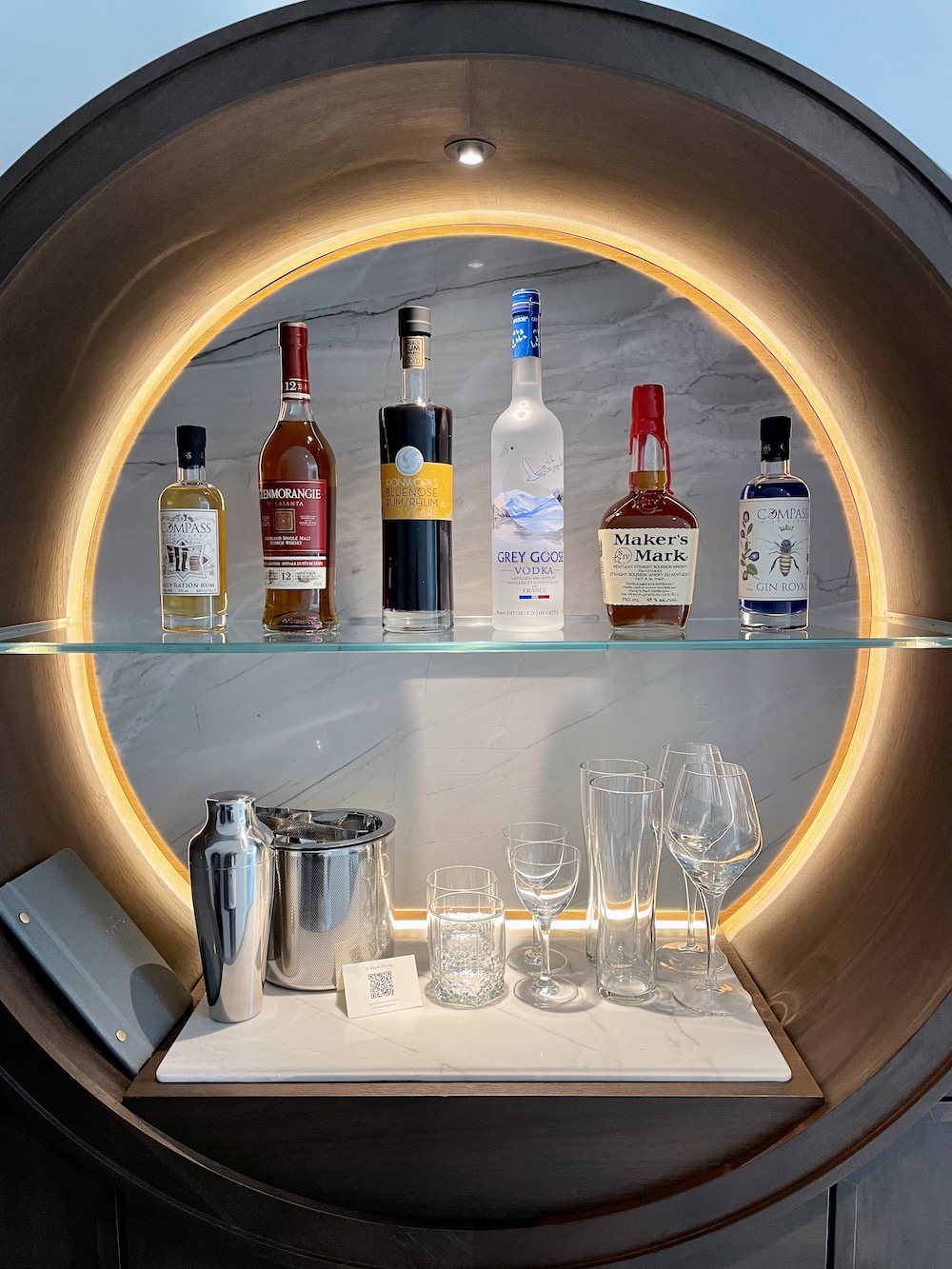 Once you peel your eyes off the Aesop bath products, rain shower, Nespresso coffee machine, and ultra-stocked in-room bars, outside the walls of the downtown destination there’s more to discover from Muir.

This includes complimentary kayaks, paddleboards, and bicycles, as well as access to the hotel and residence’s yacht and motorboat.

You read that right. Little Wing, a 36-foot Morris yacht, can be booked for excursions and tours around the historic harbour to get the ultimate view of Halifax’s coastline. 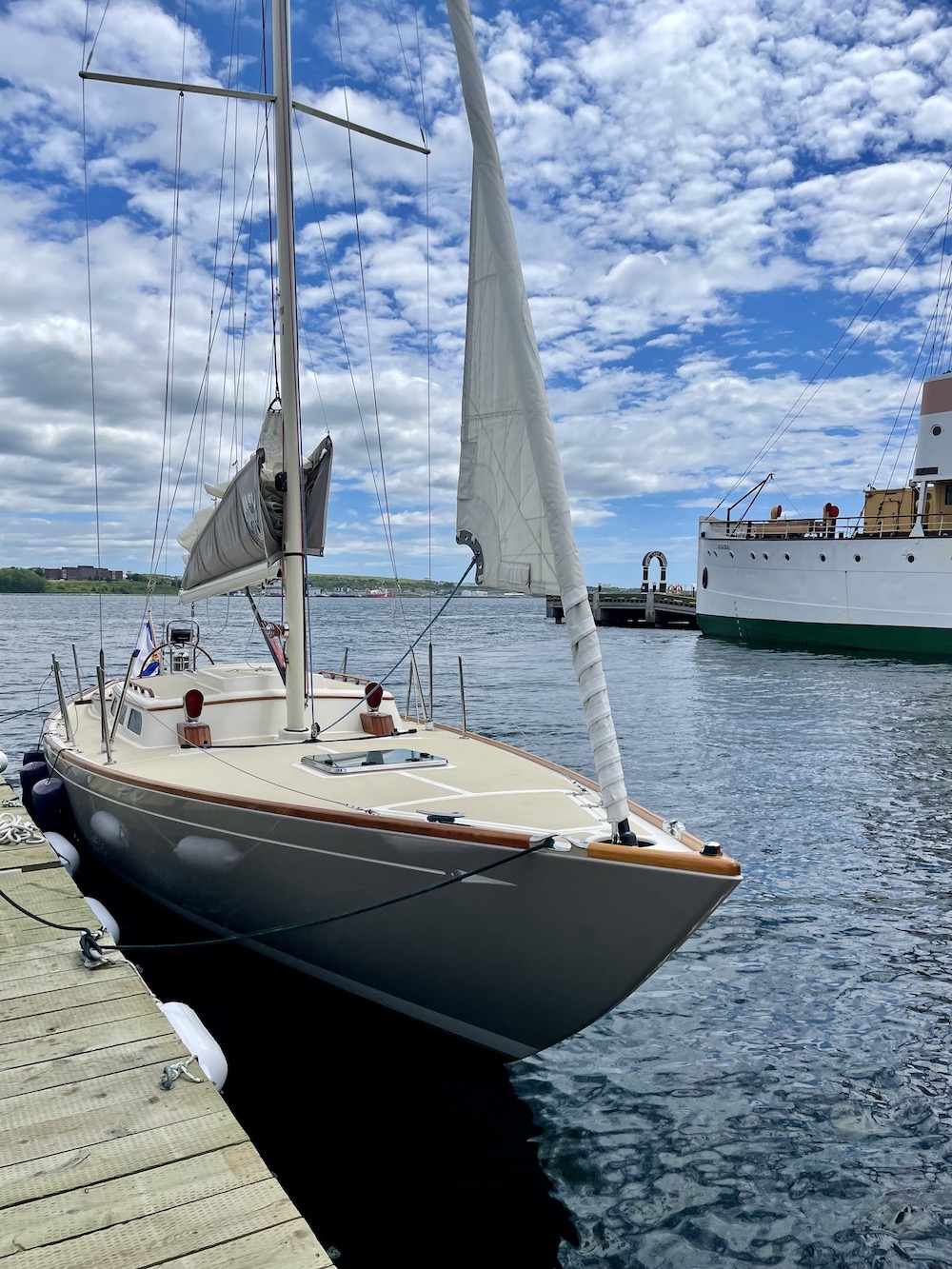 In case you’re aiming to head to another part of the city, you can easily snag ground transportation at Muir, as there’s a car and driver service at guests’ disposal as well.

But if we’re being honest, soon there won’t be too many reasons to leave Muir and its surrounding area, at least, if you’re a foodie that is.

Muir is actually the centrepiece of Queen’s Marque, a new waterfront district conceived, developed, and operated by The Armour Group Limited.

This area is known historically as Queen’s Landing and it features 75,000 sq ft of accessible public space, stunning art installations, shopping, and our favourite, restaurants.

Some of those restaurants — locavore-forward Drift and “sub rosa” speakeasy BKS — are onsite dining options at Muir. 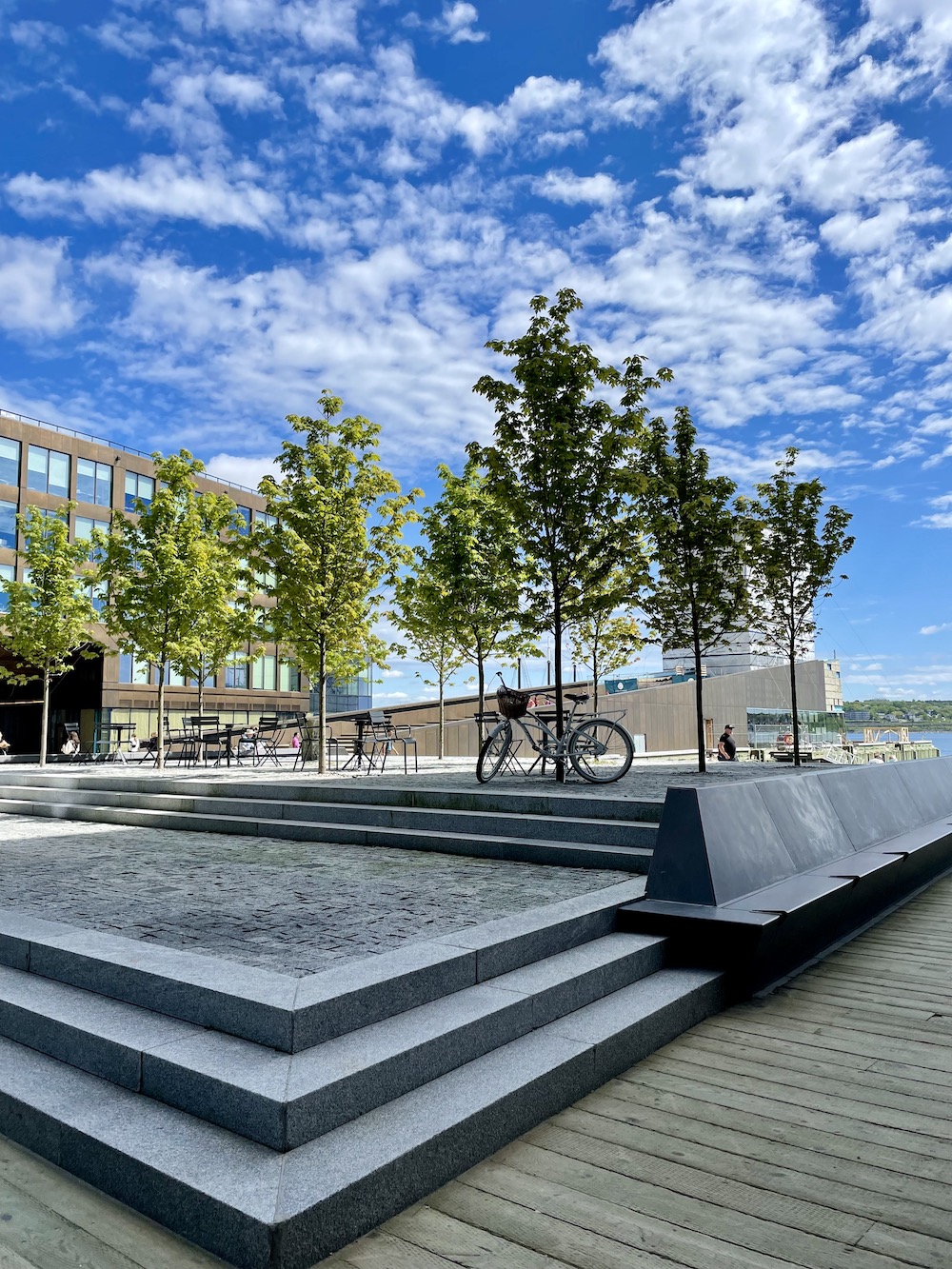 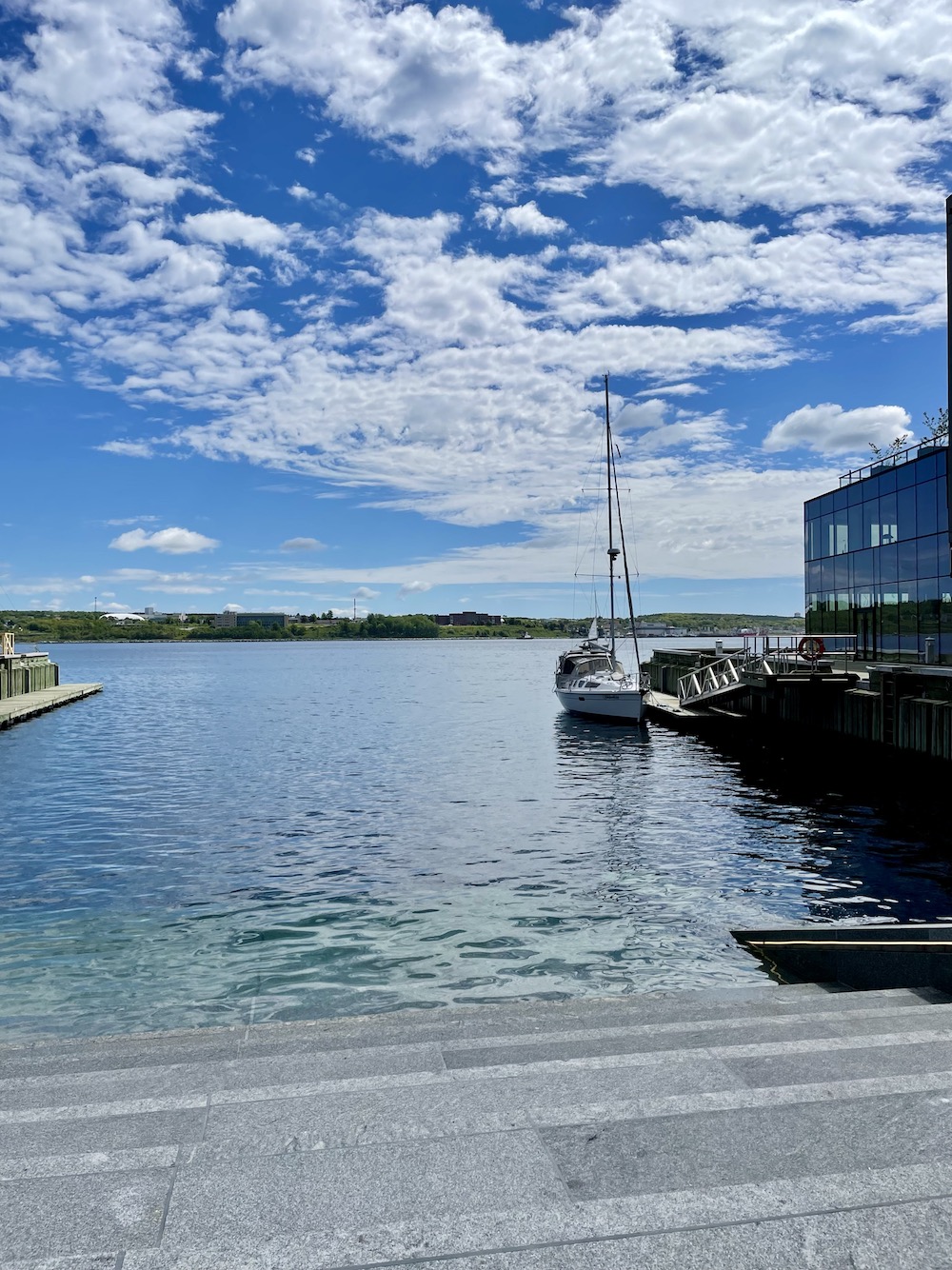 Folks can touch the Atlantic Ocean by walking down these steps. (Hanna McLean/Daily Hive)

Drift and its next-door neighbour Bar Sofia, a new hot spot for Latin fare, as well as Café Lunette, a Parisian-inspired bistro located around the corner, are all part of Freehand Hospitality’s growing portfolio of unique chef-driven concepts opening downtown.

There’s a whole slew of new food and beverage venues opening in the coming months, like the hospitality group’s wine bar, Peacock, and Daryâ, a future destination for Eastern Mediterranean eats.

We’re told all said and done the Queen’s Marque area will have just over 10 different places to eat and drink, including a high-end concept that’s currently under wraps, which we’re particularly excited about visiting once it launches. 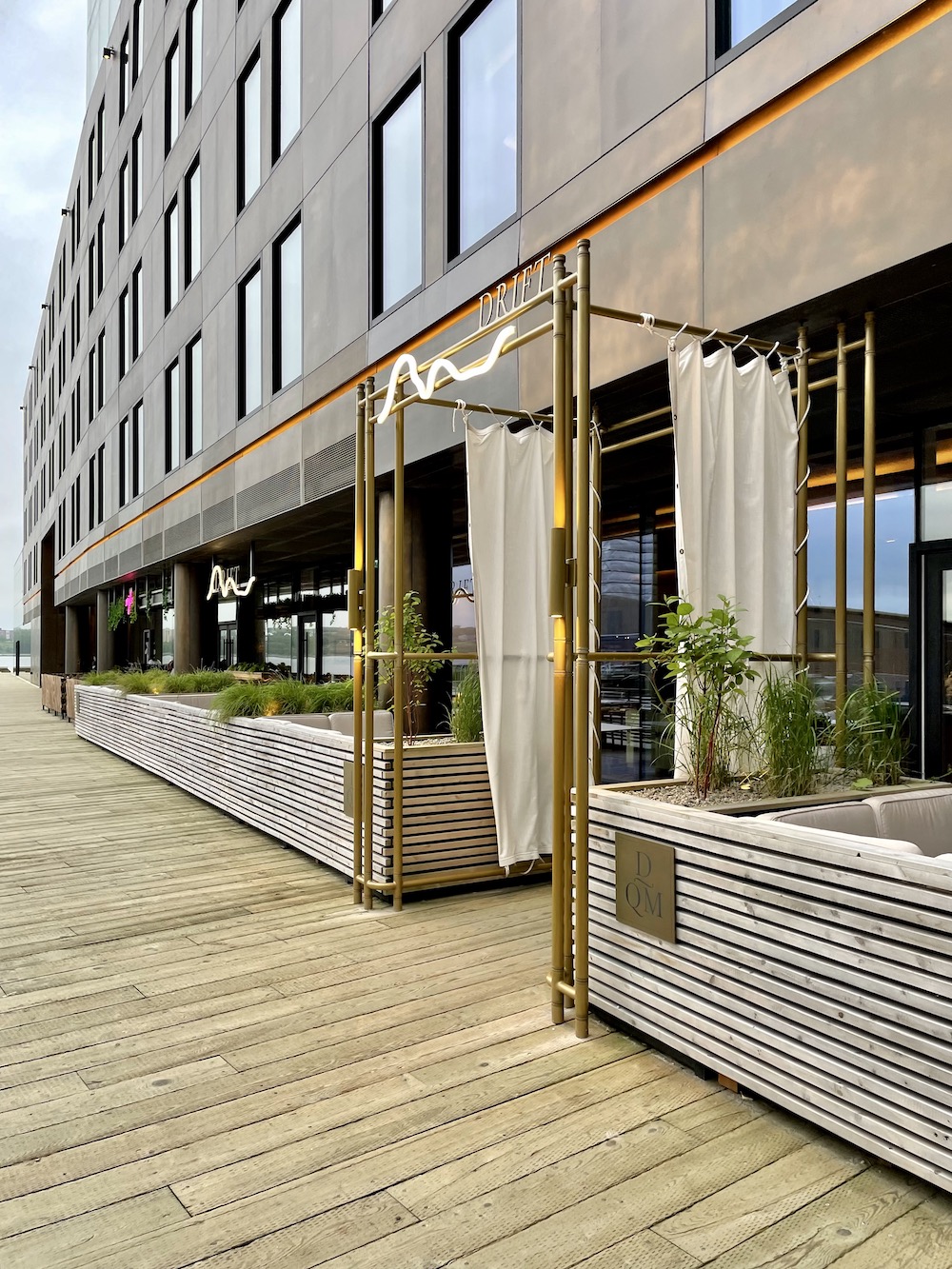 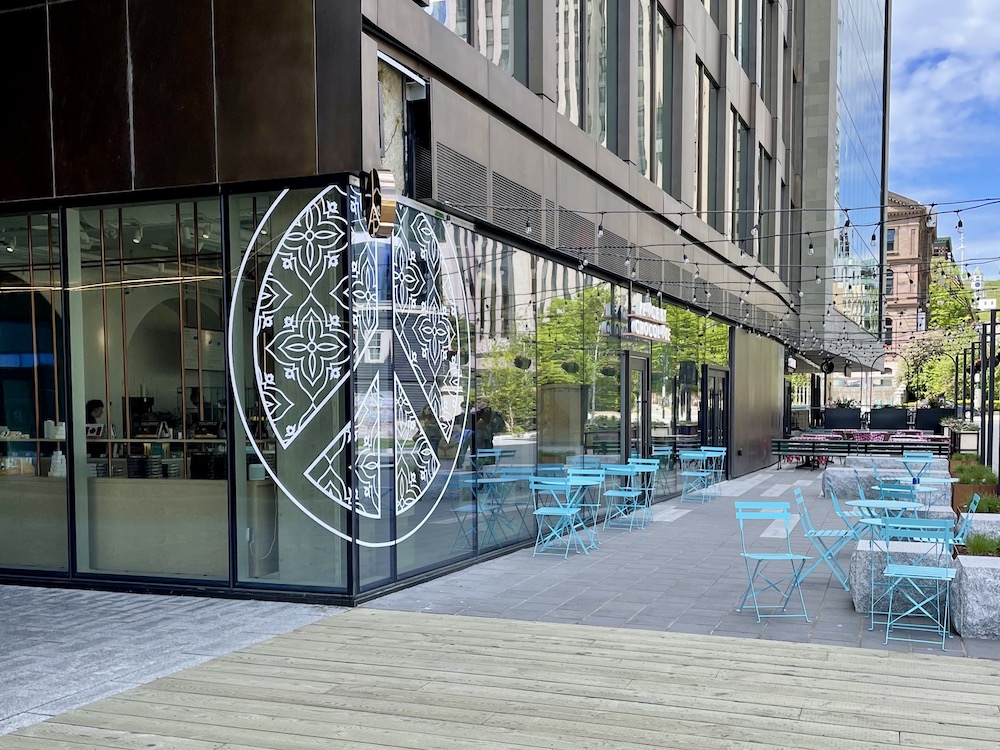 While we can’t wait to see all these delicious concepts come to fruition, the ones we tried during our visit were certainly enough to wet our whistle.

Drift, in particular, is a can’t-miss. We’d be remiss not to mention the outstanding in-room dining service available from this restaurant for hotel guests as well.

Breakfast and brunch (or any meal or snack) can be enjoyed in-room or dine-in downstairs depending on your preference. 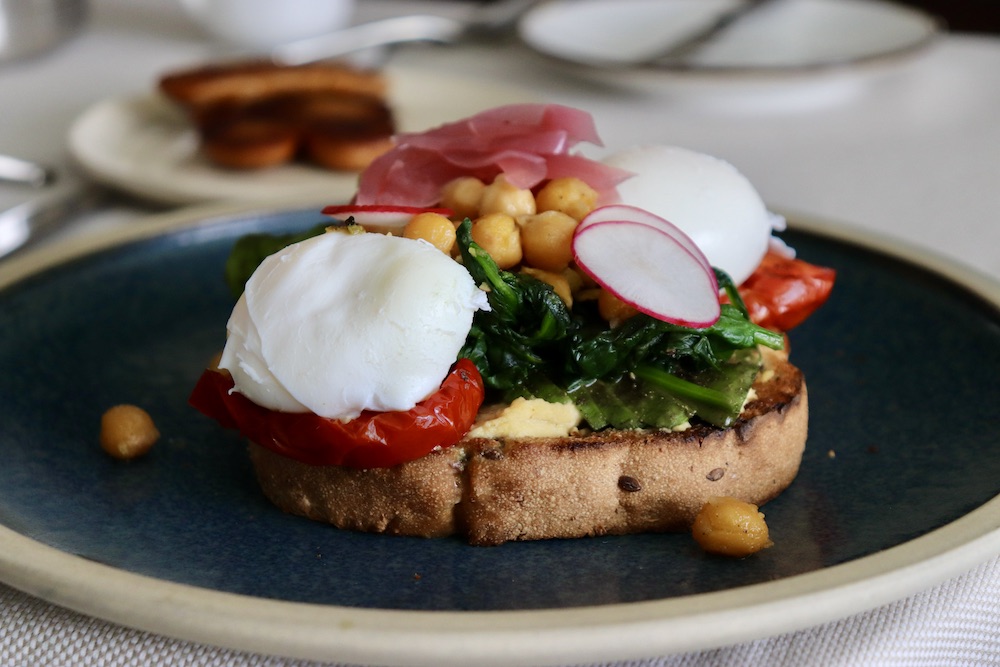 The Hipster, an offering from Drift’s brunch menu you can order in-room. (Hanna McLean/Daily Hive)

But, if you’re aiming to ditch what might be the comfiest hotel robes we’ve ever worn and head down to the cozy dining room, you’ll be in for a treat. 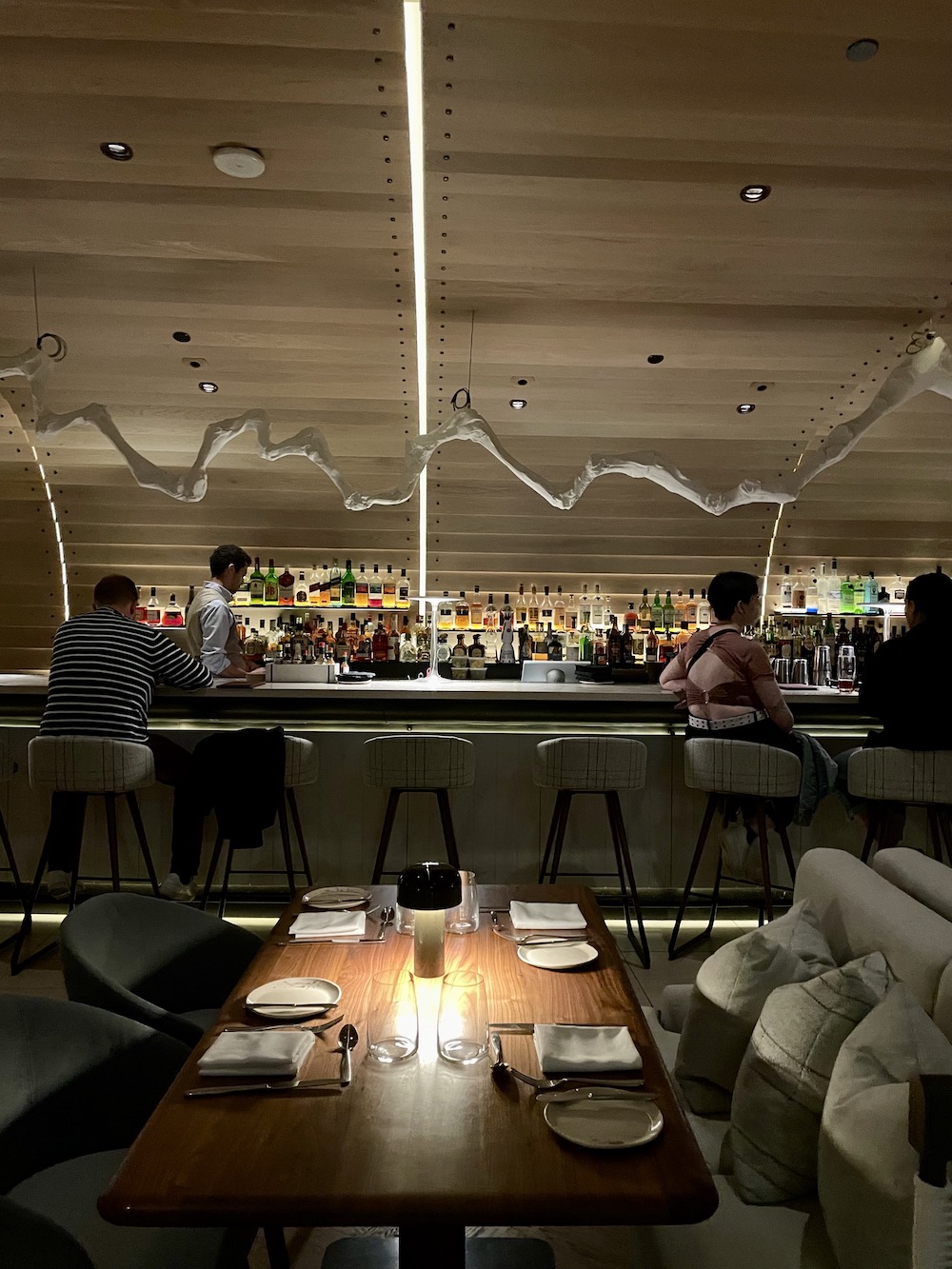 At Drift, you’ll find a menu of modern eats inspired by Atlantic Canadian classics in a room that carries the homage to shipbuilding traditions over from the rest of the hotel with its seamless design.

Located on the main level of the newly built hotel, the restaurant is described as “a culinary love letter to this region,” and Chef Anthony Walsh demonstrates this through the menu. 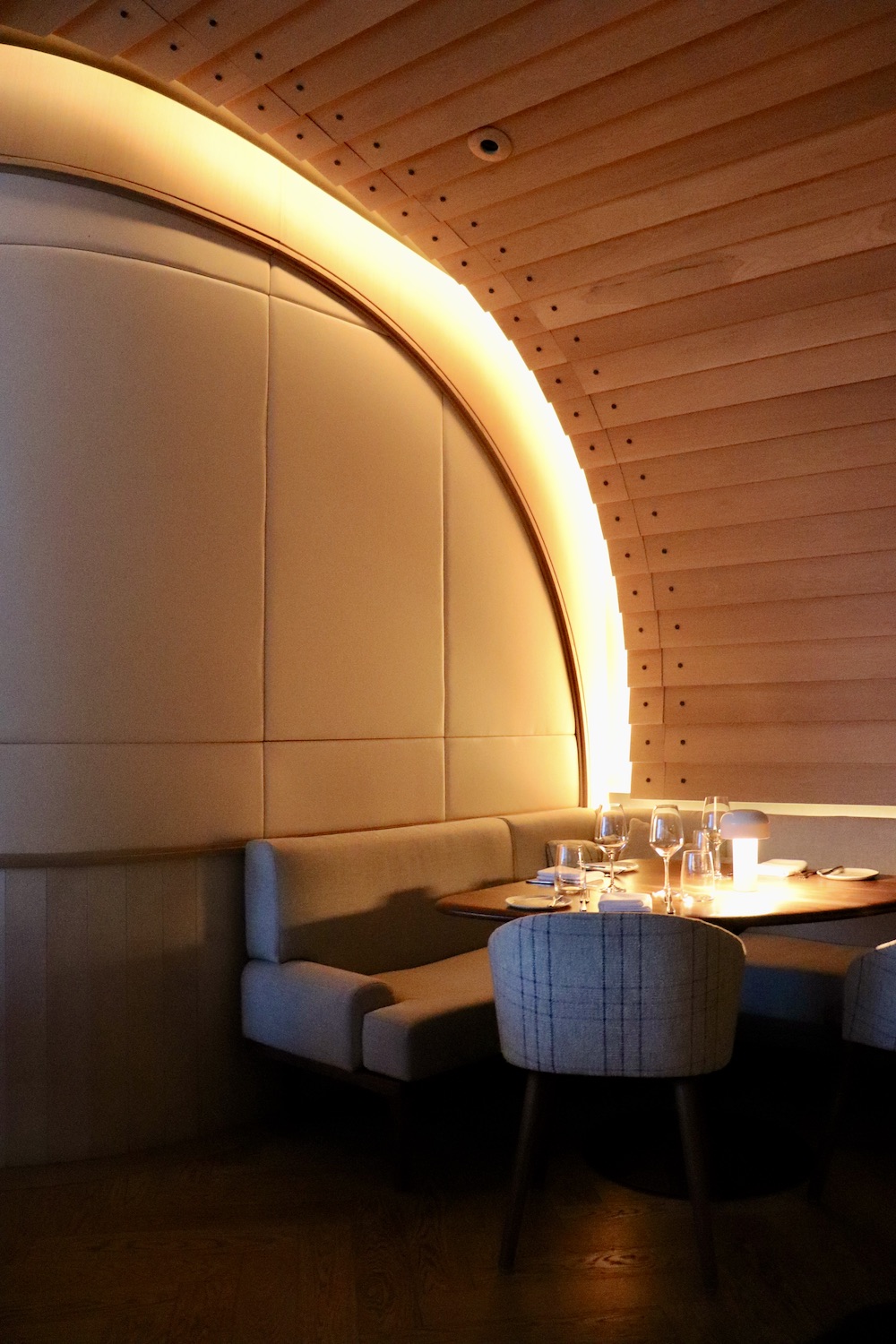 As the hotel’s main restaurant, you can expect breakfast, lunch, dinner, and everything in between to be offered a Drift. 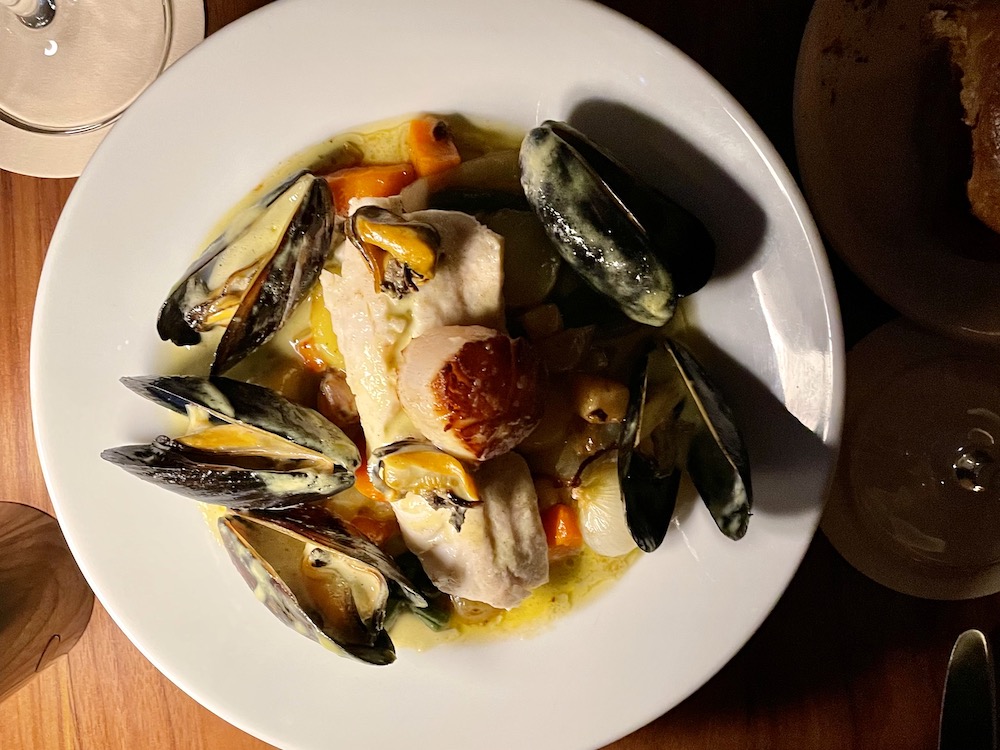 Naturally, there’s a bounty of fresh fish and seafood dishes up for order, including highlights like the Hodge Podge, a traditional stew-like dish common in Nova Scotia.

Made from haddock, scallops, Nova Scotia mussels, wax beans, potatoes, leeks, and root vegetables, this delicious concoction truly lives up to its name. 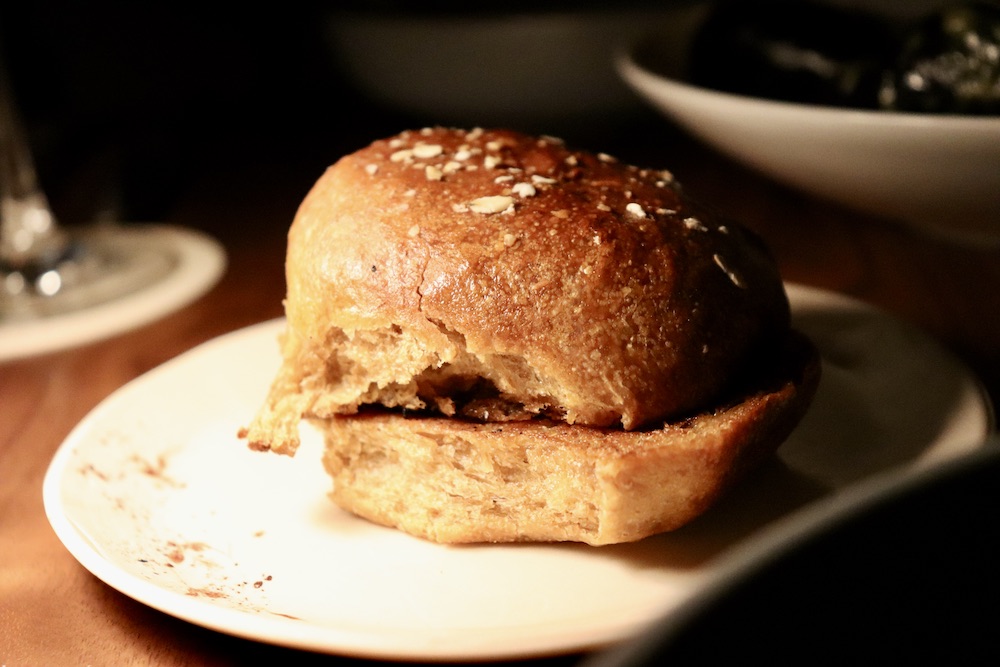 Typically no one needs to tell us twice to try the house bread, and in this case, we were glad we didn’t skip. 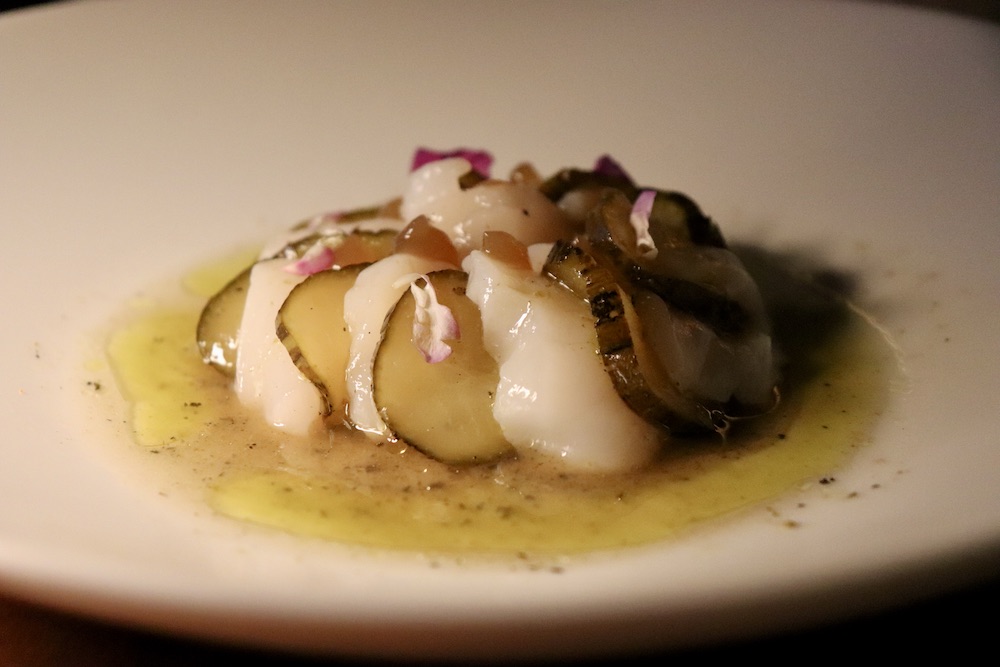 In addition to hearty mains like slow-cooked Sustainable Blue Salmon, the Mushroom Tart, and the Nova Scotia Lamb Roast, there’s a selection of brightly flavoured raw bar offerings up for order here.

We tried the Iced Digby Scallop Crudo served with charred dill pickles and Sherry, as well as the Tuna Sashimi with sea buckthorn and charred jalapeño. Both were top-notch. 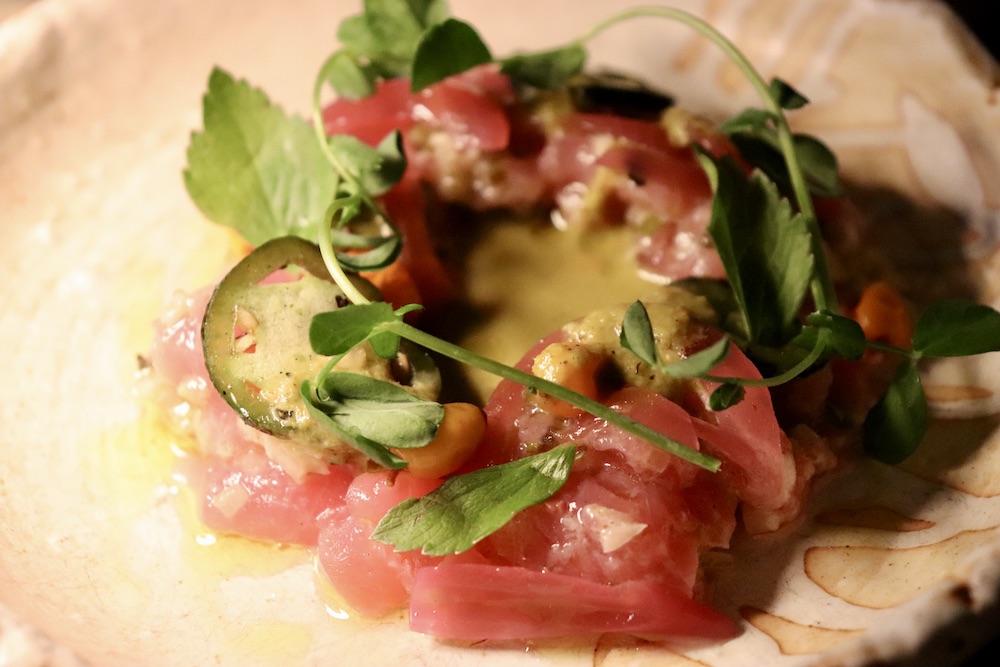 Once you eat your way through the starters, mains, and carefully curated drink program (including bottles of Alexander Keith’s, of course), there’s a short and sweet dessert selection to check over.

If you’re in the mood for something different for your final course, we suggest ordering the grunt.

The blueberry variety here is served with vanilla bean ice cream and is a refreshing departure from more common sweet treats we typically find on menus. 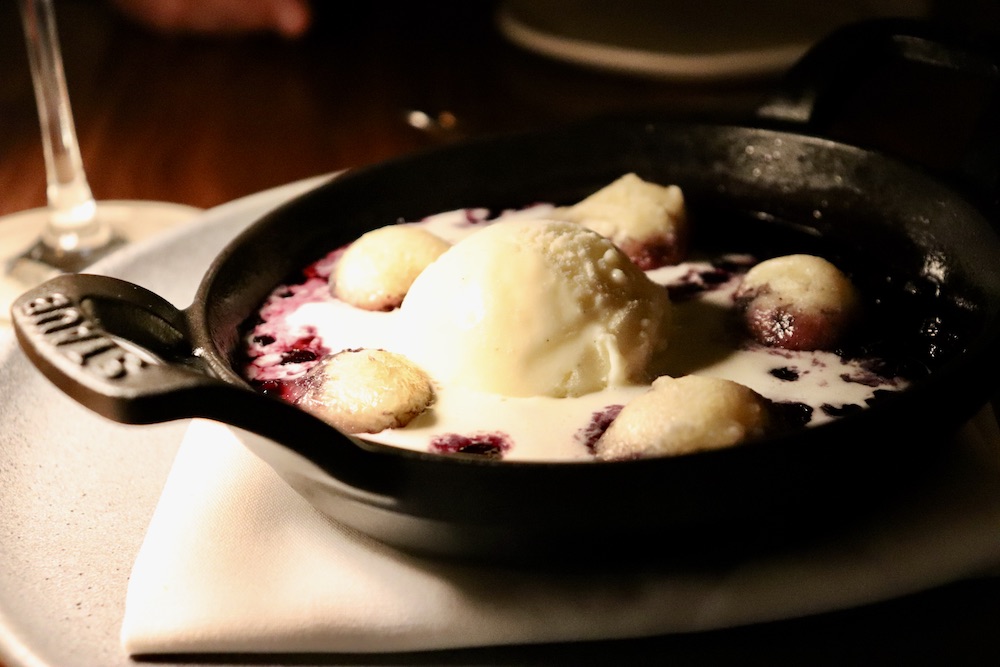 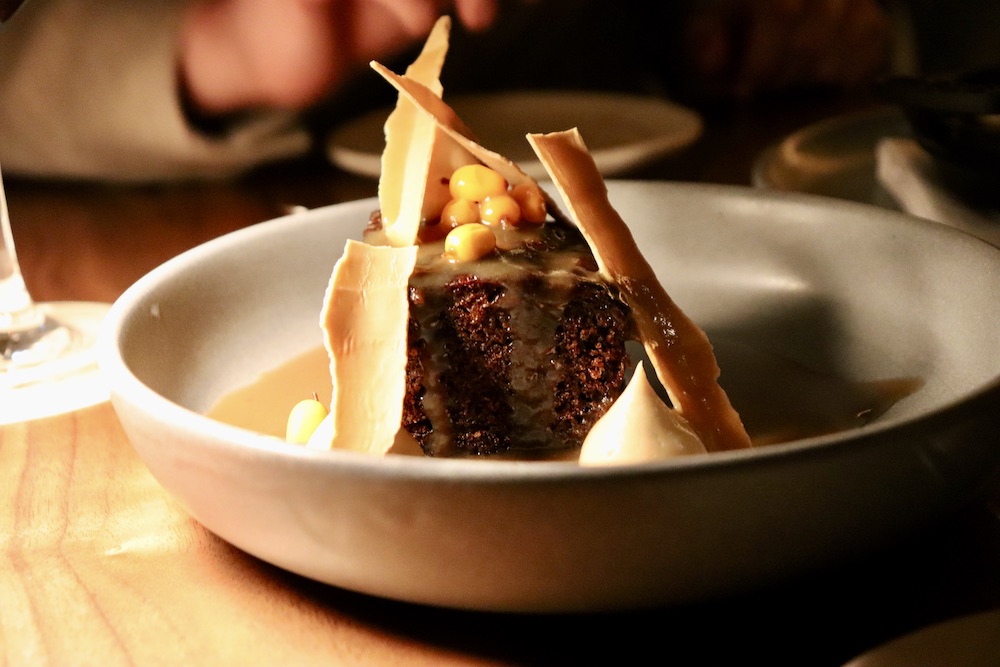 There’s clearly been a ton of thought and heart poured into the details of this restaurant, just like the hotel it’s situated in.

From the large yet cozy dining room’s design, featuring floor-to-ceiling marble fireplaces, soft lighting, and of course, a waterfront patio for the warmer days, everything has been meticulously planned. 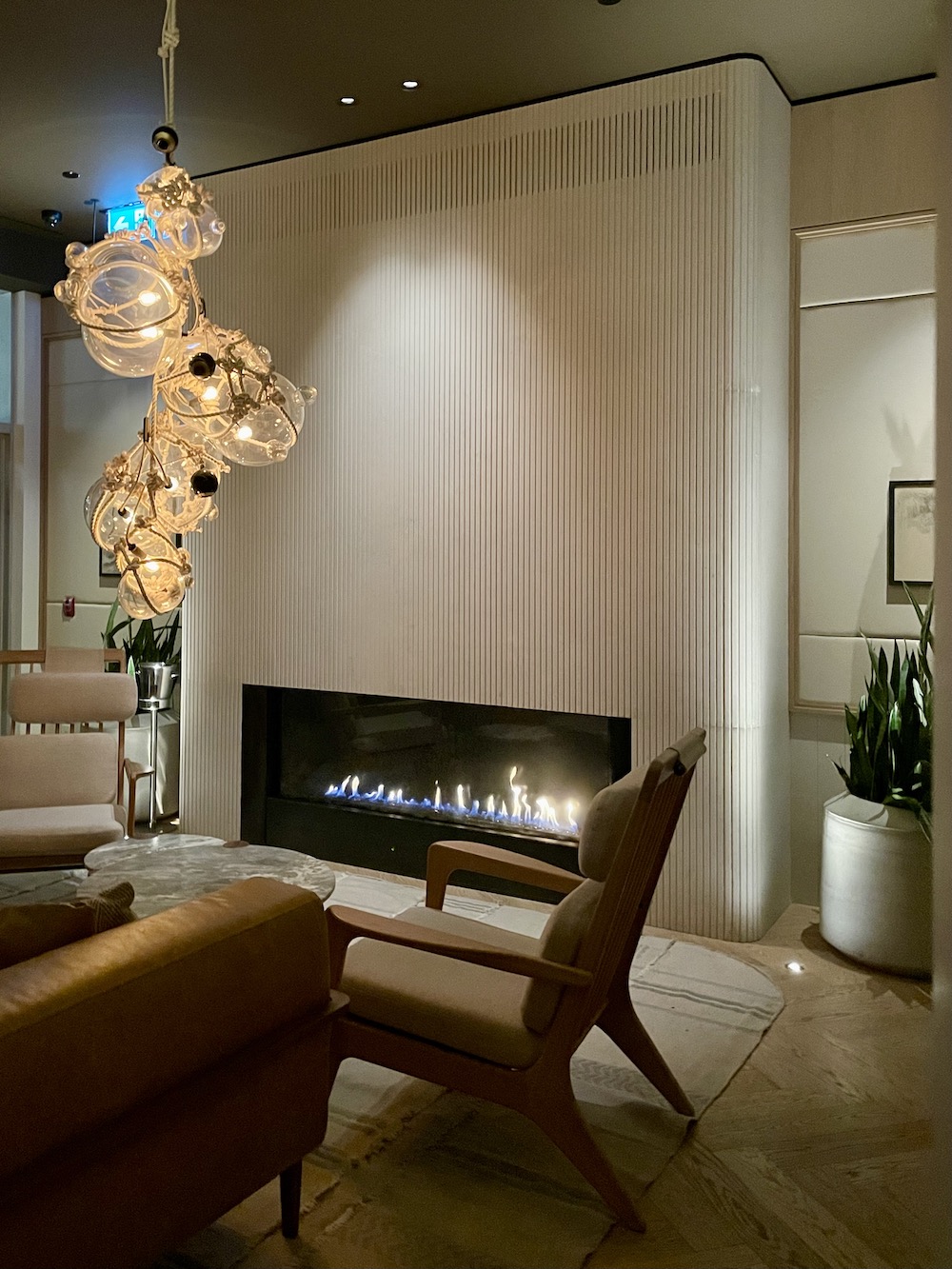 It’s tough to leave but eventually, you’ll likely find yourself floating in between the end of dinner and your hotel room, and we’ve got the perfect solution for this timeframe.

BKS is Muir’s third-floor “secret” speakeasy. Currently, it’s only accessible to guests of the hotel and members, and it offers some really great premium cocktails and small plates in a super sleek and luxurious room. 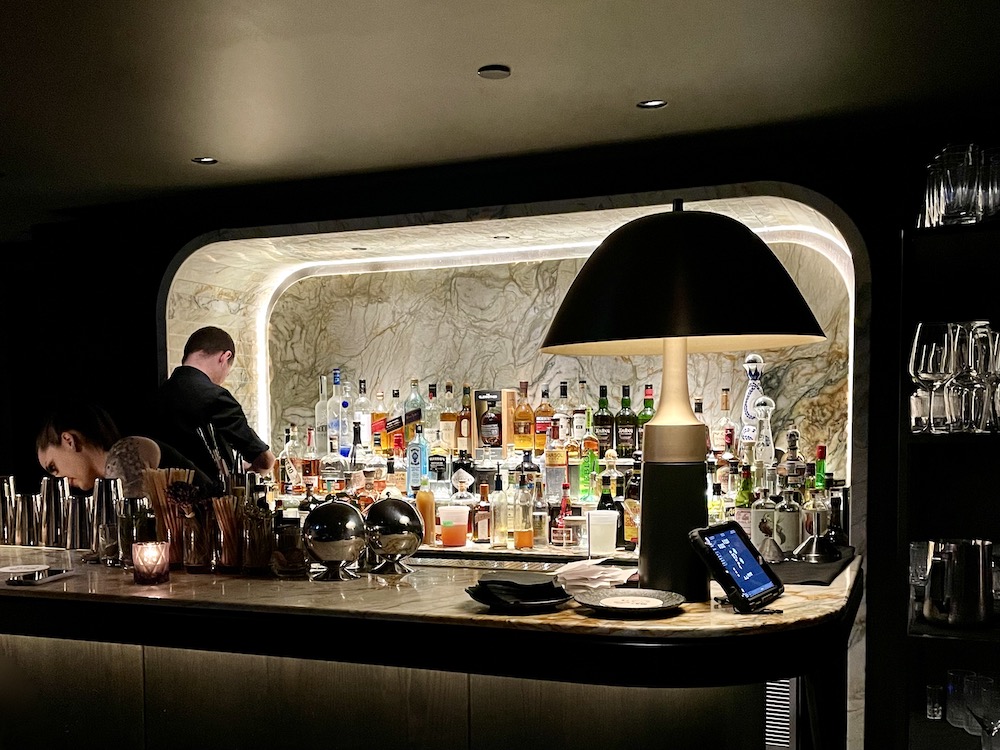 You can enter through an unassuming door and step into a swanky space featuring upholstered banquettes and even a private harbourside terrace.

There’s really no better way to wrap up the night than with a nightcap at BKS, conveniently located a hop, skip, and a jump from your fluffy hotel bed. 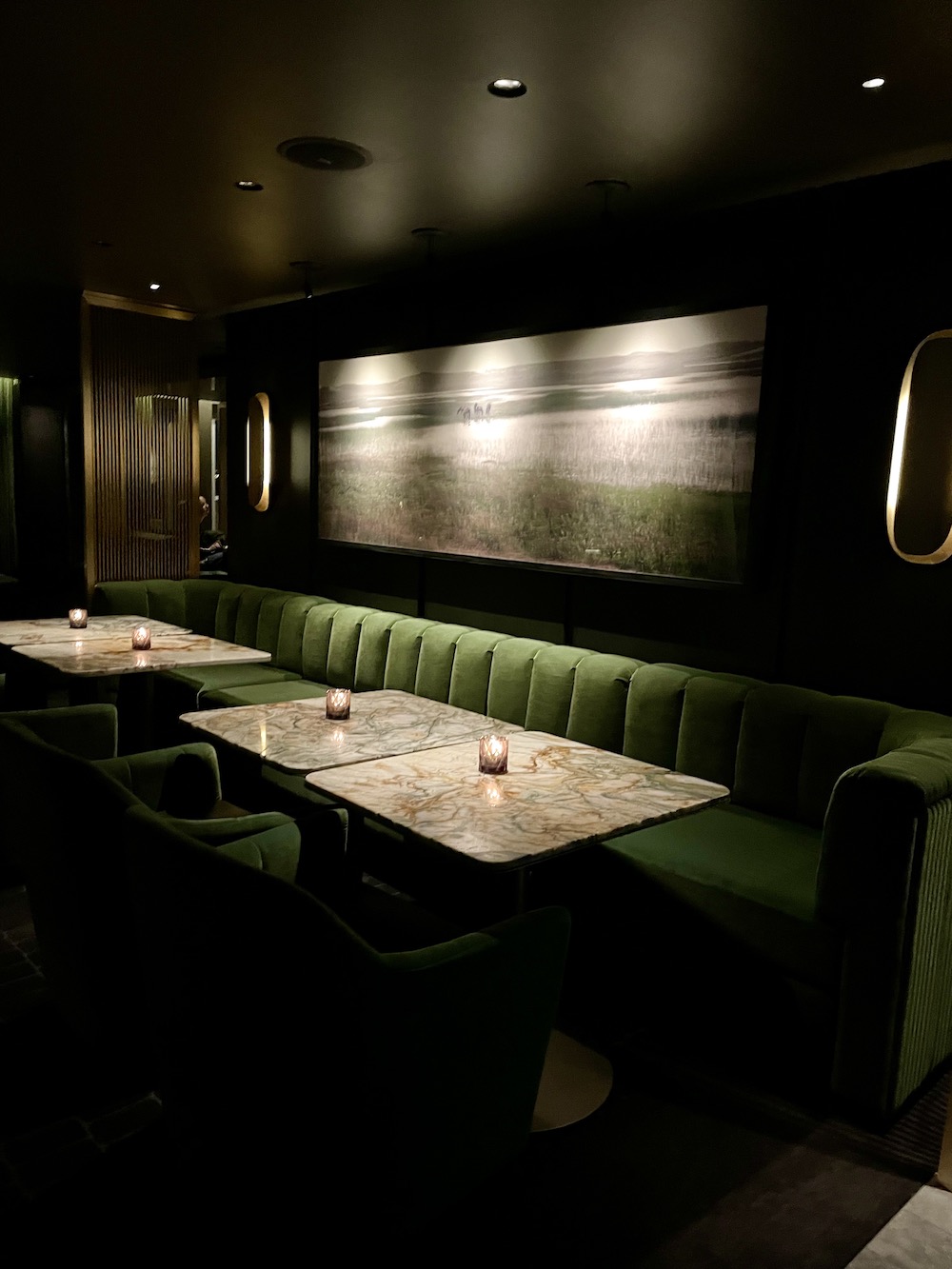 All in all, we are pretty excited about Muir and all of its offerings.

It’s dead centre in the middle of a quickly expanding district that feels like a welcome addition to the city’s landscape, especially to those of us who are familiar with Halifax from years past. 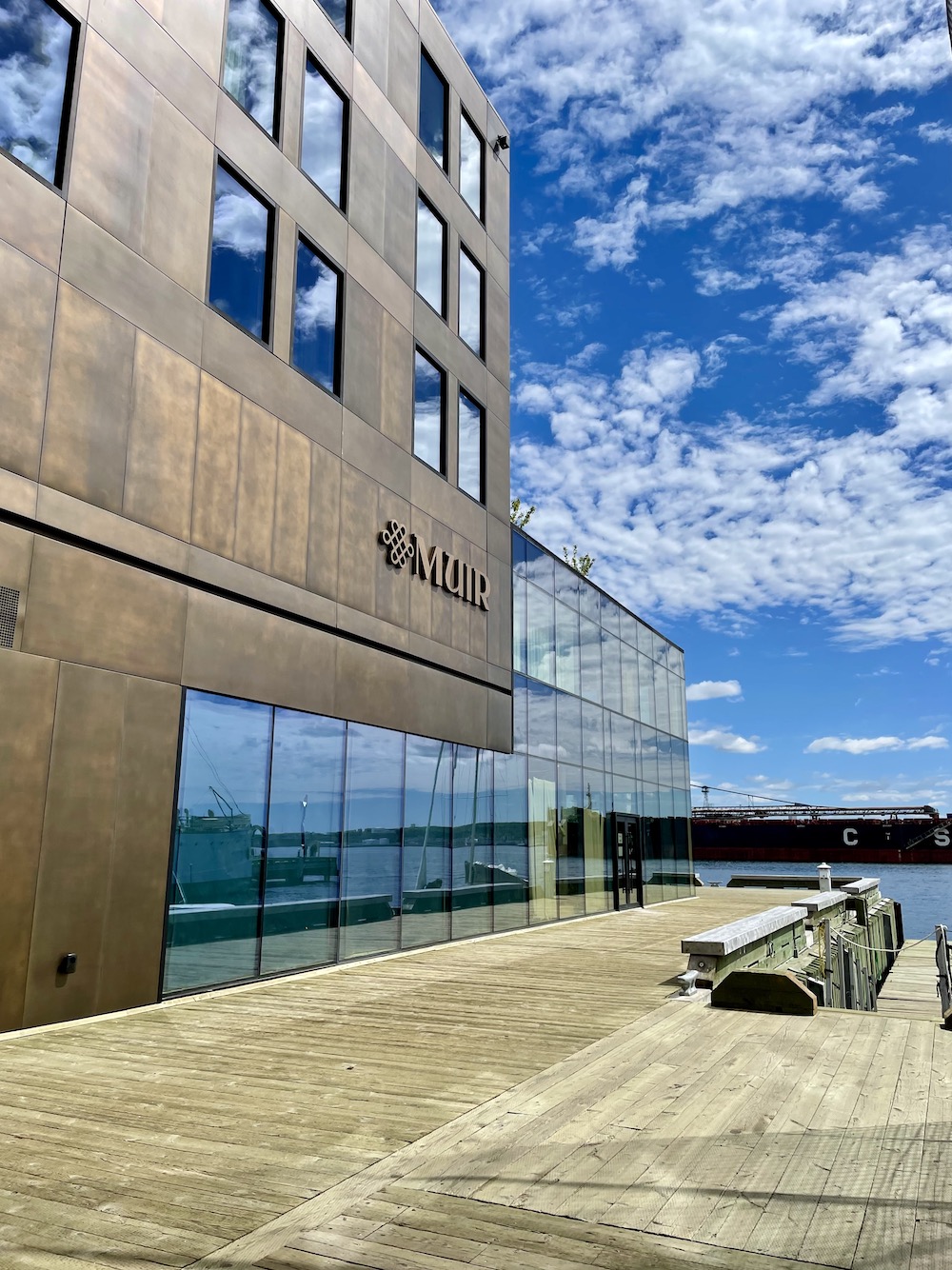 The main floor of this building will be the future home of a fine dining restaurant concept. (Hanna McLean/Daily Hive)

It’s exciting to see the food and beverage concepts that have opened already (read more about those here) as well as hear about plans for the new ones.

We can’t wait to return and experience the cultural district finished in its entirety and to see how Muir has settled in as the crown jewel of the Queen’s Marque.

The author of this story was hosted by the Muir Hotel Halifax.