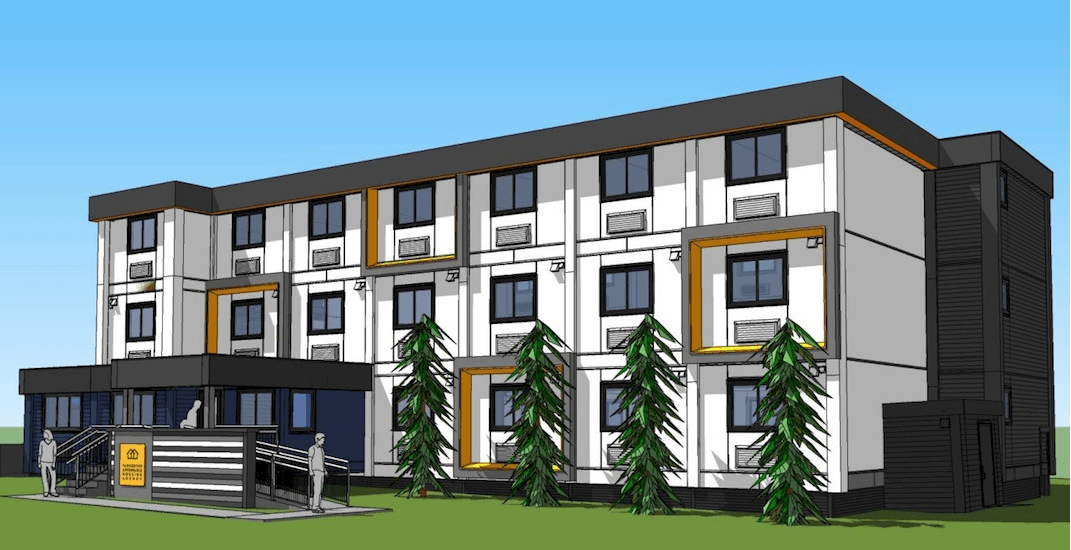 The design concept for the modular housing units on Powell Street. (City of Vancouver)

After identifying it as a potential site in November of last year, the City of Vancouver has approved the development permit for the construction of temporary modular housing at 525 Powell Street (formerly 501 Powell St.).

The new site will be home to 39 new units of housing for women in the Downtown Eastside.

In a release, the city said this latest approval is part of the $66 million commitment from the provincial government to build 600 new units of temporary modular housing for the homeless in Vancouver.

The housing will be operated and managed by Atira Women’s Resource Society, which will also provide support services to the tenants 24/7, including life skills training, counselling, meals and referrals to health and community-based programs.

The temporary modular housing building, which will contain 39 units, will be constructed by Horizon North. Each new home will be approximately 250 square feet and contain a bathroom and kitchen. A total of seven units will be fully wheelchair accessible.

The building will also include amenity space and a communal kitchen to encourage social interaction and provide space for the residents to gather.

There will also be laundry facilities, a staff room, an office, and meeting rooms.

It is anticipated construction will start in early March and the building will open in May.

As part of the development permit process, the City hosted a community information session with approximately 60 people attending. Notifications were distributed within a five-block radius of the site beginning on December 1, 2017, along with fact sheets to provide additional information to residents and businesses.

The City received a total of 15 comment cards and four emails from the public. Of those in favour, there was a fair amount of support for the City in taking the initiative to deliver this type of housing and a number of respondents remarked on the need for more temporary modular housing.

Of those in opposition, there was concern about other non-profit and social housing developments nearby, the future management of this building and, its impact on the surrounding neighbourhood.