The provincial government is moving forward with a major redevelopment project for New Westminster’s Royal Columbian Hospital, one of Metro Vancouver’s largest hospitals.

A $258.9-million mental health and substance use treatment centre will be added to the hospital campus as the first phase of a three-phase hospital redevelopment project. The Fraser Health Authority on Friday announced the request for qualifications, which is the first stage to find a private sector team that will design and build the expansion.

“This redevelopment project will serve the health care needs of British Columbians for many years, and moving forward with the RFQ is a significant milestone in getting work underway,” said B.C. Health Minister Terry Lake in a statement.

There will be a total of 75 psychiatry beds – an increase of 45 psychiatry beds currently found at the hospital’s Sherbrooke building, which will be demolished when the new four-storey facility is complete.

Services found at the new facility will include educational and teaching spaces, outpatient psychiatric clinical services, inpatient psychiatry for short-term assessment, a psychiatric high acuity unit for adults with acute and severe psychiatric disorders such as psychotic states and suicidal behaviour, and a psychogeriatric unit for people over 65 years old and who are affected by dementia or other serious mental illnesses.

In addition to the treatment facilities, the facility will also consist of an energy centre and 456 stalls of underground parking. An overpass bridge will provide a direct connection to the rest of the hospital campus.

The building will be located on a sloped site currently used as a parking lot. Site preparation for the new facility will begin this fall. Construction on the new psychiatric facility is anticipated to begin in 2016 for a completion in 2019.

Future phases of the hospital redevelopment will include the demolition of several hospital buildings to construct a 350-bed acute care tower with a new and expanded emergency department as well as renovations to the existing Health Care Centre and Columbia Tower. 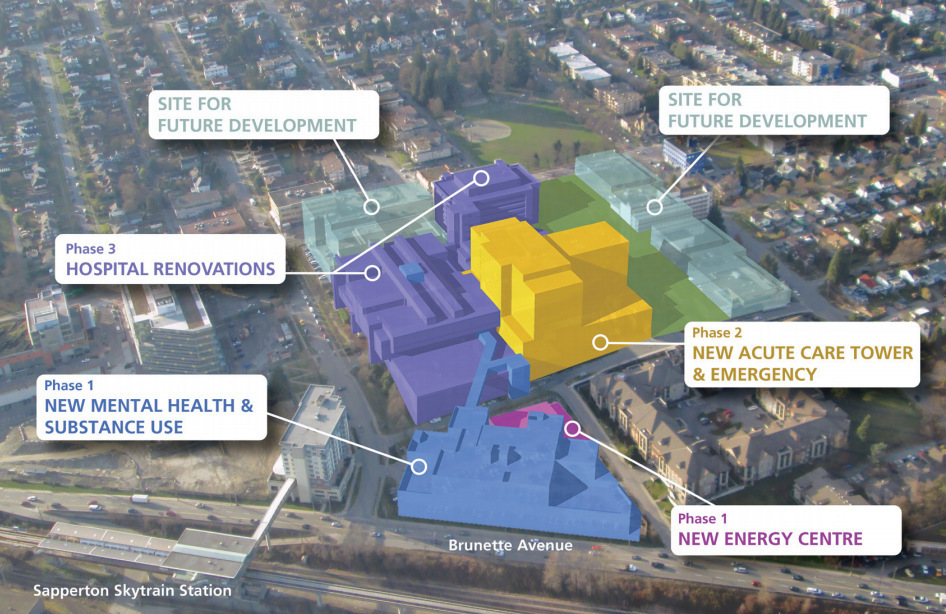