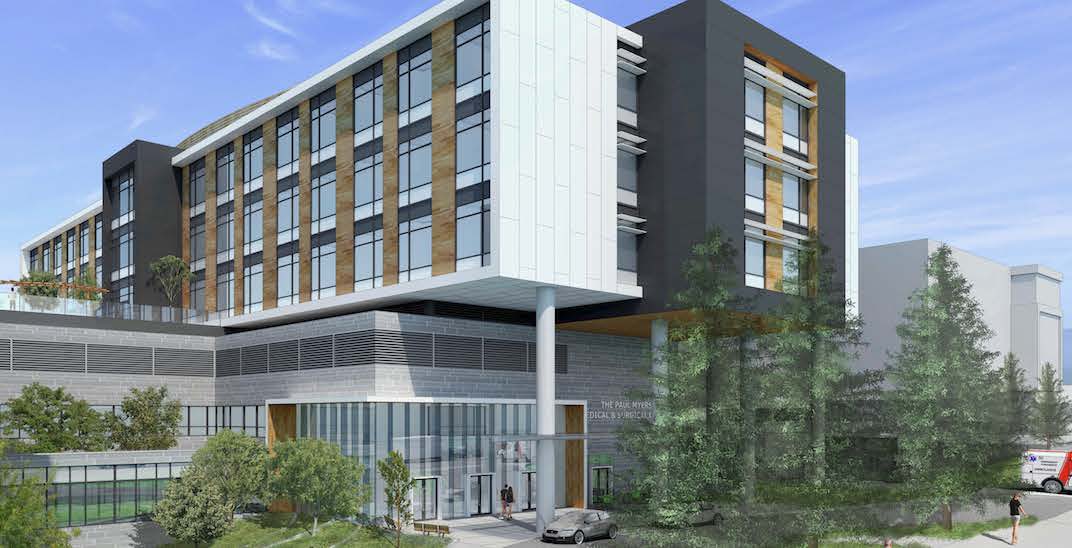 After years of planning and fundraising, and recent site preparation works, construction has officially commenced on a new acute care tower for Lions Gate Hospital in North Vancouver City.

The new six-storey tower will be built on the former footprint of North Vancouver General Hospital, previously known as the Activation Building, demolished in 2017.

There will be eight operating rooms, and a pre-operative and post-operative care area, including anesthesia intervention and isolation rooms. The building will contain 108 beds in 84 single rooms, with all featuring ensuite washrooms.

“It’s an exciting day for people in the region as shovels are going in the ground for the new tower,” said BC minister of health Adrian Dix in a statement.

“People will be able to get quality, publicly funded health care in a state-of-the-art facility, which will also help attract and retain health-care workers in the Coastal Community of Care as they prepare for any challenges that may lay ahead.”

Currently, Lions Gate Hospital, which operates under the jurisdiction of Vancouver Coastal Health (VCH), has 254 beds, eight operating rooms, and a range of diagnostic services and equipment. It is the hospital for the service area spanning the entirety of the North Shore, as well as the Sea to Sky corridor, Sunshine Coast, Powell River, and Bella Bella and Bella Coola.

The entire expansion project carries a cost of $310 million, which is funded by the provincial government, VCH, and Lions Gate Hospital Foundation.

The hospital foundation’s $100 million contribution comes entirely from its fundraising campaign. The new tower is named after Paul Myers, a North Shore plumbing businessman and philanthropist, who donated $25 million in 2015.

Construction is expected to reach completion in 2024.

This is the latest construction start on a wave of major hospital expansion projects in Metro Vancouver.

Earlier this month, demolition began on the Cascade building at Burnaby Hospital to prepare the site for the hospital’s $1.4-billion redevelopment. Upon the completion of demolition in March, construction will begin on phase one of the new hospital, and preparations will advanced for the proposed future phase two patient tower and cancer centre.