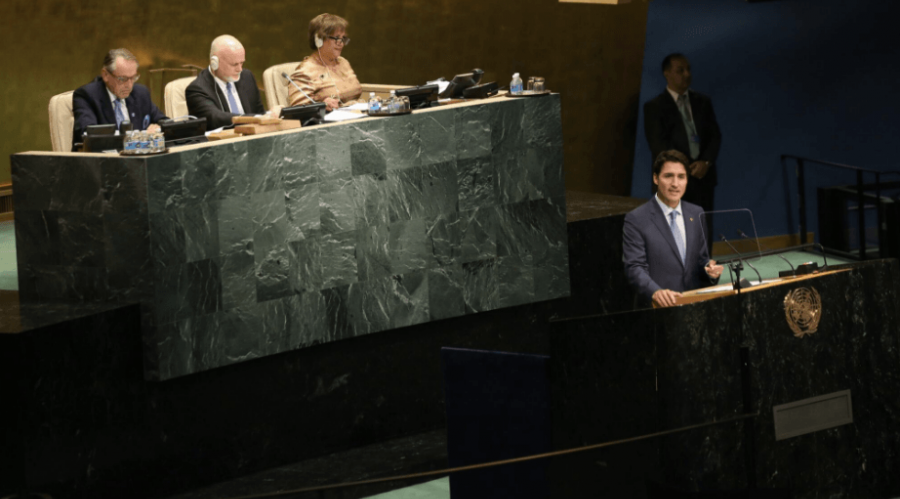 Trudeau — who is representing Canada’s bid for a temporary seat on the United Nations Security Council — made several not-so-subtle jabs at divisive political rhetoric during his address.

Trudeau went on to make clear that Canada is committed to “re-engaging in global affairs through institutions like the United Nations.”

“We’ve done all this – and will do much more — because we believe we should confront anxiety with a clear plan to deal with its root causes,” he said.

Let’s focus on what brings us together, not what divides. Watch my address to the @UN General Assembly today: https://t.co/H2qZ5o7QGH #UNGA pic.twitter.com/nZycIp5Oj3

The prime minister highlighted Canada’s efforts to welcome over 30,000 Syrian refugees during the past several months, but he also admitted Canada has not been perfect.

“And make no mistake: we have had many failures, from the internment of Ukrainian, Japanese and Italian Canadians during the World Wars; to our turning away boats of Jewish and Punjabi refugees; to the shamefully continuing marginalization of Indigenous Peoples,” he said.

But Trudeau reassured the UN General Assembly that Canada is learning from its past and continues to value diversity while refusing to participate in fear-mongering politics.

Canada has a rocky past with the UN General Assembly.

The former Conservative government did not always see eye-to-eye with the Assembly. Former Conservative foreign affairs minister John Baird even went as far as to say the world body was a “debating club for dictators.”

Six years ago, Canada lost its bid for a seat on the UN Security Council.

Last March, Trudeau announced that Canada will make a bid for a seat on the UN Security Council for a two-year term starting in 2021.