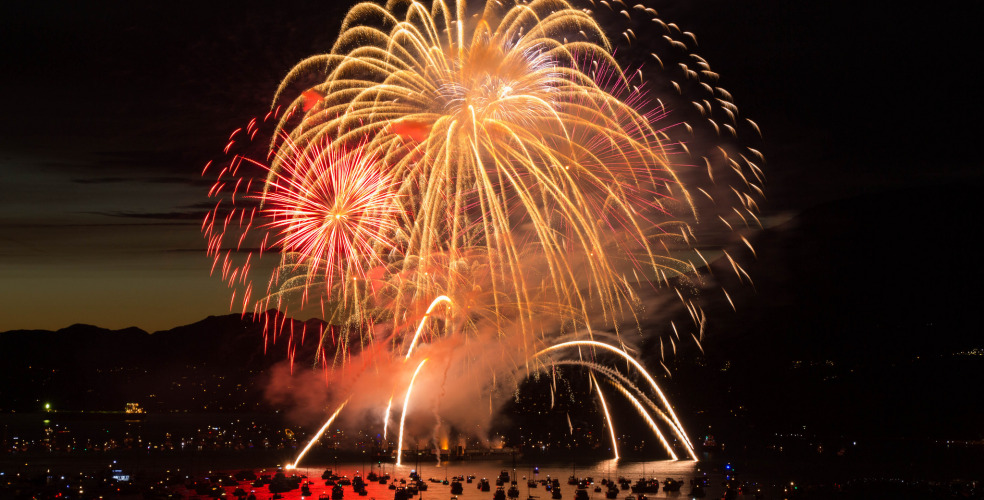 Vancouver’s pinnacle summer event returns with three nights of fireworks during the last week of July.

Of special note, the Walt Disney Company will produce this year’s display for the United States and this will be the first time a team from the Netherlands will compete in the Celebration of Light.

As usual, the fireworks will be launched from a barge just off the shores of English Bay Beach in downtown Vancouver. Every night, nearly 4,000 fireworks are launched and synchronized to music through simulcast on LG 104.3 FM.

Tickets for private viewing areas at The Keg Lounge on English Bay’s bathhouse roof, The Inukshuk Lounge at the tip of the English Bay peninsula, and the hillside YVR Observation Deck go on sale today.

Although a spot at a downtown Vancouver beach provides the best views, the fireworks are also visible from Vanier Park, Kitsilano Beach, Jericho Beach, and Spanish Banks.

For those heading to English Bay Beach, the nightly concert series will return this year with Loverboy taking to the stage as the headliner of this year’s LG 104.3 FB Shorefest. More artists will be announced in the coming months.

There will also be a nightly food truck festival with over 50 food trucks.

Over one million people watched last year’s fireworks shows, including 500,000 people during Team Canada’s winning display. Canadian teams have won the title four times over the past decade, more than any other country. Other past recent winners include China, Spain, Japan, and Italy.

Crowds for the summer fireworks festival generate $37 million in local economic activity each summer. The fireworks have been the city’s signature annual event since the inaugural event in 1990.

“The Honda Celebration of Light has come a long way in the past 25 years, and we celebrated that with our silver anniversary last year,” said Paul Tilbury, co-chair of the Vancouver Fireworks Society, the non-profit organization that puts on the annual fireworks festival, during a press conference this morning.

“We are the quintessential event of British Columbia’s summer. We have families who travel from all over the province and beyond to attend this magical event. Our festival is so woven into the fabric of Vancouver that for so many people, this is a can’t-miss event that speaks to the histories of their families.”

As a highly enthusiastic supporter of Vancouver’s events, arts, culture, and nightlife scene, Vancity Buzz is proud to announce that it is a Media Sponsor of the 2016 Honda Celebration of Light.