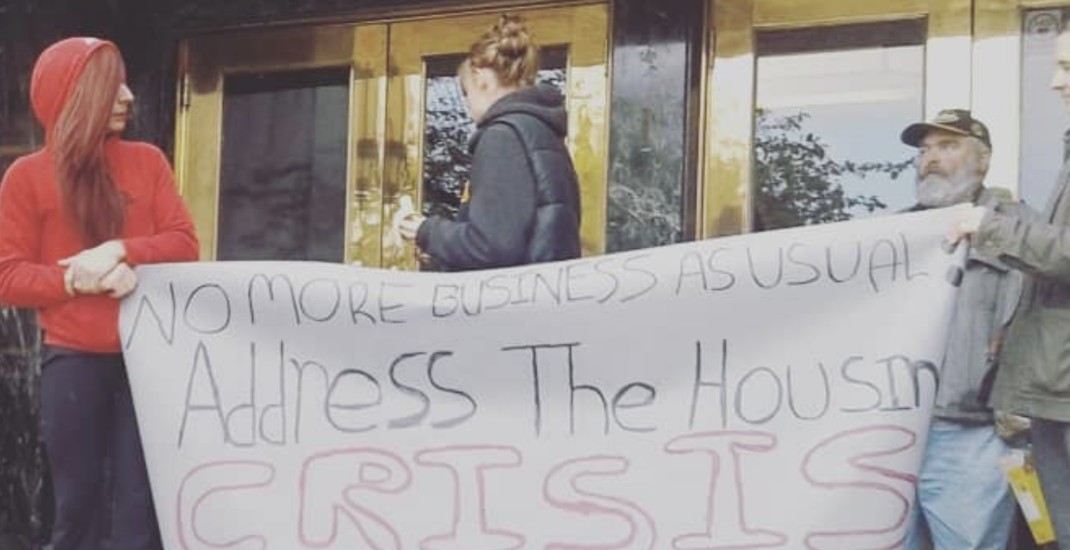 Protesters calling for action on housing and homelessness have blocked the entrances to Vancouver City Hall this morning, forcing a shutdown of the building.

Protesters from the Our Homes Can’t Wait Coalition (OHCW) said they aim to shut down the office’s activity for the entire day in retaliation to Mayor Gregor Robertson’s broken promises regarding affordable housing at 58 W. Hastings Street.

“We, the poor and the homeless of the Downtown Eastside will not sit idly as our elected officials deprive us of the housing we need. We are not a statistic; numbers to be counted and shuffled around in the attempt to remake the city for the rich. We will fight for our lives and our right to live with dignity. There will be no business as usual at City Hall on May 1 unless our demands are met,” said the Coalition in a statement.

Social media posts on Facebook and Twitter show a blockade of protesters outside of City Hall. Vancouver Police are also on scene.

The demonstrators also temporarily took their protest to the city’s permit office across from the street.

Vancouver City Hall has now closed due to the ongoing protests.

“Due to the protestors continuing to block entrance and exit to City Hall, it is currently not possible to hold a public council meeting,” said the City of Vancouver in a statement.

“City Hall is still inaccessible, and we continue to ask everyone to be patient and calm as we work to resolve this.”

According to the City of Vancouver, a private City Council meeting will take place at noon today.