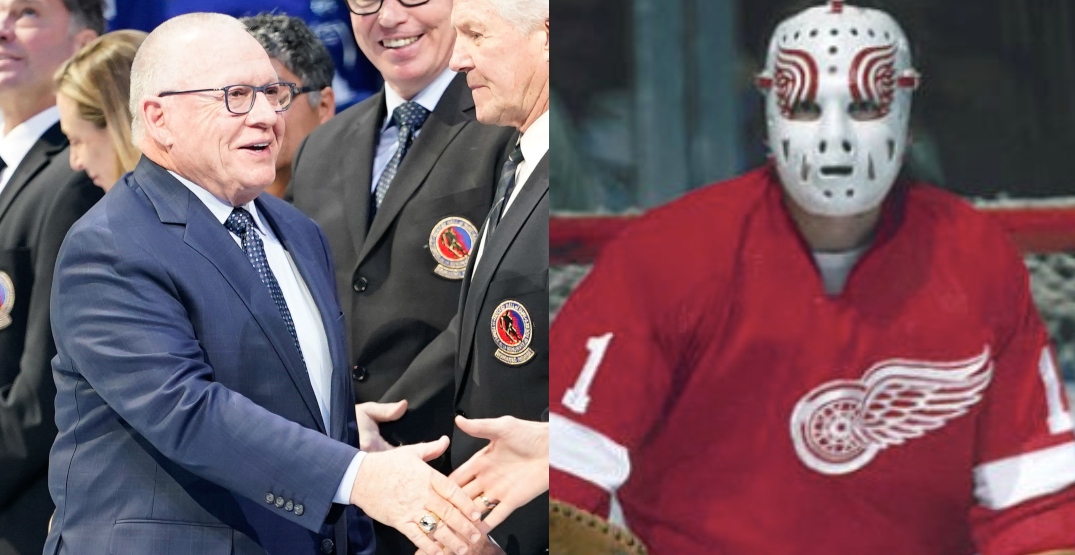 The former Pittsburgh Penguins president and GM certainly has his work cut out for him with the Canucks. Here are seven fun facts you should know about the 72-year-old executive.

Boudreau played 141 NHL games, scoring 28 goals, during his 17-year pro career. The first of those goals was scored against Rutherford, who played 457 career NHL games as a goalie.

Not only is Rutherford a former goalie and hockey executive, but he’s also a fashion icon.

Back in 1974 when he was traded from the Pittsburgh Penguins to the Red Wings, Rutherford asked his mask maker, Greg Harrison, to paint his mask from blue to plain white.

Famously, Harrison didn’t listen. He painted the mask white, but he also added two wings above the eyes of Rutherford’s mask, and the rest was history.

Jim Rutherford deserves to be in the #HHOF2019 just for playing in this @DetroitRedWings mask pic.twitter.com/vqATN1gYaj

Rutherford wasn’t enthused by the design at first.

“I was very upset. But there was nothing I could do about it,” Rutherford said in an interview. “[I was] playing that night. It was the talk of the broadcast, so I just kept wearing it.”

“I was at the start of goalies having a design on their masks. Lots of people come up to me and say, ‘I remember when you played, I remember your Red Wings mask.’

“I walk away and think, ‘Do they ever remember that I won a game or stopped any pucks?'”

After his retirement from the NHL, his mask was given to the Hockey Hall of Fame. Rutherford would join his mask years later when he was inducted as a builder in 2019.

Goalie masks are used as protection, but they are also a canvas!

The intricate masterpieces of today's netminders that mix personality and art, would not be the same without Jim Rutherford's mask decorated by Greg Harrison. Learn more in this #HockeyTreasures pic.twitter.com/kw64wEx95f

Throughout the 1970s, no goaltender played more for the Red Wings than Rutherford.

Following his trade to the Red Wings in 1974, the Beeton, Ontario native became the team’s number one goaltender for virtually the rest of the decade.

Throughout his career as an NHL general manager, Rutherford has made 141 trades.

Apparently, none of them were tougher than the decision to send goaltender Marc-Andre Fleury to the Vegas Golden Knights

After Pittsburgh won their second Stanley Cup in 2017, in large part thanks to stellar goaltending from youngster Matt Murray, it seemed inevitable that the Penguins would lose Fleury.

“I never liked trading anyone, especially people who helped us win Cups,” Rutherford said in an interview with The Athletic. “But agreeing to send Marc-Andre Fleury to Las Vegas was the hardest thing I ever had to do as a manager.”

“I had a real personal attachment with him.”

Rutherford sent a second-round pick in 2017 to the Golden Knights, in exchange for the agreement that the expansion franchise would select Fleury.

5. Traded Pronger in one of his first deals

Rutherford began his NHL career in a rare role as president, GM, and part-owner of the Hartford Whalers, when he and majority owner Peter Karmanos acquired the franchise back in 1994.

At the time, they had recently drafted Chris Pronger at second overall in the 1993 NHL Draft. Despite Pronger’s talent, he was publicly scrutinized in Hartford after a couple of car accidents, an arrest for being involved in a bar fight, and a second arrest for drunk driving.

He ended up being traded in 1995 for Brendan Shanahan.

That trade was considered a win at the time, but Shanahan disliked Hartford and asked for a trade after one season. He was dealt for Paul Coffey, Keith Primeau, and a first-round pick.

Not quite the package you’d like to see dealt in exchange for one of the greatest players in NHL history. However, the growing trade tree painted Rutherford in a better light. Primeau ended up being dealt for Rod Brind’Amour, who helped the Hurricanes win their first Stanley Cup in 2006.

More than a decade after Rutherford took over the Whalers/Hurricanes franchise, he was rewarded by watching the team he built win their first Stanley Cup in 2006.

He remained with the Hurricanes until he stepped down in 2014. One month later, he joined the Penguins front office as GM, where he helped build the first back-to-back Stanley Cup winner since the Red Wings in 1997 and 1998.

After Pittsburgh’s first Cup win, Rutherford was named the Jim Gregory GM of the Year.

7. Shocked everyone with Pittsburgh departure

Rutherford’s decision to leave the Penguins was so abrupt, that even his own wife (Leslie) wasn’t expecting it to happen.

With his own wife unaware of his resignation, it shouldn’t come as a surprise that no one in the organization expected it to happen. In particular, part-owner Mario Lemieux was shocked by his exit.

While there was never concrete reasoning given for his departure, multiple sources cited that Rutherford wasn’t happy with the firing of his assistant GM and right-hand man Jason Karmanos, who had worked with Rutherford since his days in Carolina.